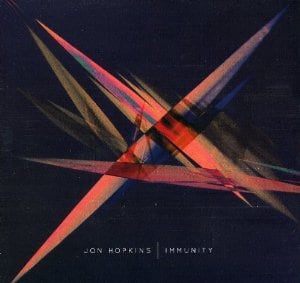 [xrr rating=3.5/5]For most of his career, Jon Hopkins has been a fringe collaborator, an unrecognizable name among the Brian Enos, Imogen Heaps and Coldplays of the music world. Now, with Immunity, he finally proves that he’s a legitimate, confident electronic solo artist who has a clear handle on both assertive dance tracks and ambient noise tracks, sometimes going as far as combining the two.

The front half of Immunity, especially its catchy opening glitch-house track “We Disappear,” serves to set Hopkins’ new material apart from his more sterile previous work. The following track, “Open Eye Signal,” truly impresses and sets Hopkins apart from his contemporaries. A slow, haunting, seeping bass builds louder and louder along with a chorus of voices that’s slightly obscured by ambient noise, all to create a sound that effectively reflects its title. It could well be a soundtrack to waking up slowly and opening your door only to discover something out of the ordinary. The track ends with sharp glitch-house similar to that of “We Disappear,” as if to resemble the first unexpected hiccup of an otherwise beautiful day. Meanwhile, layered third track “Breathe This Air” is essentially a continuation of “Open Eye Signal” until it suddenly stops halfway through, minimal piano chords chiming in the foreground of Hopkins’ echo-laden sonic universe. When the beat picks back up again with the piano strikes in tow, any skepticism you might have previously had about Hopkins’ ability to combine different electronic aesthetics is rendered a moot point.

As much as Hopkins creates pretty music on Immunity, there’s a harsh sharpness to his electronic flourishes that prevents you from becoming hypnotized in just another beautiful universe. This quality is exemplified on the appropriately-titled, angular album centerpiece “Collider,” a track with bass drops that are refreshingly sinister rather than gleeful. “Collider” adds to the futuristic style of Immunity, whose title suggests not necessarily a post-apocalyptic future but rather one whose new diseases require advanced cures and modes of thought. When Hopkins does return to the soft insularity of his previous collaborations and solo work, he comes across emotional rather than impersonal, as on sad piano track “Abandon Window.” The visual and aural associations are few, as the track mirrors the isolated feeling of a lone man listening to the sounds of the wind.

Even if Immunity doesn’t sport a clear theme or set of themes, it’s an exciting release because it displays Hopkins’ penchant for and appreciation of classical music (he’s a classically-trained pianist), forward-thinking pop (the piano beat and melody of “Form by Fireflight” could ostensibly appear on a Radiohead or James Blake remix album) and electronic music history from Steve Reich to Chicago house. With Immunity, Hopkins shows himself to be an artist who’s no longer behind the scenes, but providing his own refreshing spin on what’s come before him.