Vincente Minnelli came to MGM from the stage, recruited by producer Alan Feed after rising the ranks from costume designer to stage director. Naturally, his film debut, 1943’s Cabin in the Sky, plays to his established strengths, with one foot (and four additional toes) planted firmly on the stage as a lonely digit dips into cinematic waters. Actors deliver their lines as if speaking to the mezzanine, while blatantly unreal sets leave plenty of space for the cast to come together in group song. Such traits are not uncommon in old Hollywood films, but a comparison of the theatrical mise-en-scène of this first film and Minnelli’s subsequent work reveals just how cinematic he could make theater once he found his groove.

The cautiousness of the film’s proscenium-lined image carries over into the ostensible boldness of the film’s all-black casting. At first, Cabin in the Sky seems as if it might buck the limiting roles afforded to African-American performers in old Hollywood film. Kenneth Spencer ushers in the film on the sonorous notes of his mellifluous bass-baritone, lending his Rev. Green a sense of dignity and self-confidence miles removed from the slack-jawed obsequiousness typically reserved for the voice of black characters in a studio system that made no attempt to rock the boat of segregation.

But when Spencer’s good-natured preacher heads to the home of one of his flock’s missing sheep, Little Joe (Eddie Anderson), he inadvertently reintroduces all of the momentarily suspended stereotypes. Anderson parlayed prejudicial visions of lazy, dimwitted loutishness into satiric gold as the valet Rochester on Jack Benny’s radio program, but to see a variation of that act here, removed from white players off of whom the actor could bounce subtle jabs at those types, merely reinforces what Anderson was otherwise critiquing. Anderson’s raspy drawl gives Joe a blend of world-weariness and childish ignorance, a fitting but limiting voice for an inveterate gambler who lacks agency even in his quest to right his corrupted soul. Two sets of diametrically opposed figures determine his position on a Manichean moral spectrum, one being the two women who tempt him to either side: his wife, the spiritual and goodly Petunia (Ethel Waters), and the sultry temptress Georgia Brown (Lena Horne), a force of such salacious lust that even agents of Satan identify her as one of their own. 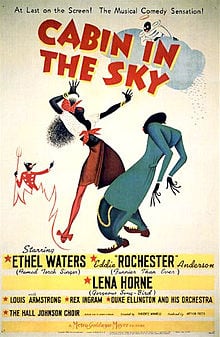 Joe comes into contact with those devils, as well as some angels, when a slip back into old ways briefly separates his soul from his mortal body to find soldiers of God (led by an angelic general also played by Spencer) sparring with “Lucifer Jr.,” (Rex Ingram) and a band of demonic cohorts . A Faustian wager between the two sides for the prize of Joe’s soul ensues, with the fool given six months to clean up his act, tempted all the while by the guiding voices of light and darkness. Naturally, the spiritual forces work primarily through the women in Joe’s life to act out their tug-of-war, with the angels looking to Petunia’s goodness to inspire Joe while Lucifer Jr. draws Georgia Brown back into the man’s life.

The equation of Waters’ lilting voice and constant prayer with purity and Horne’s seductive beauty with sin simplifies an already basic rendition of a familiar plot, but the centering of the never-ending conflict between Heaven and Hell on an unimpressive rube like Joe allows for a number of broad and subtle comic touches. Much of the humor comes from the thin barrier between mortal beings and the unseen but vaguely understood spiritual forces around them; Joe’s moral oscillations thus take on a near-screwball energy as his internal reflection is externalized by servants of God and Satan screaming at him to do what benefits their side. There are even nods to topical matters: Lucifer Jr. references the war when he hits a block thinking of new ways to tempt Joe, lamenting that all of Hell’s sharpest idea men are busy in Europe. The eventual plan, to make Joe rich to seal his fate, manages to play to both Christ’s teachings and lingering class resentments of the Depression.

Nevertheless, the clever writing falters when it comes to the songs, which putter about with simple lyrics and plodding tempos that weigh down the occasionally bawdy comedy with religious cleanliness that creeps even into the blocking and movement of the frame. Waters’ centerpiece, the Oscar-nominated “Happiness Is a Thing Called Joe,” trudges along with basic paeans to her idiotic man, but the sluggish reorientation of the camera feels like Minnelli’s camera is circling the edge of a stage, unable to move too far lest it fall into the orchestra pit. And when it comes time to finally get down to some sinnin’ in the form of a trip to a nearby nightclub hosting Duke Ellington, Minnelli turns over control to Busby Berkeley to handle one of the only thrilling moments of the entire film. Only the club’s subsequent destruction at the behest of the Lord, which sends debris falling to the ground to radically alter the composition of each shot every few seconds, hints at the total control of mise-en-scène Minnelli would later effortlessly command.

Uninspiring as much of it may be, however, Cabin in the Sky is often entertaining, with a script that distracts from its broader reductiveness with wit and affable performances from all. It also provides a few glimpses of its director’s skills: the play of light and shadows is as blatant and unsubtle as the film’s moral divisions, but it allows Minnelli and cinematographer Sidney Wagner to set up some clever compositions that move between the two planes of the afterlife. As Joe lays on his seeming deathbed near the top of the film, the whole room wallows in darkness, but Petunia enters in a ray of light that is then focused upon her face when she bends the knee in prayer. Best of all is an early scene in a church, where a crane shot moves as if along a typewriter as it follows the process of gossip down each pew and then to the next row back, the whispers roping a thread through the hymns being sung. In a film that so insistently portrays good Christian living as the model for a moral life, this mingling churches’ dual role as a place of religious expression and of communal smack-talking makes a joke about hypocrisy and judgment that only works because of the shot’s movement and intimacy. Whether Minnelli intended the dig or not, his camera already displays a capacity for stretching past the limitations of the director’s material, one that would soon announce him as one of Hollywood’s greatest stylists.