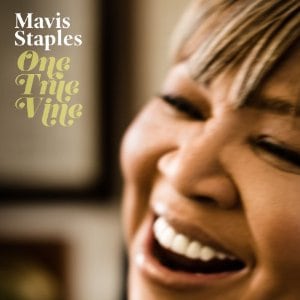 [xrr rating=4.0/5]The career of Mavis Staples needs no introduction, though is worthy of one out of sheer reverence. From fronting the Staple Singers to a multi-decade string of soulful solo releases, it could be argued that few individuals can be as credited with bringing spiritual songs to the masses as Staples. Since the 1950s she’s been shaping the music of everyone from her dad to Bob Dylan, filtering gospel, folk and soul through a non-secular voice bluesier than some of her more well-known female R&B counterparts. Sure, there have been some misses along the way (name a veteran artist that didn’t have at least one while active during the ‘80s or the disco era), but it was always a result of misdirection or poor choice, never performance.

There’s no such problem under the tutelage of Jeff Tweedy. Staples has found an unlikely kindred partner in Tweedy, who has his hands all over his second consecutive outing as her producer. From writing a handful of the songs to handpicking tracks from Wilco’s extended family to tackling just about all the instrumentation (along with son Spencer on drums), his stamp is a little more pronounced here than it was on 2010’s excellent You Are Not Alone. That’s not to say this is the Jeff Tweedy show. These songs would fall flat in less capable hands, and Staples delivers full force, flexing her timbre through the omnipresent theme of escaping a rough place for a better one. This is subject matter she knows well, likely because she’s been singing about it since before Tweedy was born.

The difference here is You Are Not Alone seemed a return to form for Staples, more career retrospective than evolution, while One True Vine stylistically follows the pattern of its predecessor’s title track and makes a huge forward leap. Hushed and subdued, Staples exhibits unprecedented restraint that displays her true range, proving she doesn’t need a groove to power through. These aren’t first round knockouts, her voice slowly pummels you until you’re weak in the knees, and you’ll feel every punch. Nowhere is this more evident than the gorgeous standout title track, one Tweedy had lying around from Wilco’s Sky Blue Sky sessions. Staples wears “One True Vine” like a glove, injecting warmth and feeling its author never could. She really locks in on Tweedy’s tracks, gracefully maneuvering the folky “Jesus Wept” at a decibel Lambchop would approve, and getting ferocious on the swampy guitar stomp of “Every Step.”

Tweedy’s biggest accomplishment, however, might be realizing how Staples could uncover the common thread between new and old, religious and secular. On “Holy Ghost,” she discovers the reverence in Low’s slow burn, perhaps imagining the freakish strength of her voice after 60 years as she sings, “Some holy ghost keeps me hangin’ on.” A spot-on interpretation of Funkadelic’s stoner classic “Can You Get to That” nods back to “I’ll Take You There,” while she finds untapped jubilation in Nick Lowe’s “Far Celestial Shore,” making it truly believable when she sings, “There’s a place I know for certain I will someday see.” Tweedy knows Staples’ wheelhouse is rooted in gospel, and he really tees her up with traditional songs like the country blues of “Sow Good Seeds” and the century-old “What Are They Doing in Heaven Today,” featuring a 12-string humming almost like a funeral bagpipe.

Two records in, it’s clear Tweedy has breathed life into Mavis Staples, and she must know it. Though including the Staple Singers’ “I Like the Things About Me” could come across as nostalgic, it’s not delivered that way and neither is the song’s message. With Tweedy tightening up the original and updating it as if Wilco played ‘70s soul-funk, Staples sums up One True Vine with a single line: “I looked in the mirror and what did I see/ A brand new image of the same old me.” That mirror isn’t lying – she gives us plenty to like, too.