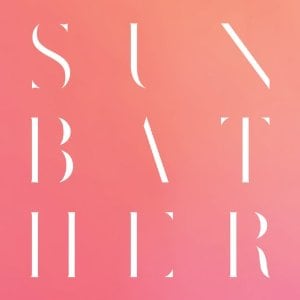 [xrr rating=4.25/5]Take one glance at the album art for Deafheaven’s Sunbather, and you’d think they were a summer of 2009 chillwave act with a 2013 taste in typography and graphic design. Take one glance at the album’s song titles, from “Dream House” to “The Pecan Tree,” and you’d be convinced that they’re yet another Laurel Canyon sound retread. Take one listen to Sunbather, and you’re not proven entirely wrong. Yes, you’re mostly wrong, but Deafheaven are from San Francisco, and more importantly, they have found a way to make black metal shoegaze for the summer, their wintry cool somehow sounding just as appropriate for lying in the park outside as for sulking in a small dive bar in which everybody’s wearing the same black leather jacket. Deafheaven’s combination of black metal and shoegaze on Sunbather is a unique statement, but more importantly, it’s uplifting, emotional and melodic.

On “Dream House,” instant cacophony becomes beautiful and epic. It’s not that the obliterating drums and guitars cease or subside; over the course of “Dream House,” Deafheaven genre hops from in-your-face black metal to post-rock ambient music not far removed from Explosions In the Sky. “Dream House” eventually segues into the comparatively quiet, piano-laden and appropriately-titled “Irresistible.” But unlike the softer songs on most metal albums, songs that often function as therapy and refuge after assault, “Irresistible” is a challenging composition in and of itself, as awe-inspiring and attractive as its predecessor.

Overall, Sunbather is both diverse within and among the many genres it displays. In other words, not only does the album feature black metal, shoegaze, post-rock and avant-garde ambient noise, but its many black metal songs are all unique. Here again is where Deafheaven separate themselves from their contemporaries: while many technically proficient and dexterous metal bands fall victim to indistinguishable individual tracks, Deafheaven explore the terrain of every genre they feature. Sunbather’s title track, like “Dream House,” is undeniably black metal with bits of shoegaze, but it starts with slower, but more upbeat post-rock drums as opposed to all-out massacre; it’s like the more muscular twin of the Civil War beat of Bon Iver’s “Perth.”

Meanwhile, the ambient spoken word of “Please Remember” may clash aesthetically with the rest of Sunbather, but it fits thematically because as a whole, this record is a confident statement of genre about insecure people. It’s riddled with nihilistic lines about how death and ignorance might be more blissful and dreamy than life itself. While on most of Sunbather, you can understand the content of the screams of ice cold lead singer George Clarke about as well as those of a wildcat, Deafheaven show the ability to conjure feelings beyond instrumental wails and vocal cues.

From the sheer beauty of “Irresistible” and “Dream House” to the brutal guitar soloing of “Vertigo” and “The Pecan Tree,” Deafheaven assert their instrumental prowess on Sunbather. Lead guitarist Kerry McCoy and drummer Daniel Tracy amaze and provide a warm complement to Clarke’s freezing breaths. But more importantly, Sunbather sees Deafheaven finding a way to make a personal, emotional statement without resorting to pure aggression and instead by finding places for insecurity within confidence, for instrumental complexity within the relentlessly heavy, and for the grey areas within black metal.