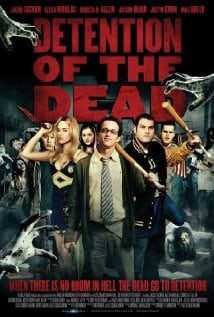 [xrr rating=1.0/5]With World War Z in theaters, the zombie craze in pop culture may have finally reached critical mass. Though movies about zombies have been kicking around since 1932’s White Zombie, the genre really hit its stride with the 1968 release of Night of the Living Dead. In the decades since, every possible permutation of films filled with the walking dead has been made. Scary zombie movies, funny zombie movies, science fiction zombie movies, fantasy zombie movies, even romantic comedy zombie movies. “Zombie movies” are as much of a cliché as zombies themselves, to the point that it seems commonplace for a character confronted with the threat of flesh-eating corpses to be aware of the tropes of such films. Detention of the Dead fits neatly into the overloaded genre of self-aware zombie movies, hoping that a high school twist on a subject matter beaten into the ground (as it were) is enough to give it some vitality.

In short, it’s not. Detention of the Dead is a thoroughly unnecessary entry in the genre, evidencing not even a single original thought as it shambles on for an excessive 87 minutes. Based on the play of the same name by Rob Rinow and helmed by first-time director Alex Craig Mann, the film is entirely dependent on viewers recognizing horror staple references and enjoying heavy-handed satire for any entertainment value whatsoever. Presented as a cross between The Breakfast Club and Shaun of the Dead (which, to be fair, is neither a better nor worse idea for a zombie movie), the movie throws six high school stereotypes in the middle of a zombie epidemic and then layers on the schlock. While the characters do indeed have names lifted from {The Rocky Horror Picture Show}, “Buffy the Vampire Slayer” and {The Evil Dead}, there’s no actual character development that justifies them being billed as anything but the Nerd (Jacob Zachar}, the Goth (Alexa Nikolas), the Cheerleader (Christa B. Allen), the Burnout (Justin Chon), the Jock (Jayson Blair) and the Other Jock (Max Adler).

One can describe the plot of the film as such: stock characters are thrown into a generic zombie scenario, there is one John Hughes-esque scene of them bonding, most of them die and then some military forces show up to bail out the survivors. Going into more detail than that wouldn’t so much be a spoiler as a waste of time; there’s no plot machination that isn’t predictable and the jokes, such as they can be said to exist, are so labored as to be funny more for the sake of someone actually daring to say them than for actual humorous content.

While {Detention of the Dead} utterly fails as a movie, it’s actually quite easy to see how it would succeed as a stage play. While Mann shoots the movie competently (if unremarkably), much of the dialogue and action seems far more suited to live theater in which the audience can interact with the intentionally stupid jokes; while terrible humor can be passed off as winking parody to an audience present and able to applaud and/or groan, it loses a great deal in the translation to the screen. {Detention of the Dead} often reaches for the same level of homage as {Shaun of the Dead} (the library in which the kids hide out is named Savini Library, for example, and a zombie rat is probably a nod to {Braindead}), but never gets close. If anything, it’s a close cousin to {Psycho Beach Party}, another movie that mashes ironic humor and horror. But if you’re into that film, rent it or watch a few Annette Funicello movies. You’ll do better to watch almost anything but {Detention of the Dead}.