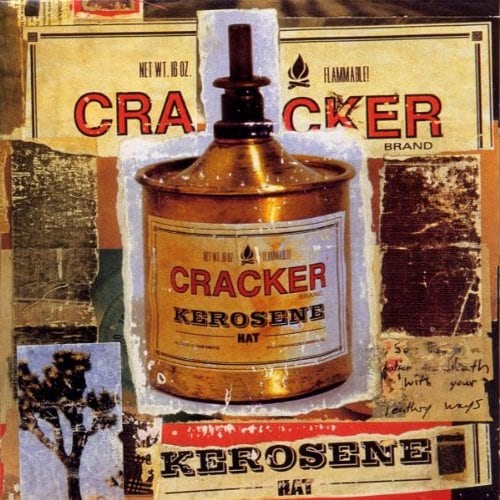 In mid-1993, the tidal wave of grunge was still rolling across the musical landscape, washing aside everything in its path—but other musical eddies were swirling in side pockets of the rock radio current. Noisy bands like Helmet and Ministry were pushing the limits of aggression, riot grrrls like L7 and Bikini Kill were poised to make a splash, shoegazers Mazzy Star murmured softly into their mics and, on the horizon, Britpop acts Oasis and Blur were waiting to undermine grunge’s moody gloom with old-fashioned rock ‘n’ roll swagger. Among all this simmering musical stew, for a few months at least, a little band out of Virginia was poised to release the signature tune of summer 1993.

David Lowery, frontman for college-radio sweethearts Camper Van Beethoven, had formed Cracker as a solo project and, in 1992, released the band’s debut album. Lowery’s reedy voice and ironic sensibilites were all over the record in such songs as “Can I Take My Gun to Heaven” and “Don’t Fuck Me Up (with Peace and Love),” but it was lead track “Teen Angst” that encapsulated the band’s off-kilter humor with lyrics like: “What the world needs now is another folk singer / like I need a hole in my head.” Solid as the album was—and it was solid—it never gained much traction outside of college radio. Cracker’s follow-up offering, 1993’s Kerosene Hat, was another story.

Powered by the discordant leadoff track “Low,” Kerosene Hat was everywhere in the summer of 1993. Or maybe it’s better to say that “Low” was everywhere. Rock radio had the song on heavy rotation and the band played the tune on Conan O’Brien’s “Late Night.” I remember watching David Letterman one night and hearing Paul Shaffer and the band launch into the distinctive opening as the show faded to commercial. The body of the song itself is a simple four-chord progression, mixed with moody lyrics and a heartfelt chorus. What makes the song stand out is that discordant intro (which shows up again during the verses) and lyrics that are uncharacteristically somber.

Terrific as that song is, though, it’s not the only gem on the album. I remember the summer of 1993 quite well: the woman I was to marry the following year had returned to her home overseas, for a period of six weeks, and I was both restless and lonely. Everything reminded me of her. The plaintive strains of “I Want Everything” perfectly matched my own heartfelt—and tremendously sincere—longing for my own absent sweetheart. “Let’s Go for a Ride” is a balls-out rocker that made me want to hurtle down the highway with her sitting beside me in a convertible that I didn’t own; “Take Me Down to the Infirmary” indulged my penchant for melodrama with its maudlin tune and wistful lyrics. Not until later did I realize just how perfect a song it is, a gentle blend of reverbed guitar strumming and chicken-scratch electric jams that sounds like the best Lou Reed song he never wrote.

“Get Off This” was the band’s second hit after “Low,” a bouncy pop number in the mold of, say, the Spin Doctors, but with the likeable Lowery elevating the tune above anything that band ever managed. “Sweet Potato” is a vintage piece of Cracker swamp-rock, with thickly distorted vocals and a muddy, murky guitar tone. Lowery spits out lyrics like Dylan in “Subterranean Homesick Blues,” but with a twinkle in his eye that prevents the listener from taking anything too seriously. The country-esque “Lonesome Johnny Blues” was never a favorite of mine, though it did presage the one alt-country tune that would find its way onto every Cracker album, until the band released a whole record of them, 2003’s Countrysides.

One notable way in which Kerosene Hat is a product of its time is its use of hidden tracks. Remember that old gimmick? Trust Lowery to take it to the extreme—the CD contains no fewer than 99 tracks, the first dozen of which comprise the record proper. After this follow dozens upon dozens of three-second blank tracks, 13 through 99, which probably seemed riotously funny to the engineers in the studio. (Stoned? You decide.) Happily, there are a couple of actual songs mixed in there, “I Ride My Bike” and “Euro-Trash Girl,” along with some other tidbits. “Euro-Trash Girl” is a standout tune, an eight-minute meander through the travails of an American student in Europe. Musically it’s simple three-chord guitar rock, a midtempo jam that’s pleasant enough but hardly groundbreaking; Lowery’s shaggy-dog-story lyrics are what elevate it.

One way or another, Kerosene Hat manages to consistently transcend the typical. When the music falters a little, Lowery’s nasal wit keeps the listener engaged, and when the lyrics run a little flat, the band picks up the slack. In the cases when both music and lyrics are on the mark—and there are many—the record achieves something close to greatness. Cracker would release other records that are just as good—1998’s Gentleman’s Blues is packed with terrific songs, and 1996’s The Golden Age is strong too, especially its slap-in-the-face opener “I Hate My Generation”—but none would capture the public’s ear as well as Kerosene Hat. The band has held on over the years, periodically releasing albums, but its glory days are well behind them. No matter. The band will always have the summer of 1993, and the summer of 1993 will always have “Low.”