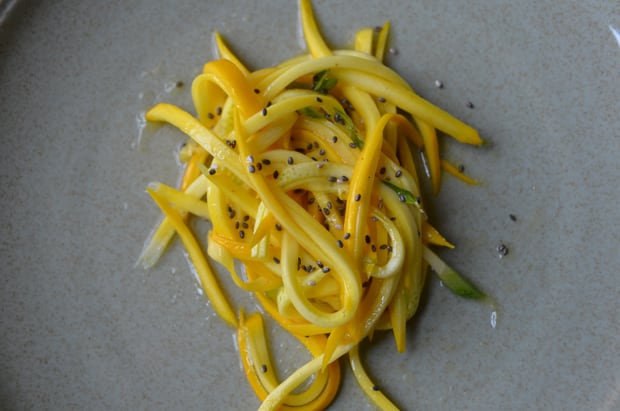 If the phrase “Let’s slice it and throw it on the grill” sends a shudder down your spine whenever it’s associated with summer squash, then this one is for you. Not that grilling squash is inherently bad, or that it can’t be delicious in fact, but it seems to be the de rigueur technique for preparing it these days and in my mind it’s grown more than a little tiresome. It could be down to the fact that they arrive from the farm just as summer’s heat seems to set in for good and when the last thing on your mind is cooking anything in your already hot kitchen. Hence, the grill. Problem is, something has to tenderize the squash before it’s ready to eat and, in almost all cases heat is the tenderizer. Who wants to attempt that on a 90 degree day?

There is a way to do a cold preparation of squash that’s both satisfying and, well: heatless. Full disclosure, I poached the basic technique for this recipe from Michael Ruhlman’s excellent cooking blog. It’s expanded and altered a bit, but the basic concept of salting the squash ahead of time so it tenderizes it without having to heat it is right from his site. It’s a revelatory idea that maintains the freshness of the squash while developing a yielding texture and releasing a surprising amount of its liquid along the way. Over time, I’ve adapted Ruhlman’s technique, julienning the squash instead of slicing it lengthwise, cutting down the salt slightly and also the amount of time it takes to soften. Ingredients-wise, the lemons remain for their acidity. Honey and mint replace dill in the vinaigrette, the saltiness of the squash needing a sweet counterpoint from the honey and the mint because summer salads and mint just belong together. I’ve exchanged chia seeds for almonds here and while they admittedly don’t pack the flavor of the almonds they add a nice textural crunch.

Using a mandoline slicer, (or a sharp knife if you’re feeling adventurous) julienne the squash into long, 1/8 inch thick strips. This is infinitely easier if you have a mandoline that but it also can be very satisfying as a test of your knife skills if you go the other route. Toss the squash with the salt and let sit in a colander for 7 minutes, no more or they will become mushy and no less or they won’t tenderize. Combine the lemon juice, honey and mint in a large bowl and slowly whisk in the olive oil. Season the vinaigrette with salt and pepper and keep in mind that the squash are thoroughly salted already. Taste the squash, if it is too salty for your palate rinse quickly with cold water and pat dry. Toss the squash with the vinaigrette, top with a sprinkling of chia seeds and serve immediately. Serves 5-6