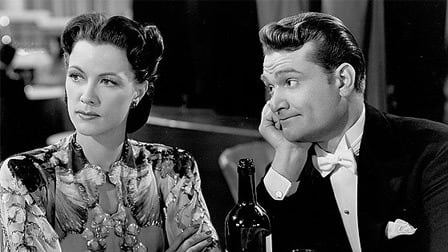 Released less than six months after Cabin in the Sky, I Dood It follows an uneven debut with a picture so listless it nearly qualifies as a sophomore slump. Once again, Vincente Minnelli finds himself working with theatrical material; in fact, where Cabin merely looked the part of a live show, I Dood It essentially is one. The film concerns a tailor so average his name is Joe (Red Skelton) who falls madly in love with Broadway star Constance Shaw (Eleanor Powell). The stage is where Joe goes to see Constance, and when the diva impulsively marries her fan to get back at her philandering co-star/fiancé (Richard Ainley), she sets in motion a farce that will eventually be resolved on the stage.

Stylistically, I Dood It opens up somewhat from Cabin as it moves from stripped-down, rustic trappings to the bustle of behind-the-scenes pandemonium and ritzy galas. Generally speaking, however, it feels even less cinematic than its predecessor, its centerpieces demonstrations of clever stagecraft over filmic movement and its static long takes a vehicle for converting any interior into a flat surface in front of which Skelton can do vaudeville. Even the more impressive visual flourishes, like a jazz number about Jericho that climaxes with a gigantic projected shadow of a trumpeter player blowing the walls down, seem more like an official taping of a Broadway production than a burst of inspiration. 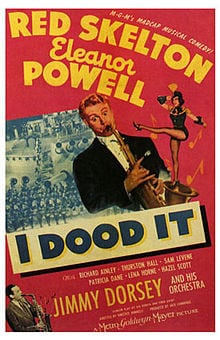 I Dood It rapidly outpaces its thin material. Adapted, sometimes shot for shot, from Buster Keaton’s final silent, Spite Marriage, the film adds 25 minutes to Keaton’s 80, despite cutting some of the wandering the protagonist gets up to after being rejected by his reluctant bride. That leaves excessive longueurs that even Skelton’s considerable comic talent cannot fill, leaving him to mug at every possible moment to try and keep the audience entertained. Even the film’s one exciting setpiece, a direct lift from Spite Marriage of the newlywed husband desperately attempting to put his unconscious wife to bed, takes a great premise (and an impressively limber Powell) and drags on interminably until its punchline works only to let us know the bit is finally over. Only one thing in this movie happens fast, and that is the blinding, confounding speed with which a saboteur plot is introduced out of nowhere to tie the feature to wartime relevance. In that sequence, Joe’s bewilderment that someone wants to bomb an ammunition store located next to the theater may be a proxy for the audience’s own confusion.

In Minnelli’s defense, this gig was thrown unceremoniously at his feet after the project’s original director, Roy Del Ruth, was fired. He recalled the project with no fondness, but the director did contend that it showed his ability to make poor, incoherent material work. That may be a step too far: even at the height of his powers, Minnelli would have been a terrible fit for a Keaton knock-off. Keaton’s comedies, like those of any great silent comic, display formal innovation that nevertheless brings all attention back to the human element at their center. Keaton’s rickety houses, runaway trains and self-reflexive inter-film movement all stem from the root that is his body, with its acrobatic technicality and its perfect emotional control. But the people in Minnelli’s films tend to grow out of their surroundings, with actors left to be a part of the mise-en-scène until they can claw out some identity and individuality from the frame around them. In the director’s first two films, only Lena Horne accomplishes this, though in this film her scenes come so far from left field (as to be seamlessly excisable at theater owners’ discretion) that she cannot anchor the picture. Only with Minnelli’s film, which pushes his theatrical production design to the next level, does a lead emerge capable of filling and dominating the space. The results would make this look like the work of someone else altogether.