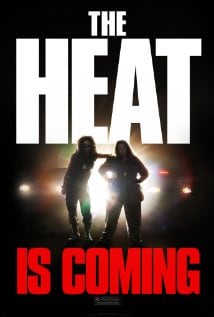 [xrr rating=3.0/5]With Bridesmaids, director Paul Feig proved that a gross-out comedy featuring women could be just as successful and, well, gross as the ones starring and targeting males. Just think about Maya Rudolph squatting to shit in the street in a wedding dress while the rest of her bridal party vomits away nearby, or Kristen Wiig having horrible sex with a sleazy Jon Hamm in the film’s opening scenes. I really hate to make this review about gender comparisons, but Feig’s latest vehicle, The Heat, is a funny, but self-conscious take on the buddy-cop comedy but featuring two women, instead of men.

Continuing in the tradition of Beverly Hills Cop, 48 Hrs, and Hot Fuzz, The Heat pairs Sandra Bullock and Melissa McCarthy together as a straight-laced FBI agent and a foul-mouthed, slovenly cop tracking to crack a Boston murder case. You can guess who plays who. Written by Katie Dippold, The Heat is a sometimes hilarious film that still follows the clichés set in place by its forbears. Bullock’s Ashburn, a New York City federal agent with a near perfect track record and a penchant for alienating her colleagues, comes to Boston expecting an open and closed case but soon realizes that she must rely on McCarthy’s reactionary Mullins, a brash local cop who isn’t adverse to throwing a watermelon at an escaping perp, to navigate through the local drug dealers and prostitutes before she can land the big fish, a shadowy figure named Larkin who is slicing up those who get in his way.

But to return to gender issues – is seeing two ladies fill out the roles normally inhabited by men enough to make The Heat a totally fresh take on the genre? The film really tries hard to make us believe it is being revolutionary with jokes about lacking balls, male cops being pussies and even culminating with Bullock shooting some guy directly in the dick. It wouldn’t even be a topic of discussion if the film itself didn’t continue to hammer home its intent, telegraphing it like a slogan: “Hey, ladies don’t usually do this sort of thing. Aren’t we clever?” For the most part, The Heat proves you don’t need Kurt Russell and Sylvester Stallone to make a buddy cop movie, but it often feels insecure, underestimating that an audience is ready for a female cop film that is not fetishized or reductionist in its politics.

The real prize here is McCarthy, who turns in another winning performance for Feig. While the trifecta of Bridesmaids, Identity Thief and now The Heat threatens to typecast McCarthy in the roles that beleaguered Chris Farley and John Candy, she is simply hilarious here as the hard-nosed local cop who comes from a family that makes Mark Wahlberg’s clan in The Fighter seem like the Waltons. Bullock, never the most gifted comedic actress, does well as the uptight Ashburn, but her performance is definitely eclipsed by McCarthy’s brio.

While successful in eliciting laughs and featuring charming performances from Bullock and McCarthy, The Heat still falls in line with the tropes that made this genre fizzle out years before. For example, while Hot Fuzz featured some funny performances from Simon Pegg and Nick Frost, it lacked the freshness that made Shaun of the Dead so much fun. So rather than transcend the source material here, The Heat pads out worn clichés with funny one-liners and gross-out gags.