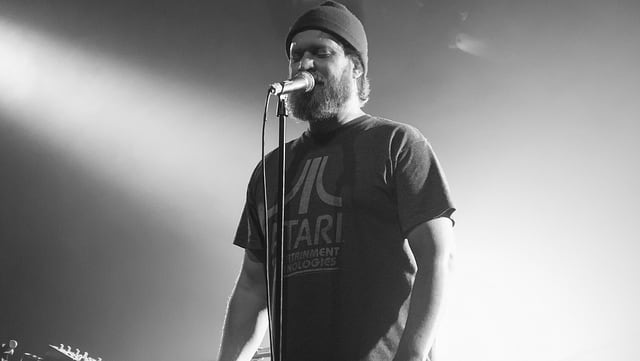 John Grant’s sophomore album Pale Green Ghosts stands in stark contrast with prior record Queen of Denmark, replacing the debut’s torch songs with twitchy compositions that lace his erudite songwriting skills with an icy electro that recalls the sharp turn Madonna took when she worked with William Orbit. In concert, the sweet and the chilly threads came together to present a compelling portrait of a seriously underrated musician.

In front of a small, but appreciative Portland crowd, the ex-Czars singer turned in a two hour performance that was bracing, exciting, acerbic, buoyant and warm. Flanked by an Icelandic/British band, Grant’s songs sounded impeccable in Portland’s darling venue Doug Fir Lounge, one that the singer confessed is one of his favorite rooms to play.

Kicking off the show with new song “You Don’t Have To,” Grant played the most emotional show I’ve seen since Antony and the Johnsons came through the region behind The Crying Light. Grant is a warts-and-all lyricist (as seen on “Glacier” and “It Doesn’t Matter) and while his songs speak volumes, the singer took time between songs to address issues such as homophobia and the recent news that he had contracted HIV.

Splitting the night behind the keyboard and standing center stage behind a microphone, Grant cuts an imposing figure on stage. Wearing a black T-shirt and sporting a shaggy beard, Grant’s implacable demeanor began to melt away as the show wore on, even making jokes about ABBA and calling one bandmate a “crafty cunt” for jokingly leaving the echo effect on his keyboard. New songs such as “GMF” (aka Greatest Motherfucker) show humor and wit, something that came out after spending two hours with Grant.

Grant is also a cinephile, two elements that are apparent in his songs. Sigourney Weaver, Ernest Borgnine and Woody Allen all make appearances in his music and while talking about his battle with HIV, Grant relayed a tale about waiting on Borgnine once in New York City. Of course, the notoriously homophobic actor makes a strange subject for a song about contracting HIV, but in another wry touch Grant includes him a song where he asks the actor for advice about his illness. However, Grant said that Borgnine’s best advice would likely be, “Stop being a faggot.”

While most of the night focused on Grant’s solo work, a few Czars songs snuck into the setlist such as “Drug” and “Paint the Moon,” much to the delight of longtime fans in the audience. Much of Grant’s slower songs gradually began to appear towards the end of the set such as “Where Dreams Go to Die” and “Caramel.” It was a great comedown for an evening fraught with fun and sentiment, the band never overstaying its ample and generous set time.

To call Grant’s concert a tour de force may be unwarranted hyperbole, but I continued to think about the show days later. Many concerts are fun trifles that burn brightly for a few hours and then diminish into the mind. Grant’s show lingered, toyed with me and made me yearn to see him play again. That really doesn’t happen very often.