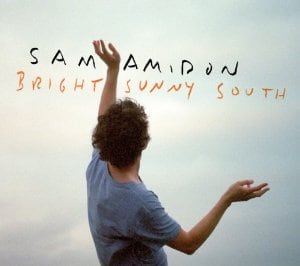 For example, Bright Sunny South’s title track is narrated by a soldier leaving home to go back to war. But instead of concentrating on the complexity of the song’s emotions in inventive, new ways, Amidon writes about self-involved expressions of anger. When he sings, “The dangers of war I intend for to share/ And for sickness and death I intend to prepare,” he comes across as sarcastic rather than genuine and honored, lamenting having to go off to a war in which he doesn’t want to fight. Meanwhile, “I Wish I Wish” is a one-note somber fest until Amidon throws some avant-garde trumpet in there. On Bright Sunny South, Amidon doesn’t carry a song by himself, by the strength of his baritone and obtuse lyrics. Instead, he relies too heavily on the band surrounding him. “Short Life”’s Appalachian strings, which switch from disorienting to sentimental, dominate the track and render Amidon’s voice and lyrics a background feature. Without the context of Amidon’s previous work, many songs on Bright Sunny South are solid instrumental experiments. Taking into account what Amidon has previously released, however, you’re inevitably less impressed with what he now has to offer.

Indeed, Amidon’s pop covers are the best tracks on Bright Sunny South. His cover of Tim McGraw’s “My Old Friend” keeps the backbone of the original while offering some beautiful falsetto and shimmery acoustic guitar. And, even if he wasn’t trying to be funny, Amidon’s cover of Mariah Carey’s “Shake It Off” works on a Shatner-like humorous level, Amidon keeping Carey’s Calgon commercial references and playing the piano as slowly as a sullen Thom Yorke to great comedic effect. After the general quality of the covers on Bright Sunny South and, for that matter, on I See the Sign (the latter of which contained no original tracks), one wonders if Amidon is best served covering country standards and reinterpreting the Top 40.

And yet, Bright Sunny South finds Amidon with more freedom to actually create rather than room to reinterpret. He’s an expert interpreter, but as a creator, he’s rough around the edges. Hopefully Bright Sunny South is an unexpected, but rare misstep in an otherwise strong career.

[xrr rating=4.25/5]Take one glance at the album art for Deafheaven’s Sunbather, and you’d …