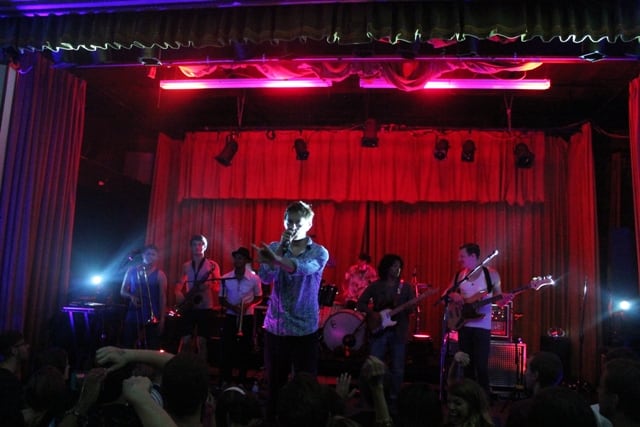 “The last time we played Cleveland, back in 2007 I believe, we played that little back room to about six people,” Yeasayer frontman Chris Keating quipped with his Cleveland fanbase. “We went out, and when we came back everybody was gone. We almost wanted to quit that night… Cleveland almost killed us. But it’s okay, we weren’t very good back then!” Taking to the intimate institution on a Wednesday night, Keating and his collective of avant-pop songsmiths might have initially feared a similarly light turnout, but with the Fourth of July (and a four-day weekend) following the performance, they were welcomed with a rather boisterous packed house.

Having had the opportunity to explore the psychedelic-pop stylings of Yeasayer at both Ultra Music Festival and Electric Forest during the early months of 2013, the band is best appreciated in a club setting with friends that know the four-piece outside of their “Ambling Alp” success – which Yeasayer reserved for the final moments of their set as a massive ballroom sing-along. Even after years on the road, Keating still maintains an odd onstage persona. Strutting across the stage with hand on hip, much like a young Steven Tyler, Keating often looks through an audience as if channeling the visceral energy that originally went into creating the compositions.

During the broken ambience and chopped Caribbean-vibes of “Demon Road,” Keating would do quick laps across the stage between his synth set-up and microphone but never truly make eye contact with those across the room – as if doing so would destroy the connection he had with the song’s subject. Keating saved the interaction for appropriate breaks, or when he would have to apologize for accidently dropping his mic stand (which he deemed the worst in the world) onto the front row. Keating also put on a much appreciated lecture about the sound arrangement of Beachland Ballroom, which leaves the front two rows of standing revelers actually behind the PA system. Keating thanked them for standing so close, but asked if they might actually want to move in order to hear the show better.

Although Keating controlled most of the dialogue with the audience, the brilliant Beachland Ballroom limelight was shared equally with both guitarist Anand Wilder and bassist Ira Wolf Tuton. The first of the show’s sing-alongs was reserved for the Wilder-sang track “Madder Red” and Keating pumped the crowd in preparation for the newest of Wilder-front fan-favorites “Devil and the Deed” off of 2012’s Fragrant World LP. As a thank you to opening band Reptar, Keating and company asked for the collective’s horn section to join them onstage to work through the aforementioned “Ambling Alp.” The final time Yeasayer would be joined on their current tour by Reptar, Keating said that they had all become fast friends but asking for the entire 8-piece group to hop on stage would have been impossibility on such a small piece of real estate.

Already an aural psychedelic endeavor, the work of Yeasayer was amplified with a superb light arrangement. Normally not the most multi-sensory of venues (often the lighting can be quite minimal), the Beachland Ballroom raised their game as well to guarantee that Yeasayer will never again be playing to a house of six. Just following 11:30, the display of vibrant hues shifted into sights of aerial explosives as the crowd exited into the celebrity streets of Cleveland’s early Fourth of July celebrations.