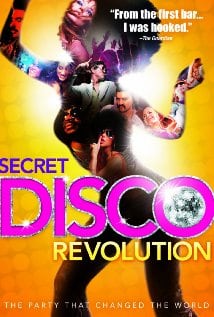 [xrr rating=2.0/5]Love it or hate it, the disco era is one of the defining moments of 20th century culture, its music and fashion sense inspiring reactions for and against its aural and rhythmic pleasures. Jamie Kastner’s documentary The Secret Disco Revolution addresses some of the conflicting opinions around this music: liberating or limiting? Innovative or mechanical? Protest or apolitical? The answer is both, depending whom you ask. Kastner assembles many of the movers and hip-shakers of the 1970s scene, though he doesn’t hit all the marks—why not interview Nile Rodgers or Giorgio Moroder, both of whom are referenced in the film and have been open to press? Historical gaps can be glossed over, but the director’s worst sins are of commission.

The film’s font and title design lovingly recreates 1970s graphics, but Kastner often treats his material, and sometimes his interview subjects, with a knowing contempt. This begins with the film’s framing device, involving three silver-lame clad “masterminds of disco” who watch over the cultural landscape. The director imagines that these powerful beings, who seem to have walked out of a 1970s porno, conspired to guide a nation’s musical and cultural elite into doing their glittery 4/4 bidding. If that isn’t coy enough, a tongue-in-cheek narration essentially puts everything in the film between ironic quotes. Thus, record producers, disco divas and scholars alike are treated as kooks.

Kastner tells interviewers that he chuckled when he first read about a possible political subtext in disco. Author Alice Echols, whose book Hot Stuff: Disco and the Remaking of American Culture proposes this subtext, appears at regular intervals in Kastner’s film, but if he has come around to her theories, he does not do them any favors. Echols’ clipped voice makes her come across as an academic who can’t get down. When Echols’ offers her critique of Saturday Night Fever as a feminist, anti-racist film, Kastner edits in clips from the film that practically mock her assertions. Too bad. Some of the ideas are ridiculous; others provocative, and ultimately the talking heads to a man dismiss the director’s arguments. A thoughtful cultural dialogue comes through despite the director’s stylistic tics.

Political claims made for disco run along three lines. First, that it was a liberating music for blacks, gays and women. Echols offers Donna Summer’s “Love to Love You Baby” as an example of the last, its 20-minute extended mix of Summer’s audible moaning a “feminist indictment of the three-minute orgasm.” But the music wasn’t so liberating for the women who sang it. Thelma Houston and Maxine Nightingale were both frustrated by the kind of material they were forced to sing, and Evelyn “Champagne” King laments that her sole hit, “Shame,” has become a burden to her, a kind of sequined albatross. Karsten probably thought it would be funny to edit King’s complaints about performing “Shame” repeatedly into a series of inarticulate repetitions, but he should be ashamed.

This antagonism between director and subjects goes both ways, and comes to a head in a contentious interview with surviving members of the Village People. Their very body language screams, “Who is this idiot asking us questions?” Karsten begins his interview by asking about the Village People’s status as gay icons, and when they begged to differ and distance themselves from the scene, the director loses focus and never recovers. The best documentaries approach their subject with a mind open to wherever its subject may take them. Karsten cherry-picks evidence to fit his thesis, then treats the whole thing as a joke anyway. Disco deserves better.