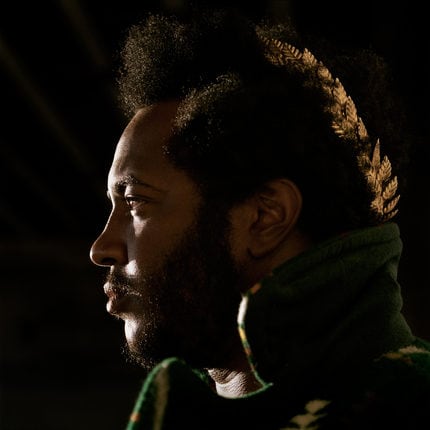 [xrr rating=3.75/5]About midway through Apocalypse, singer/songwriter/bassist Stephen Bruner’s second LP as Thundercat, comes “Oh Sheit It’s X,” a disco tune that could win the award for “sickest party anthem of the summer.” It would not be that out of place on the new Daft Punk record alongside “Get Lucky” and “Lose Yourself to Dance.” A high-pitched synth hook and funky bass line anchor Bruner’s catchy pop melody as he sings, “I just wanna party/ You should be in here/ In this ecstasy.” This seemingly simplistic lyric encapsulates why there is so much to love about Apocalypse. Thundercat has thrown a wicked party, and he wants to invite as many people as possible.

Bruner is an accomplished musician, a virtuosic bassist whose chops are on par with Stanley Clarke, Victor Wooten, Marcus Miller and other modern-day wunderkinds of the low end. Unlike some technically advanced instrumentalists, Bruner’s mad skills on his ax aren’t his only selling point. He is equally adept at crafting singable, danceable songs with lyrics that cut right to the heart of life’s most pressing concerns. With Los Angeles-based Brainfeeder label-mate Flying Lotus, Thundercat has crafted a planet of sounds on which elements of soul, EDM, jazz, prog-rock and psychedelia comingle effortlessly. The two have previously worked together on Thundercat’s debut LP The Golden Age of Apocalypse and Flying Lotus’ 2010 record Cosmogramma. Apocalypse is the pinnacle of their collaboration.

Thundercat plays plenty of complex, speedy bass lines, but they are often placed amongst a smorgasbord of sounds, merely one layer in a sea of sonic delights. Bruner and FlyLo give us shaky synths on “Tenfold,” underwater keyboards accompanied by fluttering noises on “The Life Aquatic,” a theremin simulator on “Special Stage” and a trembling vocal filter reminiscent of Neil Young’s “Will to Love” on “Evangelion.” Somehow, Thundercat makes jazz-inflected bass lines fit against these assorted trippy sounds. On “Heartbreaks + Setbacks” and “Tenfold,” the flood of bass doesn’t really kick in until the end, a mere “sprinkle” on the cake rather than an ingredient in the batter.

The best tunes on Apocalypse feature the warmest, most carefully constructed melodies. “Without You” contains a set of complicated, meandering chord changes, yet the melody remains identifiable throughout. “Lotus and the Jondy” showcases acoustic drums, bass and synth all soloing simultaneously in its second half, while the first half grounds this collective improvisation with a buoyant tune. The only songs on Apocalypse that don’t resonate as deeply are those that lack strong melodic development (“The Life Aquatic”) or are dedicated too strongly to a simple concept (“Tron Song,” which is apparently about Bruner’s cat).

The joy inherent in the creativity and playfulness of the music is reinforced in the mostly upbeat, optimistic lyrics. Although Bruner deals with intense loss in the aftermath of his friend and collaborator Austin Peralta’s untimely death, he always finds the silver lining to every disablement. On the dolefully titled “Heartbreaks + Setbacks,” Bruner states, “This could be the chance for us to see/ Maybe we’ll figure out where we’re supposed to be.” “If you lose you have to play again,” he reassures us on “Special Stage.” The sky’s the limits in this thing called life, our lyricist asserts. “Can you hear the sound of infinity?” he asks on “Seven,” accompanied by handclaps and an enthralling odd time signature.

Thundercat ends the record with one of the most ambitious, fully realized tracks on the album, an elegy for his late friend. “A Message for Austin/Praise the Lord/Enter the Void,” which has a two-movement structure, starts with an angular string melody. Thundercat’s bass, and eventually an acoustic piano, echo this tune, producing an orchestral effect. The second “movement” features the otherworldly sound of chimes and Latin percussion before slowly fading away. Bruner’s sonic celebration of his late friend’s life, and the bulk of this exhilarating LP for that matter, serves as a musical representation of his assertion that, “Heaven and Earth are one in the same.”