Throughout cinematic history, there are a few great examples of hubris, of projects that collapsed under the weight of their stars (whether they were actors or directors, or even producers, in the rare case of Robert Evans) and the stresses of grand filmmaking. Heaven’s Gate (1980) is a famous example, legendarily branded as the end of the New Hollywood generation’s glory run. More recently, After Earth (2012) is another, the first true flop in the career of one of film’s most resilient stars, Will Smith, and a notable bit of backlash against his growing dynasty. Kevin Costner’s Waterworld stands as one of the most notorious of these films, a movie that stopped one of Hollywood’s biggest stars dead in his tracks just a few years after a slew of massive successes, including Academy Award wins for Best Director and Best Picture.

While Waterworld is a flawed movie, it’s nowhere near the disastrous joke that its reputation suggests. On a list of all the terrible science fiction films made, Waterworld wouldn’t even make it into the worst 25. In many ways, it’s a film of tremendous ambition and huge ideas, so much that the movie can’t possibly support them all. While it may be overblown at times, and poorly acted at others, it does take a certain brilliance to come up with a premise so far off from the perfunctory “desert world” locale that has dominated the post-apocalypse genre. More than that, it’s a film that commits to its ideas and builds a fascinating world, one full of striking images and a sense of desolation.

A bit of trivia that often pops up around Waterworld is that if the polar icecaps did melt entirely, the water level would not rise to anything like the apocalyptic, society-drowning levels seen in the film. Frankly, that’s a bit of a silly nitpick. It makes no more sense than wondering where all the sand on Tatooine comes from or why the phasers on the USS Enterprise make sounds when they shoot. If you buy into its premise, the film will reward you. When it comes to the world it presents, Waterworld is almost unnervingly realistic, positing a world in which dirt is a tradable commodity, urine reclamation is a viable, disgusting process and entire new religions have been built around the scraps of past civilization that have survived. Whatever faults the film may have, it creates a clear world with its own fully-realized customs, history and societies. Even more than that, the people behind the film were clearly adherents of George Lucas’s “used future” theory of science fiction, in which everything looks battered and barely functioning. It’s a world that’s been on the brink of collapse for years, and that desperation sinks into the storytelling. 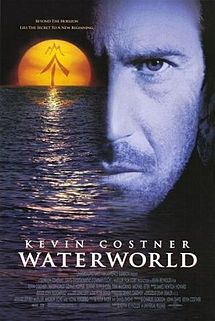 That’s another aspect of Waterworld that sets it apart from your average blockbuster science fiction flick: its relentless fatalism. The world presented in the film is not a nice place. It’s hard to survive and easy to get killed; nothing about the ocean environment of the planet is hospitable to humans; even more dangerous than the ocean are the other surviving humans. Every character’s sole priority is simply staying alive for as long as possible, yet it’s clear that every step they take is merely a stop-gap. In the case of the Mariner (Costner) and the adoptive family that accumulates around him (Jeanne Tripplehorn and Tina Majorino), that step is the idea of a semi-mythical Dryland that will provide some shelter for them. In the case of the Deacon (Dennis Hopper) and his pirate gang, the Smokers, it’s even more direct: their rusted tanker ship is running out of fuel and they’re coming up against a shortage of people to prey on. A wizened old man living in the gloomy world beneath the tanker’s deck sums it up perfectly when he reports that the ship’s oil level is lower than expected: everyone is dying by inches.

The real problem with Waterworld is that none of the principal actors seem to be on the same page about what kind of movie they’re making. Costner plays against his affable Midwest image as a humorless mutant anti-hero more willing to kill for fresh water than show a human expression. Hopper, on the other hand, plays the Deacon as campy as possible, sometimes hewing closer to a Batman villain than the leader of a group of starving pirates. It’s a flaw that prevents the story from ever really gelling.

Still, this is one of the finest pieces of world-building in recent science fiction. In its best moments – when Costner’s ship drifts beneath a hugely swollen moon or when an unexpected confrontation with a sea drifter gone mad with loneliness and thirst creates a thrilling tension – Waterworld becomes a fine movie full of darkness and fatalism. It just has too many ideas to support them all.