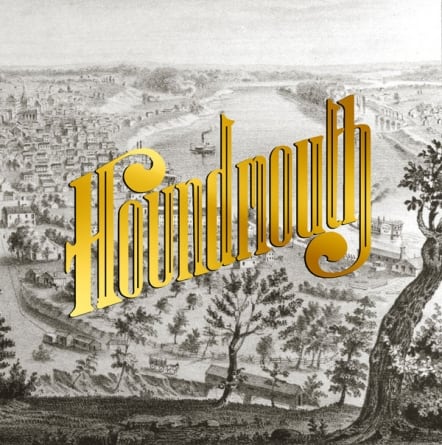 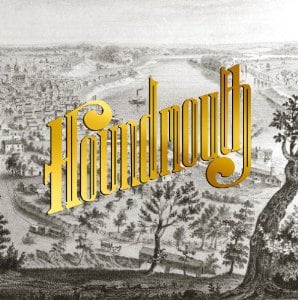 In this indie-folk era of mandolins, banjos, horns, obscure regional or tribal instruments and rampant use of the words “hey” and “ho,” sometimes a band that sticks to standard blues-rock instrumentation and straightforward songwriting can be unfairly derided as derivative. A year after Alabama Shakes (who have been accused of the same themselves) rekindled excitement for rootsy Americana and the Lumineers invaded Top 40 radio, southern Indiana’s Houndmouth emerges into a crowded market. So despite a generally positive reception thus far, sparked by an under-the-radar 2012 EP that led into their debut full-length, From the Hills Below the City ─ and a recent guest slot on “Conan” ─Houndmouth isn’t shattering any molds. But you don’t have to reinvent the wheel every time you want to go for a joyride.

When viewed in this light of realistic expectations, From the Hills is a shiny, full-throttled debut. The blend of male and female vocals, primarily from guitarist Matt Myers and keyboardist Katie Toupin (though all four members get some time behind a mic), is more organic and less cutesy than you’ll find on Of Monsters and Men, though also bursting with their own whiskey-breathed charm.

From the Hills opens with the trifecta of “On the Road,” “Come On, Illinois” and “Penitentiary.” Putting their best foot forward with “On the Road,” the record snaps to a rousing start as Myers and Toupin duet, “I’m going down/ Where nobody knows me,” conjuring up visions of Kerouac with both lyrics and the song’s title. The song’s jangly roots rock appeal is so addictive that even well-worn pet names like “sugar mama” and “boy in blue” somehow work. “Come On, Illinois” uses a slow, tinny guitar riff to stir up wistfulness before surging into a crashing crescendo. Meanwhile, the tempo of “Penitentiary” (which was featured on the band’s 2012 self-titled EP) is a kissing cousin of the Band’s “The Weight,” but the shuffling verses that lose themselves in grimy organ in the choruses forge their own identity.

Toupin takes lead vocals in a salty, sassy “Casino (Bad Things),” while bassist Zak Appleby’s lead in “Hey Rose” works less well, delving into more overt honky-tonk that shifts too country-western for the album’s folksy good. Despite not quite hitting the two-minute mark, “Krampus” is a tambourine-jangling stomp that breathes life into the (on-paper) cookie-cutter lyrics, “I see the light, shining on me/ I’m coming home, for the winter.” Toupin’s best turn behind the mic occurs on the slower, sweeter “Houston Train” while the crunchy guitar, sustained organ chords and raw-throated wails on penultimate track “Comin’ Round Again” rewards listeners who make it through to the end of this full-bodied record.

From the Hills is a no-nonsense album that transcends its various clichéd lyrics— about jailhouses, outhouses, cigarettes, slinging cocaine, whiskey and malt liquor, scraping together cash, hardscrabble waitresses, trains, borderlines, restlessness—primarily due to its earnestness and homage. Above all, Houndmouth is a band that colors within the lines but paints a pretty picture anyway. There’s something refreshing about that—whether or not it’s been done before, they’re playing the music they love, and they’re doing a damn fine job.