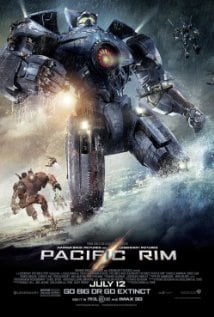 One can divide Guillermo del Toro’s movies into two categories: his thoughtful and creepy Spanish language films, such as The Devil’s Backbone and Pan’s Labyrinth, and his big, dumb English language blockbusters. Besides their spatterings of gore, never the two shall meet. Five years after Hellboy II: The Golden Army, del Toro returns with Pacific Rim, the biggest, and perhaps dumbest, film in his oeuvre.

The premise is simple: large reptilian creatures are rising from the Pacific Ocean, intent on destroying humanity. To fight back, humans have crafted gigantic robot suits equipped with missiles and lasers, strong enough to repel the scaly hordes. Yes, del Toro infuses Pacific Rim with a vivacious energy that is missing from other summer duds such as Man of Steel. But what Pacific Rim lacks is depth, the anti-San Andreas Fault of film. Instead, the mayhem here is akin to your five-year-old brother mashing together your vintage Voltron action figures with his rubber dinosaurs while taking a bath. For some people, that might be enough to justify a summer blockbuster.

As the monsters, called kaiju, enter through an intergalactic void at the bottom of the ocean, each one bigger and scarier than the last, it is up to a ragtag group of humans to pilot immense robot suits (known as Jaegers) and figure out a way to close the portal for good. The result is two movies happening at the same time: while the jocks and the gearheads work on bashing the beasties, two dorky scientists (Charlie Day and Burn Gorman) attempt to understand the kaiju. Unfortunately, del Toro’s more interested in the former, mechas smashing into lizard flesh, than in giving any of the characters more than a perfunctory dollop of development.

Each Jaeger is piloted by two humans, one to control each hemisphere, each connected sympathetically, in a dream state known as “The Drift.” Leading the charge is Stacker Pentecost (Idris Elba in high speechifying mode) who recruits a motley crew for the last stand, including the haunted Raleigh Becket (Charlie Hunnam), upstart Mako Mori (Rinko Kikuchi), an Australian father-son team and a handful of Russians and Chinese who do nothing at all but look stereotypically Russian and Chinese. It is clear that del Toro identifies much more with the scientists, giving them all the plumb lines and comic scenes. The rest of the characters are little more than cyphers, one-dimensional tropes who exist to pad out the non-fighting scenes.

Although it may appear like one on the surface, Pacific Rim is nothing at all analogous to a Michael Bay movie. It doesn’t have that pumping male energy, that smarmy need to blow things up while stroking its penis and cackling out, “America, fuck yeah!” while smashing down the aliens. Del Toro tries to create a poignant story about Mako and the hesitancy of Stacker, who wants to prevent his adopted daughter from entering into battle. However, he doesn’t invest enough time in any of their connections, and ultimately he cannot convey any sense of loss, even when principal characters begin to die. Nothing here reaches the pathos of the scene where Ofelia bleeds out in Pan’s Labyrinth. Like all of del Toro’s English language films, Pacific Rim does nothing for the soul. This is a movie ready for a video game adaptation. The difference being that it is much, much easier care about the characters in the best video games than any human del Toro puts on the screen.