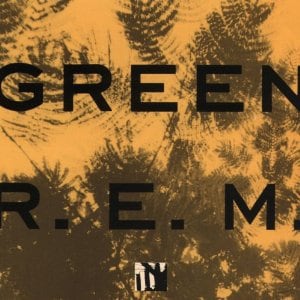 [xrr rating=4.25/5]There are two major demarcation points for R.E.M. fan – when the group left indie label I.R.S. Records following Document and the period following drummer Bill Berry’s departure in 1997. For many, the move to Warner Bros. signaled a sell-out, a shift to arena rock hinted at on Lifes Rich Pageant (1986) and somewhat fulfilled on I.R.S. swansong Document (1987), the group’s first album to sell one million copies. Given complete creative freedom (and a cool sum of money rumored to between $6 and $12 million), R.E.M. convened in Athens in early 1988 to write what would be their sixth album, Green.

Perhaps the biggest fear of R.E.M. fans was the group would whitewash the Southern weirdness that informed many of its best songs. Granted, the last track on Document, “Oddfellows Local 151” is one of the band’s strangest songs and if you judged Green based on its singles alone, you would likely agree that this fear had come to fruition. “Orange Crush,” “Stand,” “Pop Song 89” and “Get Up” are definitely among the most radio-oriented songs that the band ever produced, but take a closer look at the reminder of the record and you will see that R.E.M. actually used all that major label lucre to create a commercial album that still leaned on an indie rock aesthetic.

If anything, Green was the first R.E.M. record where the band explored beyond a traditional singer, guitar, bass and drum configuration. Peter Buck said in an interview that until Green, the R.E.M. template consisted of “minor-key, mid-tempo, enigmatic, semi-folk-rock-balladish things.” The magic was wearing off and it was time for a change. The band swapped instruments. On “You Are the Everything,” a hushed, minor-key ballad that dominates the first side of the record, Buck played mandolin, soon to become a mainstay in the defining sound of R.E.M., Berry strapped on the bass and Mike Mills pulled out the accordion.

“You Are the Everything” puts to rest all the misgivings of R.E.M. losing its religion. Beginning with the hum of crickets, the song evokes the warm hue of a Southern evening, setting the template for the songs that edged R.E.M. even further to stardom on Out of Time and culminated with the autumnal hush of Automatic for the People. This blissful track was Michael Stipe’s first blatant stab at a love song sans irony, and its evocative lyrics such as “And she is so beautiful/ She is so young and old/ I look at her and see the beauty of the light of music,” remain without parallel in the singer’s deep catalog.

“You Are the Everything” isn’t the only song that suggests that backyard-in-the-evening aesthetic of R.E.M. songs past. “The Wrong Child” is a swooning, off-kilter song about alienation and “Hairshirt” predicts future Automatic favorites such as “Find the River.” The untitled final track, which features Stipe and Mills in angelic, exhausted harmony, is a gorgeous finisher with Buck on drums and Berry on guitar, a shambolic finale to an album that feels more a summation of disparate elements than a cohesive entity.

Perhaps the most disorienting thing about Green was the appearance of pop songs such as “Stand,” “Get Up” and the aptly named “Pop Song 89.” Anomalies such as “Can’t Get There From Here” had popped up on R.E.M. albums prior, but they were most often buried deep in the tracklist. Here, the album kicks off with “Pop Song,” which is actually a deceptive commentary on the power of popular music. As Stipe asks, “Should we talk about the weather?/ Should we talk about the government?” he isn’t merely referencing the Doors but probing the power of popular music. Should a pop song really dictate politics and public opinion? Stipe would direct the song’s music video where he and three women dance topless. When MTV asked him to censor the women, he covered himself up as well.

If anything, the infectious “Stand” in all its catchiness brought new fans to R.E.M., but this type of throwaway track was a dead end that the band eventually abandoned following the execrable “Shiny Happy People.” According to Stipe, the song evolved from the band’s love of ‘60s groups such as the Monkees. “They threw these super bubblegummy songs at me, and I said, ‘I’ll raise you and see you one,’” he said of his bandmates. “And I wrote the most inane lyrics that I could possibly write. Now, it was a very intentional thing to do that.” The song would go on to top the US Billboard Modern Rock and Mainstream Rock charts, hitting #6 on the Hot 100 chart.

Green also saw R.E.M. flexing its political muscle and the band chose to release the album on Election Day 1988, working to support Democratic candidate Michael Dukakis in his battle against George H. W. Bush. Although the band had always written political songs, especially on prior effort Document, it took a different tack on Green, moving away from the darkness that clouds the previous effort and infusing their politics with irony.

But the record does feature a pair of heavy-hitters, “Orange Crush” and “Turn You Inside-Out,” that rock as hard as anything on Document. Featuring blistering guitars by Buck, “Orange Crush” compares the chemical agent used in Vietnam with the current political climate in the States following eight years under Ronald Reagan. It is total chaos with the sounds of helicopters, marching phalanxes of soldiers and Stipe bleating into a megaphone, reminiscent of the police state rampant on the second record of The Wall. In their live incarnations, both “Orange Crush” and “Turn You Inside-Out” grew louder and angrier as Stipe shouted into his megaphone.

After the dust has settled on Green as it reaches its 25th year, it is a disparate album where its many great parts don’t necessarily add up to a cohesive whole. While the hush of “You Are the Everything” would later be eclipsed by “Losing My Religion” and most of Automatic for the People, two songs stand out as the most distinctive tracks. Political, yet lacking the fiery polemic of “Orange Crush,” “World Leader Pretend” featured Bucky Baxter on pedal steel and Jane Scarpantoni on cello, a chamber pop masterpiece tied together with one of Stipe’s most mature lyrics to date, especially the mournful, “You fill the mortar/ You fill in the harmony/ You fill in the mortar/ I raised the wall/ And I’m the only one/ I will be the one to knock it down.” Written about the isolating effect of political power, “World Leader Pretend” is more defeated sigh than angry reckoning. It’s no wonder it is the first song where R.E.M. printed its lyrics on the album sleeve. The other standout is “I Remember California,” as dark and mystifying as anything on the second side of Document. As Stipe free associates fragments such as “lemons,” “motor boys” and “redwood trees,” Buck’s soaring guitar threatens to push us off the edge of the continent, herding us past the Continental Divide and into the Pacific Ocean. It’s gloomy and full of trepidation, the sound of creatures jumping the barricades and heading towards the sea. Only the buoyant final, untitled track saves us from certain disaster, cushioning us in that honeyed harmony and world weary affect that would return soon on “Near Wild Heaven” and “Texarkana.”

Green was not the polarizing nightmare so many R.E.M. fans feared. If anything, it was a junction where the band reached back into the elements that made it so successful and began to stitch together a road map for the future. Following a giant world tour, the group would take the first of a series of long breaks, creating time and space between R.E.M. releases which had been appearing annually since 1983. In just a few years, R.E.M. would shrug off the cult band status and become an international powerhouse akin to U2 and Depeche Mode. Green helped R.E.M. on its way to evolving into the biggest band in the world, but it’s a progression that feels natural with no traces of selling out or compromise.