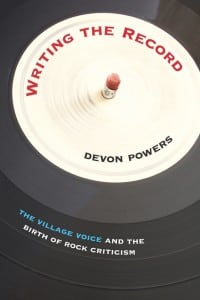 [xrr rating=3.75/5]Given the excess of opinions available at the click of a mouse in today’s blogosphere, it would seem to go without saying that popular music is a valid subject for analysis. There was a time, however, when rock ‘n’ roll was thought to be unworthy of cultural criticism, a vulgar youth trifle that didn’t warrant a second thought. In Writing the Record, Drexel University professor Devon Powers offers an explanation of how popular music was elevated to the level of books, visual art and “legitimate” forms of music like opera and the symphony. She contends that two men, Richard Goldstein and Robert Christgau, were largely responsible for doing the “elevating,” becoming “public intellectuals” and “knowledge producers” who happened to write about rock while working at one of America’s most forward-looking publications, The Village Voice, in the late 1960s.

Powers sets the scene by taking us inside the creation of The Voice in 1955. The publication became a sort of “imagined community” for bohemia on a global level, not just a neighborhood newspaper. Its open-ended editorial policy and the freedom it granted to writers allowed for a focus on individual expression and formal innovation that was somewhat unprecedented in American journalism. The publication’s music coverage was spotty at first. Writers started discussing the so-called “folk scare” that descended upon the Village, but did so in a way that focused more on public controversy (such as the community battles over Sunday public hootenannies) than artistic quality or social significance.

Goldstein’s “Pop Eye” column changed all of this. Taking a cue from the principles of New Journalism, he covered popular culture, and rock music in particular, as part of the culture itself, not just an innocent observer. Whereas early media coverage of rock ‘n’ roll focused on how the music contributed to “juvenile delinquency, teen violence, and sexual promiscuity,” young people now had an intelligent, influential advocate, a peer who loved and understood the music and its surrounding culture as much as they did. Film critic Pauline Kael was an influence on Goldstein’s philosophy, with her readable, at times colloquial prose style. Goldstein often cursed, invented new words and embraced stream-of-consciousness technique.

As Goldstein’s column continued, he became increasingly concerned about the “infiltration of base commercialism” into his beloved music. Rock criticism was “mainstreamed” and became “an established business that intertwined with the industry it covered.” So-called “hippies” became a marketable demographic, one that made record executives sit up and take notice. The result was that hype, “the antithesis of authenticity,” took a central role in the promotion, consumption and discussion of popular music. “Company freaks,” hip, young music fans, were hired by record companies to persuade critics to positively review the company’s records.

Goldstein’s bullshit detector lit up as these changes occurred, and he wrote about mainstream pop music with a larger degree of cautious pessimism, preferring to focus on underground genres and movements, such as the bourgeoning San Francisco psychedelic scene. Even the underground was subject to commercial exploitation, though. As Goldstein said, “No sooner does a new tribe of rebels slip out, flip out, trip out, and take its stand than photographers from Life magazine are on the scene doing a cover layout.” Authenticity, the biggest standard for judging rock music, had become yet another promotional tool.

Christgau, who started writing his “Rock & Roll” column for The Village Voice in 1969, took a different approach to the hype machine and the rock market’s increasing segmentation. His Consumer Guide “evolved music criticism into service journalism.” Like Kael before him, Christgau always placed himself inside his stories. Rather than bemoan the commercialization and exploitation of popular music, he simply threw his hands in the air, confessing that there were not enough hours in the day to listen to everything the record companies were throwing at him. He acknowledged time and time again that he was not an “average consumer.” As a critic, he was given the rare opportunity to hear basically everything that was released in a given year … for free. “I really am a dupe of the record industry. I grow fond of so many of the records they lay on me that I forget despite myself that you poor people have to buy the fuckers,” he said in one column. By embracing honesty and transparency, Christgau reclaimed some of the authenticity that Goldstein feared was lost in the capitalist marketplace of music consumption.

Powers tells quite a tale, and it is worth reading for anyone interested in the interaction of pop culture, music, journalism and commerce. Her book is a revised dissertation, which is not surprising given its academic tone and diction. Some of her background on the idea of “pop” and the history of rock ‘n’ roll as an art form could be more concise so more space could be dedicated to analyzing excerpts from Christgau’s and Goldstein’s writing, the real subject of the book. Her exploration of race identity in the new rock criticism, while an important discussion, feels a bit out of place in the trajectory of her overall argument. Nevertheless, the issues that music writers of the late ‘60s brought to the fore have never been fully resolved. How authenticity can be perused in an era of hype, market segmentation and exploitation is still an open question. The fact that these concerns aren’t new is simultaneously comforting and depressing.