It’s 1996 and Los Angeles is a hellhole of the first order, alight like a perpetually-burning tire fire but with half the whimsy. Supercop John Spartan (Sylvester Stallone) and professional psychopath Simon Phoenix (Wesley Snipes) are in a standoff in an abandoned warehouse, but Spartan botches the operation and dozens of hostages are killed. Both Spartan and Phoenix are sentenced to lengthy prison terms of rehabilitation while in cryostasis. In 2032, after Los Angeles has become part of the greater San Angeles metroplex and crime has all but disappeared, Phoenix escapes and wreaks havoc on an unprepared city. At the suggestion of plucky policewoman Lenina Huxley (Sandra Bullock), John Spartan is thawed out and paroled in hopes he can capture Phoenix. The two proceed to destroy a host of cars, buildings and corporate lawn sculptures while trading one-liners and navigating a strange new society where everything fun has been outlawed, for the good of the people.

On the surface, the world of San Angeles looks like a liberal hippie commune gone wrong, a nanny state of the type certain political groups warn us about regularly. The movie makes plenty of fun of the well-meaning blandness of the populace, all dull smiles and empty wishes. It soon becomes clear, however, that this liberal Utopia is in reality a construct of a corporatocracy controlled by a single private citizen more interested in power than the populace. Dr. Cocteau (Nigel Hawthorne) is the leader of this new society, but he is very noticeably not a government official. The government seems entirely absent in Demolition Man, its functions now managed by corporations or simply eliminated altogether.

It’s a scattershot sociopolitical satire, one that skewers both the political left and right, as well as anarchists, libertarians and more. The sociopolitical mockery of Demolition Man never lands on any one belief long enough to do it harm. This is in part because the political content is mere metaphor for the true philosophical focus of the film: the deconstruction of the Hollywood action blockbuster.

As Demolition Man opens, the iconic Hollywood sign is in flames. Within moments, the film’s hero is praised for his willful destruction of property and infrastructure in the name of his own version of justice. Dubbed by the media as the “Demolition Man,” Spartan’s not-so-subtle figurative purpose is to demolish society so it can be built anew. Where it goes wrong, of course, is when his destruction harms the very society he purports to save. In his absence, a different kind of destruction occurs in the form of an earthquake, after the recovery from which comes a rules-heavy dystopia passed off as a paradise. Big Brother is watching, but the end result, in the movie’s view, is surprisingly banal. There are no black helicopters disappearing problem people, no reprogramming centers or food rationing, only non-contact sex and electronic scolds when profanity is uttered. Big Brother is apparently the MPAA.

Demolition Man received heavy criticism on its release for blatantly repurposing tropes and plot points from a host of other films. Wesley Snipes, a fine action star who never quite got his due as well as a man brave enough to pair a kicky pair of Zubaz with a brown leather belt, plays Phoenix as The Joker without the interesting facial issues, and his is not the only character right out of a comic book. Further, visuals from Alien and Blade Runner are deployed, various well-worn sci-fi and action flick clichés are used and plot points from a half dozen big-budget films from the decade previous are borrowed. 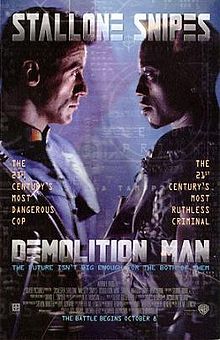 But Demolition Man doesn’t try to hide this; it’s a movie created by filmmakers who knew that the cookie-cutter plots of the action genre had become as dull and lifeless as the salt-free, low cholesterol world of San Angeles. Demolition Man takes all these old tropes off the shelf, one at a time, makes a mild joke about them to cut the tension, and then shows them off from different angles, making sure you see them, really see them, perhaps for the first time. This is a movie that does not want you to mindlessly consume a series of action movie clichés, and to that end, it slightly skews its stereotypes, adding something unexpected or removing something integral to make sure attention is paid.

A quip about Rambo made by Simon Phoenix as he browses through the weaponry section of the local museum is easy to take as a self-referential in-joke, but it is also an explicit reference to a cinematic history that leads from ultra violent 1980s blockbusters directly to Demolition Man. That well-armed mannequin displayed reverently in the city’s Hall of Violence is forever trapped in a glass-coffined past, just like Stallone’s frozen John Spartan had been for decades; both Stallone and that ersatz Rambo are reminders of a cultural legacy the city of San Angeles — and, metaphorically, the Hollywood industry — wants to forget.

Not that they want to forget because of shame or a sudden interest in high art and good taste; they want to forget because there is no profit left in it. The San Angeles citizenry may not realize this as they go about their days in tiny cars and get feel-good pep talks in kiosks that must surely be called reverse suicide booths, but Dr. Cocteau, architect of their toothless culture, knows it all too well. He, like Hollywood, is more than happy to dredge up the past, but only if it can be manipulated into a vehicle that ultimately gives him more money and greater power.

Though most of Demolition Man’s standard sci-fi predictions of the future are hilariously off the mark, the film’s criticism of a Hollywood no longer willing to leave room for innovation in their A-list action films proved to be more prescient than anyone could have imagined. Nothing illustrates this better than the actual resurrection of Rambo 12 years after Demolition Man: a character once sensibly left to languish in the Reagan era was dragged out and dusted off 20 years into the future by filmmakers who had burlap sacks stamped with dollar signs where their brains should have been. It’s the same corporate mentality threaded through the world of Demolition Man, the one that passed off commercial jingles as real music and allowed all restaurants to be taken over by one fast food conglomerate.

Demolition Man is a fine action piece, with the requisite violence and one-liners, solid characterizations and a well-crafted fictional world. That’s not to say it doesn’t falter at times, with dialogue that doesn’t ring true or the occasional stereotype left entirely unexamined. Especially egregious is the casting of Denis Leary as the motor-mouthed leader of an underground resistance. A man who made a career out of being the Bill Hicks for people too delicate to handle scary thoughts is pretty hard to stomach as an anarchist. But none of these things take away from the real strength of Demolition Man: satire that works as both entertaining action comedy and pointed criticism of the movie industry.