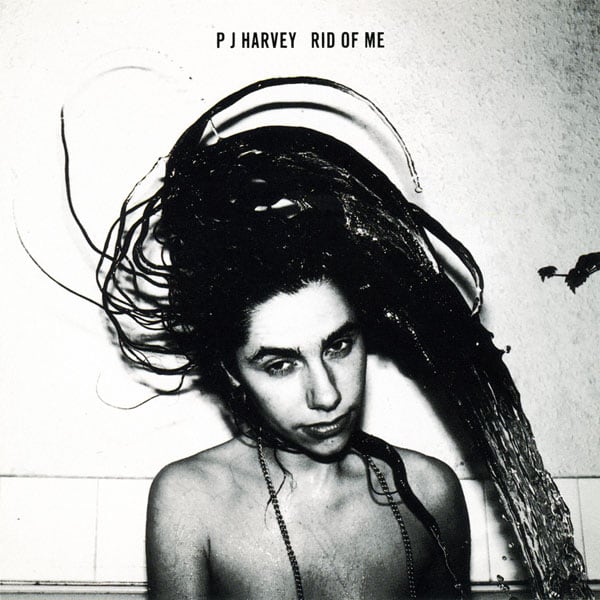 The mid ‘90s had no shortage of female singer-songwriters staking their place on the musical landscape. You had folky feminists, punk riot grrrls and confessional ingénues. But the one hardest to pigeonhole, and the one who arguably most successfully maintained her artistic integrity and relevance, was PJ Harvey. Across her 10 albums, she has sidestepped into discrete styles and tackled genres across the musical spectrum, yet the petite English songstress’s first declaration that she was an artist apart from the rest and had the legs to endure beyond the scene at the time, was 1993’s Rid of Me, her sophomore LP.

While Harvey was intimidating on debut Dry, she evolved to scare the outright shit out of you on Rid of Me. This element of terror is not some put-on either, some ersatz pretense of the shock-rocker type. No, Harvey need not don any garish costumes or horror-movie makeup to proclaim how scary she is. She goes the opposite way here, stripping down her persona and her instrumentation to its nadir, zeroing in on her characters’ ids and conjuring them forth against their will.

At the time of Rid of Me’s recording, the PJ Harvey moniker didn’t strictly refer to the woman, but her band entirely, completed by bassist Steven Vaughn and drummer-backing vocalist Rob Ellis. With Harvey’s distortion-laden guitar in the mix, the album almost entirely consisted of these basic instruments, the only additions being screeching violins and seasick cellos on three cuts and organ on another. Reduced to these bare essential instruments, Rid of Me stands as an experiment in guttural rock primitivism, producer Steven Albini crafting a deeply unsettling atmosphere on the record. Making the drums as clamorous and Harvey’s guitar as jagged and frenetic as possible, Albini causes the record to sound as though it were recorded in a four-walled cinderblock cell. It’s hard to define, but something about the harsh tonalities and pitches can leave the listener nauseated, or with a headache throbbing around the eyes and temples. The further into the record you go, the more your skin crawls, piqued by some indefinable unease inherent to the production, bolstered by the off-kilter time signatures and the content of the songs, most of which are character studies into grotesque protagonists depraved, distraught and psychotic.

The album opens on a most deceptive note, and one of the finest misdirections in rock history, with the title track’s quiet rhythmic strumming and distant-sounding drum tapping. Like the heartbeat of one lying in bed with paranoia and revenge beside them, the strumming slowly builds as Harvey’s voice enters, softly singing, “Tie yourself to me/ No one else/ No, you’re not rid of me.” So delicate does it sound the listener has to turn up the volume on the stereo while Harvey, overcome with palpable desperation, pledges to tie the object of her (des)ire’s legs, force him to lick her injuries and threaten to tear his head off. And just then, at the 2:10 mark, the tension snaps, the track explodes and a cacophony erupts with Harvey repeating in a bellow, “Don’t you wish you never/ Never met her?” in defiance and rage. It’s a line borrowed from Captain Beefheart’s “Dirty Blue Gene,” an influence Harvey would regularly appropriate across her oeuvre. In a sense, Rid of Me’s sonic textures are indebted to the Captain’s work, being a brutal continuation of his deconstruction of blues-rock. Back to the song itself, though, in a display of contradicting conventions, its Ellis’ crazed a capella vocals that end the piece with the refrain, “Lick my legs/ I’m on fire/ Lick my legs/ Of desire.”

Throughout the album, Harvey fully occupies her narrators’ states of mind, her passion conveyed in raw feeling to the listener; she is not merely a storyteller, but an actress in her encapsulation of these characters’ flaws and motivations. The exploration of these damaged characters continues with “Missed,” reportedly told from the perspective of the Virgin Mary as she reflects on Jesus’ crucifixion. The sorrow of a mother watching her son executed and then learning his grave is empty is a difficult feeling to capture, but Harvey handles it masterfully. Her secret for being so adroit at these personifications is her voice, pushed more as an instrument here than on Dry. At times, she sings with smoothly and evocatively; at others, she is all snarling howl, cavernous bellow and demented falsetto. More often than not, Harvey acts like a wolf whose leg is snared in a trap — caught in a vulnerable predicament, but lashing out violently should anyone approach to help. With “Legs,” a dirge broken up by scattershot drums and feedback squalls, Harvey’s voice runs the gamut as her narrator grapples with homicidal, delusional obsession. Violin and cello distortion fills the void as the character literally considers amputating her lover’s legs to keep him close to her, Harvey uttering a blood-curdling moan at the 2:11 mark that says more about desperation than any words could.

Though Harvey has denied the album as being aligned with feminism, there are confrontational elements along gender lines on many of Rid of Me’s songs. “Rub ‘Til It Bleeds” gets swampy and sweaty in a Pixies quiet-loud-quiet dynamic as Harvey states she’ll deface herself to prove how much weaker her antagonist is. The punk charge of “50 Ft. Queenie” is about as in your face an avowal of womanhood ever put to tape, Harvey shouting, “Tell you my name/ ‘F-U-C-K’/ 50 ft. queenie/ Force 10 hurricane/ Biggest woman/ I could have 10 sons.” “Man-Size” continues this attack, both songs using male-centric braggadocio bended into a female context. Then there is “Snake,” a retelling of the Genesis tale of original sin with sympathy shown to Eve, and “Me-Jane,” a take on the Tarzan story told from Jane’s perspective, wherein romance is nonexistent and a fed-up Jane acts like a hostage to the ape-man’s lusts, pleading him to “stop (his) fucking screaming.”

All this seriousness doesn’t mean there isn’t room for fun or dark humor. “Yuri-G” is a loving ode to the moon itself, the protagonist wishing she was cosmonaut Yuri Gagarin just to be closer to Luna. Then there is the cover of Bob Dylan’s “Highway 61 Revisited,” recasting the surreal imagery in an anarchistic light. And with “Man-Size Sextet,” Harvey’s own song is restructured around a string section, sounding like the soundtrack to a scene of danger in an old Disney animated movie.

Two decades on, Rid of Me remains PJ Harvey’s watershed moment, as abrasive and confrontational as it was in 1993. It’s not her best record, but it was the one that announced to the world that she was a force to be reckoned with, a legacy artist who would do what she wanted to do, how she wanted to do it.