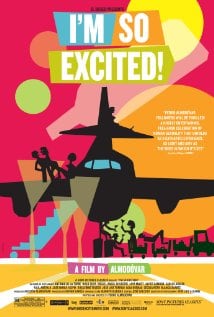 [xrr rating=3.5/5]Pedro Almodóvar rose up during la movida madrileña, a short period between the death of dictator Francisco Franco in 1975 and the appearance of AIDS where Spain experienced a cultural awakening as the shackles of fascism sloughed away, allowing the Spanish to finally experiment with sex and drugs. While Almodóvar has evolved into a “serious” filmmaker with each new release akin to an event, his first films spoke to the zeitgeist of la movida madrileña, lighthearted sexual romps such as Pepi, Luci, Bom and Labyrinth of Passion, both of which pushed the staid boundaries of Spanish film.

With I’m So Excited, Almodóvar steps away from recent serious fare, such as Broken Embraces and The Skin I Live In, and returns to the blithe themes of his first movies. Turning his back on the high-minded, self-reflexivity of his later films, Almodóvar turns in an immaculate little gem about a group of passengers who freak out and get off (in the sexual sense) as their airplane circles over Europe with technical difficulties.

With the flight, scheduled to fly from Madrid to Mexico City, now flying circles over Europe, Almodóvar turns his camera to a group of people in business class, the pilots and a trio of gay flight attendants. But I’m So Excited is more than “Benny Hill” in the clouds. All of the passengers in economy class have been conked out by barbiturates administered by the flight attendants to reduce panic. Look closer and perhaps Peninsula Flight 2549 represents Spain, where the rich in business class make all the decisions while the hoi polloi sleep.

On many American discussion boards, I’m So Excited has received divisive reviews from audience members. One of the biggest points of contention is a scene where a virginal character rapes a sedated man in economy class. The argument is that if the genders were switched, the tone would no longer be comic. But here is the thing: Almodóvar has used rape as a comedic tool in many of his past films. Just a take a look at Kika where an escaped sex maniac breaks out of jail and rapes the protagonist while another bound woman watches. Almodóvar revels in busting taboos and rape could be the ultimate one. Within Almodóvar’s body of work, the scene in I’m So Excited has been earned, even if that distinction is a dubious one.

Despite some dead-end subplots and an economic message that gets lost in the shuffle, I’m So Excited is an interesting entry into Almodóvar’s body of work. By no means vital, this confection is a reset button, a slight breather where the director has come full circle and honors the farces that launched his career. For those expecting another Almodóvar masterpiece, I’m So Excited may disappoint, but for those willing to see something lighter but still loaded with the director’s unique sense of humor, this is one trip for which you will want to buy a ticket.