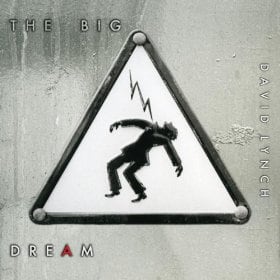 [xrr rating=3.5/5]You know those hallucinatory dreams you get when you’re sick, induced by equal parts fever and Nyquil? You’re wrapped in a cocoon of sheets, sweating in the sweltering humidity as horrid visions descend on you. Such an experience is the aural equivalent of David Lynch’s sophomore LP, The Big Dream. The surrealistic tones of his films saturate the piece (the title proclaiming the lynchpin influence of dreams, conversely making about as direct as Lynch has ever been), the intrigue and confounding elements served in equal measure.

Heavy on experimental soundscapes more than traditional songs, The Big Dream is the music that would ooze from a fissure in colliding dimensions. A noir mood is the order here, paranoia, lust and menace prevalent in each spooky cut. Frayed electric guitar and scratchy digital effects sound like the scurrying of a rat king serve as the bedrock, making an industrial blues concoction. Thick and swampy, The Big Dream is the soundtrack to a funhouse erected in the corrugated remains of a steel mill factory.

The opening title track sets the haunted house vibe. Skeletal drumming, synthetic brushes, fluttering keyboards and intermittent growling bass notes serve as the canvas, Lynch’s thin voice offering up reflections on love. It has that quality of driving at night through the seediest of urban underbellies, which offers a great transition to the next cut, “Star Dream Girl,” wherein Lynch acts like a third-shift radio DJ spinning a sordid yarn. “Them coming from all around/ Flying down that wide highway/ Coming like crowds/ Like never before/ Her being the one they can’t wait to see,” he says amid a Tom Waitsian juke joint stomp complete with clapping chain gang percussion. The deconstructed crooner “Last Call” dials it back down to a rat-a-tat beat and a bass line that flickers like a live wire, Lynch’s nasally warble sounding threatening even in what on paper is an endearing sentiment: “I miss you so much, baby/ I hope you come back real soon/ Real soon.”

“Cold Wind Blowin’” is one of the most somber cuts of the record, having the air of a ‘50s ballad as sung by a 21st century bluesman, Lynch’s phased voice backed by minimal instrumentation. As it progresses, it grows to have a degree of transcendence through the mud, or glitter in the gloom, and is rife with vivid imagery in such lines as “I see her smile on rainy days/ Spray-painted on clouds floating by.” Elsewhere, Lynch further shows off his diversity by dabbling with trance-evoking on the electronica swagger of “Wishin’ Well” and noise rock on “Sun Can’t Be Seen No More,” complete with Stooges-style saxophone blasts. On “I Want You,” it’s up to the listener if Lynch is being sexy or creepy, his cooing like poisoned syrup dripping from his mouth. At the end, closer “Are You Sure” has a spiritual feel, full of sad resignation and unfulfilled yearning in its drum machine patterns and drifting melody. Truly, the track is striking for how moving it is.

The lone cover of the album, Bob Dylan’s “The Ballad of Hollis Brown,” is a chillingly drastic reworking. While the original acoustic version carried with it the bitter cold of a windswept South Dakota landscape that could snap branches to splinters, in Lynch’s hands, it becomes a droning broodfest more evocative of a heat lightning-illuminated desert sprawl. With clanging drums and layers of distortion, the tension is almost overwhelming, the narrative of a down and out farmer killing himself and his own family in a perceived act of mercy becoming pure aural dread.

In the final analysis, The Big Dream is a captivating record, and impressive as an example of an artist associated with one medium stepping out to experiment with another. But is it going to appeal to those not gravitating to it from Lynch’s previous work? Not likely.