February 25, 2021
Home Books In Praise of Love: by Alain Badiou with Nicholas Truong 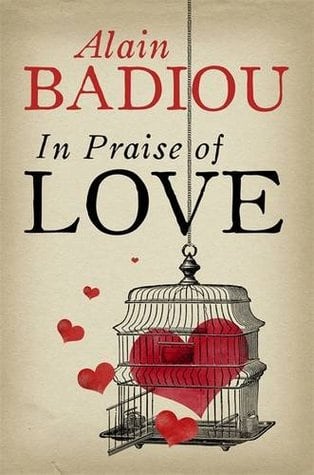 [xrr rating=3.5/5]Refining a live interview with French journalist Nicholas Truong into a mildly touched-up transcript, philosopher Alain Badiou’s In Praise of Love puts forward a case for the continued importance of love in a modern world, and the threats put upon it by various measures designed to make it easier in a fast-paced world. Barely has Badiou even begun to define love when he launches into a rant against Meetic, the popular European dating service whose touted ability to let strangers know everything about each other and choose compatibility before a meeting takes place strikes the philosopher as an affront to the very idea of love.

As Badiou lays out in the early portions of his chat with Truong, love relies on risk, the cautious willingness of both parties to expose themselves to someone different. That in and of itself is not a particularly bold observation, but Badiou constructs philosophical language on top of a layman argument. The risk, then, is not merely rewarding for its sense of the unknown but for the very difference between people, of learning to see things “from the point of view of two and not one.” Even the ethical philosophy of Emmanuel Levinas insufficiently accounts for this radical reorientation, in Badiou’s view: Levinas sees the Other as a means for discovering the Self, but Badiou conceives of love as a means of bridging Self and Other into a shared third perspective that sees the world in an entirely different way.

Levinas is but one of a number of philosophers invoked by Badiou, some mentioned more favorably than others. Naturally, the philosopher roots for his contentions in Plato, but Lacan offers an even stronger support for his talk of love. Clarifying Lacan’s notion of love as something that fills the emptiness of a physical relationship, Badiou explains that “While desire focuses on the other, always in a somewhat fetishist manner, on particular objects…love focuses on the very being of the other, on the other as it has erupted, fully armed with its being, into my life thus disrupted and re-fashioned.” Love, then, exists independently from its physical manifestations, be it the consummation of sex or the supposed fulfillment of childbirth. Badiou’s curt refusal to view a child as the final product of love but merely another event in a couple’s timeline may seem harsh, but doing so breaks love of its traditional “responsibilities” and argues that love is the same regardless of whether one has children or cannot have, or does not want, kids.

The positivity embedded in what initially seems an abstracted, theoretically minded view of the book’s central concept defines the rest of Badiou’s discussion with Truong. In Praise of Love touches upon topics seemingly unrelated to the matter at hand, such as the relationship of love to politics (politics unifies the collective while love diversifies the individual), and finds representations of love, both praised and criticized, in great art, from Romeo and Juliet’s” demonstration of the boundaries love transcends to the reductive, anti-romantic jealousy that eats away even at a brilliant writer like Proust. “Selfishness, not any rival, is love’s enemy,” Badiou says of the misapprehension of jealousy being a fundamental aspect of love. Such condensed and entertaining nuggets of wisdom are sprinkled throughout the volume, matching the breeziness of the book’s 100 pages while still making a passionate, intelligent case for the place of love in the world. Badiou references Rimbaud’s assertion that love needs reinvention, but for the most part In Praise of Love does not offer a new definition of the concept, merely a reinforced and rejuvenating case for the unending relevance of love as we already understand it.