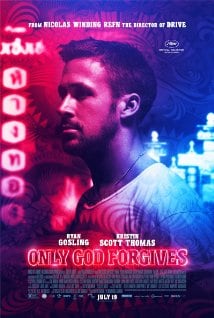 [xrr rating=2.0/5]Even at his best, Danish director Nicolas Winding Refn can try the patience of the most ardent film fans. Valhalla Rising was a hazy fever dream and, like his 2011 breakout movie Drive, featured a stoic, mostly silent protagonist prone to ultraviolence. Being laconic seems next to godliness in Refn’s world, and his newest movie, Only God Forgives, features more of the same. Unfortunately, it doesn’t have Valhalla’s epic quest or the kooky cast of Drive to rise beyond what it really is: a 90 minute slog filled with bursts of unpleasant violence.

Re-teaming with Drive star Ryan Gosling, Refn appears to have cobbled Only God Forgives together without a script; it’s a pulpy revenge tale filled with existential dread. Those who think ponderousness equates with gravitas will likely be fooled by Only God Forgives, but the rest of us will see: for the first time, Refn has completely fallen on his face.

Gosling plays Julian, an American living in Thailand with his older brother Billy (Tom Burke). Together, they run a Muay Thai arena/gym which fronts for their drug smuggling ring. Out of the blue, Billy decides to rape and murder a teenage prostitute (because people in Refn’s worlds suddenly decide to do such things) and he is, in turn, killed by order of a badass Thai police officer named Chang (Vithaya Pansringarm), who dispatches his own victims with a sword. After he’s done slicing and dicing (and there is a lot of that here), Chang goes to karaoke bars where he sings lovelorn ballads in front of his indolent cronies. Does something smell Lynchian here?

After learning about Billy’s death, his big bad mama Kristen Scott Thomas flies in to exact revenge on the men who killed her darling boy. See, Julian has always been second to Billy in mommy’s heart and Ms. Thomas (hair dyed blonde) arrives pissing vinegar and spewing venom. I suppose Julian has a complex, but the gossamer-thin plot doesn’t do much to develop it, making the film’s graphic climax all the more head-scratching.

Gosling is considered one of our finest actors, but he really does very little here. In comparison, his character in Drive could be a character out of a Woody Allen movie. You could try to make the case that Gosling does more with less here, but that’s simply not true. He stares out into space, gets his ass kicked, feels up his Thai stripper girlfriend and utters a few lines. After Drive, The Place Beyond the Pines and now this, Gosling should move onto something like voicing a Pixar film to avoid falling into a rut.

And the violence. Refn has never been shy with the red stuff in his films, but this one features some out-and-out hostile scenes, including a dismemberment by hair pin and a head completely destroyed with a baseball bat. But because Only God Forgives takes itself way too seriously, it’s unclear whether the violence is meant for shock or for us to revel in.

With its one-dimensional characterizations, poor performance by Gosling and art house pretensions, Only God Forgives is a near-complete failure. Refn definitely knows his way around a camera and his Bangkok is appropriately seedy and garish. But, no matter how important Refn seems to think the film is, it’s really nothing more than a poorly executed revenge thriller that lacks any sort of thrills whatsoever.