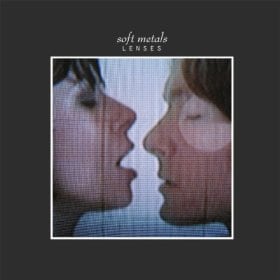 [xrr rating=2.0/5]I remember Terri Nunn’s breathy voice. Full of seduction, she made Berlin one of my favorite bands for a while. Later, Julee Cruise’s ethereal vocals on “Falling,” from David Lynch’s “Twin Peaks,” would help create the mood of dreamy paralysis that permeated that show. Electro-pop has come to rely on the trope of the fragile nightingale, burying her under lacquered coats of reverb as she adds analog soul to the mix. These women usually have fine voices, but all too often, the music lacks the depth to carry them. Sure, there are still standouts like Niki Randa on Flying Lotus’ “Hunger” or Sarah Kinlaw of Softspot, but too many other projects just go through the motions.

Soft Metals creates the same pairing of synthesizers and songbirds, but misses the mark on both sides. Even though their moody, minimalist electro-pop favors dance-friendly disco beats, it feels lackluster. Rather than provide a contrast, Patricia Hall’s delivery is often lethargic and wooden. It’s a shame, because she has great vocal tone, but it rarely finds direction. Hall and her partner, Ian Hicks, strive for a purist electronic sound, stripped down to 1980s tech. This aesthetic has potential, but the band can’t build up much enthusiasm. As a result, Lenses sounds like it’s angling for a new Blade Runner soundtrack, but it’s better suited for the background of a softcore, Cinemax movie from their target decade.

“When I Look Into Your Eyes” offers a promising synth-pop start. Hall’s voice has a hint of dread, but is largely emotionless. Wisps of Fairlight-style synth sparkle are the only color against the repetition of the backing loop. I can almost envision the matching movie scene of a voyeur watching a woman through her blinds. Hall’s flat effect vocals play to his obsession, but even her sighs sound perfunctory.

It’s not until the second half of Lenses that the band summons any energy. The instrumental “Hourglass” builds a heady trance groove and sets it against a relentless disco beat. The pure circle of notes from the start of the song remain at the center, but the accompaniment varies from synth-pop to shimmery electro-pop, piquing more interest than the first four songs together. A couple of songs later, “In The Air” launches with nervous percolation. Hall’s dreamy vocals finally find a reasonable counter-balance in clockwork pace of the music. The rhythm is mechanical, but there’s a welcome spark of engagement.

Soft Metals saves their best for last. The album closes with an extended instrumental that opens a new front on the band’s sound. “Interobserver” begins with a low-fi synth loop, full of intrigue and narrative tension. The buzzing echoes that wash through the loop evoke unsettling imagery. I imagine a snow-filled, silent video of alien beings bent on some unknown task. The music captures a sense of distance, but the wandering phase shift holds us rapt. The song barely attempts resolution, condescending to close with a quickening swirl of sound and even quicker fade. Unfortunately, “Interobserver” is an outlier compared to the rest of Lenses. While it proves to be a wonderful diversion, it begs the question of what might have been. If the band could pair this kind of evocative sound with Hall’s singing, they’d have something unique and powerful. Instead, they seem satisfied to settle for electronic ennui.