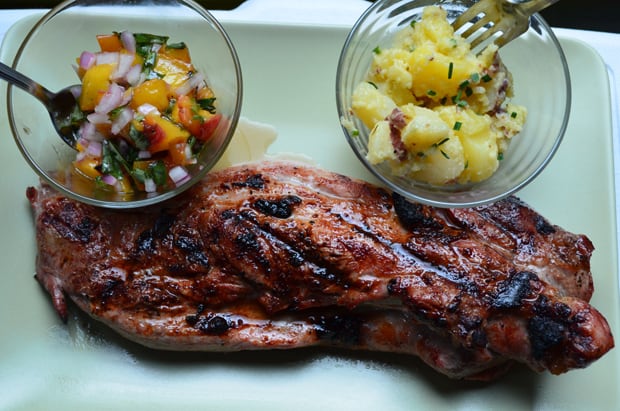 For some, eating a peach during the summer is probably as simple as finding the ripest one on the tree, wiping it off a bit and well, eating it. For others, if it could only be that simple. The problem is peach fuzz. I’m in the camp that can’t stand to touch, let alone hold a peach in its native state. Peach fuzz is my nails on a chalkboard. The sensation of coming into contact with it for a mere second or two makes my back tighten up around my spine, my face making gestures as if someone stuffed a bag of moldy prunes down my gullet.

The other problem is, fuzz aside, there are not too many things better than a ripe summer peach. An aversion to the fuzz has turned into a quest to figure out how to enjoy them. Pickling works, as does the occasional puree. But for the most part, when they start to come into the farm stands in mid-July they go right from the bag onto our grill. Grilling peaches heightens their natural sweetness, and the smoky char from the grill enhances their depth of flavor. Plus, it takes care of the dreaded fuzz fairly well. Want a simple summer dessert? Grill peaches over medium heat until they are soft and yielding, and serve with a scoop of vanilla ice cream. That’s it.

And while there are a couple of more steps to have a peach work in savory dishes as well, it’s worth the effort. A grilled peach salsa, with basil for an accent and vinegar soaked shallots as a bright, acid counterpoint makes a great condiment for all manner of grilled meats. This would work with chicken, duck or pork. For the purposes of this recipe we’ve dispensed with the former two because duck is a major pain to grill and chicken a major bore. Pork tenderloin isn’t exactly a night out on the town either. It’s the least naturally flavorful of the all of the different cuts of swine but it accepts marinades, dry rubs and condiments like grilled peach salsa well. It also cooks quickly on the grill, which is vitally important when you’re in the throes of a typically humid East Coast heat wave.

While we’re on the subject of summer heat and summer foods, a quick word on potato salad. Store bought potato salad is an abomination 99% of the time and, as you’ve probably noticed, if you’ve been to a back yard cookout lately, most people manage to screw up the pseudo homemade version as well at roughly the same rate. Hard cooked eggs, celery, mayo of a questionable quality and the misguided incorporation of vinegar all conspire to ruin this summer staple. It doesn’t have to be that way. Here’s all you need to make a proper potato salad: gently boiled potatoes, homemade mayo, salt, pepper and maybe some herbs and that’s it. Boil, make mayo (it’s easy), chop herbs, combine everything, chill and enjoy. Let’s stop destroying this, people, and get back to enjoying potato salad again.

Start your grill and aim to cook the tenderloin over medium high heat. Butterfly the pork tenderloin by making an incision straight down the middle of the tenderloin lengthwise. Flatten it out using the knife or with a couple of stiff strikes from a frying pan if it gives up a fight. Combine the spices and season both sides of the meat liberally. You may have a bit of the rub leftover. Grill for 5-7 minutes on each side, rest for a few minutes and then slice it crosswise into ½ inch thick pieces to serve.

Put the shallots into a bowl with the water and vinegar and soak them until the peaches are finished. Grill the peaches next to the tenderloin 3-4 minutes per side, starting with the flesh side and finishing on the skin side. They are done once their flesh has softened completely. Take them off the grill and, once they are cool enough to handle, dice them into rough, ¼ inch pieces. Drain the shallots and combine them, the peaches, basil and oil in a large bowl. Season to taste with salt and pepper and serve with the pork tenderloin.

In a food processor, combine the egg, vinegar, mustard, salt and pepper. Turn it on, and slowly drizzle the oil into the processor (99.9% of food processors have an attachment with a small hole at the top that makes this easy for you). Once the oil is all incorporated you have homemade mayo. This will keep for two weeks in a refrigerator.

Place the potatoes whole at the bottom of a large pot. Cover with cold water by 2 inches, bring to a gentle boil and let them cook for 12-15 minutes, until they offer no resistance to a pairing knife. Once they have cooled combing the potatoes, mayo, chives and pepper. Cover and refrigerate for at least 3 hours before serving.