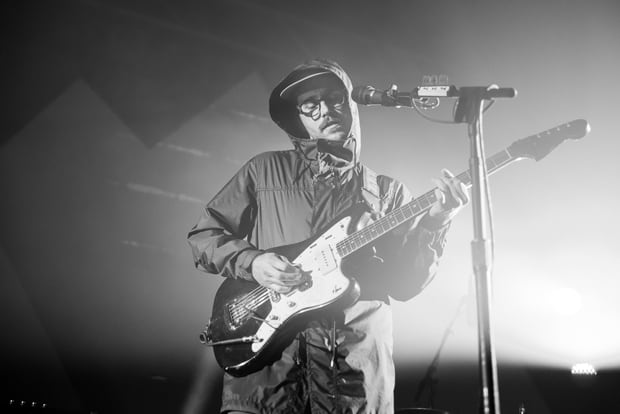 Portugal. The Man fittingly concluded their domestic Evil Friends tour in their hometown of Portland. Playing the Crystal Ballroom last Thursday, the quintet of psychedelic rockers brought the heat onstage in an already sweltering venue, awash in the trippy shape-shifting lightshow for which their live performances are famous and wearing their Beatles acid-years influences on their sleeves.

Many in the packed house were already slick with sweat before they whipped themselves into a frenzy when the band took the stage. As house music featuring reggae interpretations of Beatles songs (“Hello, Goodbye” being most notable) gave way to downed lights and a blasted “Unchained Melody,” Portugal. The Man emerged just as the Righteous Brothers’ peaked with the song’s crashing crescendo of the long-held need in “I need your love.” One of the more flawless entries for a band wrapping up a long US tour within the friendly confines of a hometown venue.

Green lasers panned across the towering white projection backdrop, one that was cut with four mountain-like jagged peaks at the top, and the band launched into the appropriately trippy frequent opener “Purple Yellow Red and Blue.” The song’s lyrics, “All I want to do is/ Live in ecstasy” captures Portugal. The Man’s overall aesthetic, one of rapture imbued with cynical religious imagery and a striving for transcendence through altered states.

Despite a lengthy discography, the band mostly stuck to songs from their 2011 breakthrough In the Mountain in the Cloud and recent release Evil Friends, and as they segued into the drone and buzz and distorted vocals of “All Your Light (Times Likes These)” from the former, the backdrop erupted with kaleidoscopic visuals akin to a mash-up of the Yellow Submarine animated film and the more bizarre offerings of “Aqua Teen Hunger Force.” Occasionally, the light show would utilize the shape of the peaked backdrop to produce more three-dimensional renderings such as phosphorescent pyramids.

Briefly cooling things off with the slowly chime and strumming-laden intro to “Evil Friends,” the band cranked up the intensity again during the second half’s fuzzy stomp as, behind them, giant fluorescent eyeballs winked open and closed. They routinely employ biblical references, and Jesus Christ got named dropped in “So American” from In the Mountain and again, later, in the new “Modern Jesus” (“Don’t pray for us/ We don’t need no modern Jesus/ To roll with us”). Acid washes splashed and dissolved across the backdrop during Evil Friends standout “Atomic Man.” The set’s pace, racing along like a dose of your favorite mind-candy through veins, hit a lull with the slow acoustic strumming and saccharine clapping and sing-a-long of “Sea of Air,” although due to the rising temperature in the building we all needed a bit of a breather.

Late set highlights included the 2011 album’s heavy-hitter “Got It All (This Can’t Be Living Now)” with its “Shake shake shake the night away” refrain. Sarcastic churchy imagery again hit the mark with the organ-infused and preacher-like vocal rhythms of “Holy Roller (Hallelujah)” and the opening “woos” and “aahs” of “Hip Hop Kids” fit the jubilant atmosphere of the ecstatic crowd with hands thrust in the air.

After closing out with a brief reprise of “Purple Yellow Red and Blue” that bookended the set with the invocation of the word “ecstasy,” the band left the stage and the houselights briefly powered up. But based on the roar of the crowd and heaviest stomping on the Crystal Ballroom’s bouncy floors that I’ve ever experienced, it would have nearly been dangerous for Portugal. The Man to not return for an encore. Of course, that was already in the cards, and they treated us to a lengthy one that included more overt Beatles references, with the distortion-heavy and churning guitars of a “Helter Skelter” cover and eventually segueing one of their original song’s with an outro of “Hey Jude” that had the entire building chanting “na-na-na-na.” When the band finally left the stage for good after the appropriate “Sleep Forever,” I was spent. The rush of cooler air and the glow of the downtown Portland nightlife served as a refreshing come down before heads could hit pillows, vibrant afterimages swirling behind closed eyelids.