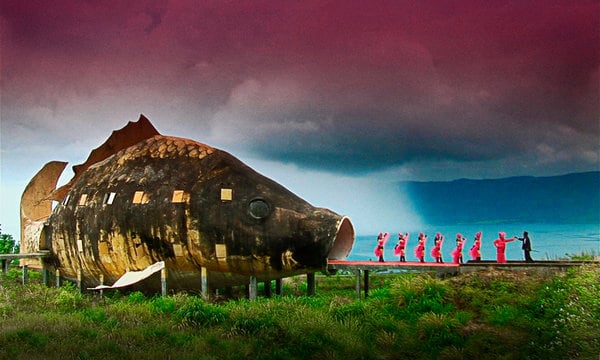 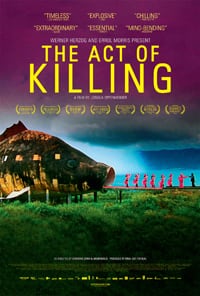 In the fall of 1965, there was a failed coup in Indonesia that resulted in the death of a half dozen major military officers. The retribution was furious and decisive, largely directed against communists in the country, who’d previously had a strong presence in the government. According to a graphic at the beginning of the new documentary The Act of Killing, approximately 1,000,000 people were murdered at the hands of military enforcers, a death count that was reached in less than a year’s time. It’s an unfathomable number, almost impossible for a filmmaker to wrap his head around. So director Joshua Oppenheimer cedes the responsibility of making sense of what happened to those who theoretically have the means to do so: those who perpetrated the horrible actions in the first place.

As is explained early in the film, the killers that Oppenheimer found were asked to recreate their killings as movie scenes, presumably given little coaxing one way or another. The purpose of the film is to see how these men, decades after their acts of evil, try to make sense of what they’ve done. They recreate them in a variety of ways, from zombified production numbers that use colorful Bollywood excess to sweaty recreations of scenes out of film noir, the latter acknowledging an inspiration for their rage-filled assaults that the killers reportedly drew from gangster movies. It’s a bit of circular cinema that would make Charlie Kaufman himself reach for a handful of aspirin and a bottle of scotch. It might be hoped that this grandiose artifice is an attempt by the killers to distance themselves from their unpunished crimes, but the opposite is true. It’s an extension of the privileged place these brutal men have held in their homeland, a grotesque celebration of self. The closest most of them come to introspection is a semantic debate about whether sadism is the same as cruelty.

As might be grimly expected, there’s little apparent remorse. The killers were acting under power that had been bestowed by a wide range of high-ranking officials. To their mind, they weren’t murdering people, they were just leveling justice against a group of individuals they had fully dehumanized. As they stand together in the current day, reminiscing about their actions in the past, they still refer to the eradication of communists as something that was done out of necessity. There’s even a scene in which several of these murderers appear on a talk show, complete with a host resembling some vile “Fox and Friends” drone who cheerily agrees that God hates communists, while the studio audience applauds their talk of mass extermination. The endemic lack of conscience is one of many deeply chilling aspects of the film.

While several men are featured, two are at the forefront of the film. One is Herman Koto, who might appear buffoonish but for his dark history. He has a bizarre penchant for dressing up in costumes that might have been pulled together by a drunken Divine if she raided Carmen Miranda’s old steamer drunk in a darkened room, but he’s also the man most likely to discuss his own evil acts as if nostalgically recalling an old garden party. A far more fascinating figure is Anwar Congo, if only because the film’s long process of revisiting his crimes against humanity scrapes the grime away from the damaged inner soul he undoubtedly thought he was free of. Congo fixates on dyeing his gray hair black in order to make his recreations more accurate and, with the curt pride of an office manager who’s stumbled on a more efficient filing system, he speaks about concocting cleaner ways to kill people. But he’s also rattled by the whole process: his past actions are too heinous to be redeemed by a late-life dose of regret. Watching this slowly emerging struggle is fascinating.

Oppenheimer never turns the film entirely over to these killers, though. He knows exactly when to prod them into revealing more of themselves. He also understands the importance of letting his camera roll to catch the undulating waves of conflict that hold the most telling details, such as the moment when the leader of the Pancasila Youth, an organization that was instrumental in running the death squads, takes issue with a recreated scene. He’s initially angered by the aggressiveness depicted in the simulation, arguing that it portrays the group in an ill light. But he eventually comes around to praising how the scene conveys the organization’s ferocity, insisting, even, that there viciousness could be improved. The essential contradiction of the people in the film is held in this single moment. On some instinctual level, they know their actions were atrociously wrong, yet on the surface they can’t stop defending the imagined virtue of their own blood-soaked history.