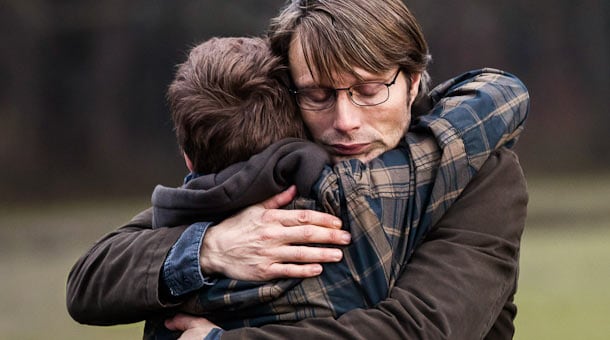 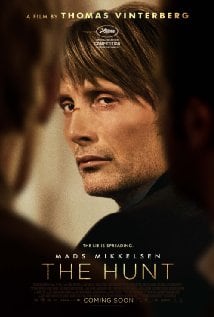 In Thomas Vinterberg’s The Hunt, a kindergarten teacher in a small Danish town is accused of inappropriate behavior with one of his students. But rather than tease us with a “did he or didn’t he” scenario, Vinterberg makes it clear from the start that his protagonist is innocent. The Hunt is more interested in showing us how these uneasy accusations can destroy a life rather than in creating a potboiler mystery.

In an extended opening, we meet Lucas (Mads Mikkelsen) who is part of a small hunting community. Vinterberg portrays this group – bound by the love of the hunt and good drink – enjoying some ribald bonding, but something dark lurks just beneath the surface. This is a community that values stoicism, a place where boys become men once they obtain a hunting rifle. Lucas, however, is a little different. Not the hale and hearty type, Lucas is reserved, reeling from a custody battle with his ex-wife. He works in a kindergarten, not necessarily the most manly of professions. The men in the village seem to accept Lucas; in the opening sequence we see him prove his masculinity by stripping down and diving into freezing water to aid a friend who foolishly jumped in sans clothing.

It takes time for Vinterberg to get to the accusations and to Lucas’ subsequent persecution, but he instills his film with enough dread that it is obvious that something wicked is coming down the pike. Through a series of unfortunate events, Lucas is wrongly accused of exposing himself to a student (the daughter of his best friend) and soon the entire community turns against him.

The most shameful thing here is that the ostracization of Lucas comes from an act of benevolence. Mikkelsen, best known for his tough guy roles in Casino Royale and Valhalla Rising, plays against type here, wounded, as his friends turn on him, and terrified, as the violence that skims beneath the community’s surface visits his home. It is a compelling turn for an actor better known for bashing skulls than emotionally penetrating them.

The Hunt is most fascinating when dissecting what happens to someone whose reputation has been destroyed. Child molestation is one of the worst crimes someone can perpetrate, which can mean that even if you’re name is cleared, doubts still linger. It is a stigma that never goes away. It is shocking just how fast Lucas’ community turns on him; soon he is not even allowed to frequent the town grocery store.

Intriguing and unsettling as it is, The Hunt is not a perfect film. Vinterberg cuts corners in his script, and, once the accusation hits, the movie seems to move a little too quickly to its resolution. Lucas never seems to consult with a lawyer and though he’s subjected to one horrible act of violence after another, doesn’t bother to call the police. It almost feels as if he enjoys his victimization, but that sentiment feels out of step with the rest of the film. However, Mikkelsen’s bravura performance keeps us firmly invested in Lucas’ plight, especially after it grows more heartbreaking. Vinterberg wisely avoids a tidy ending, leaving his protagonist looking over his shoulder, his life irrevocably shattered.