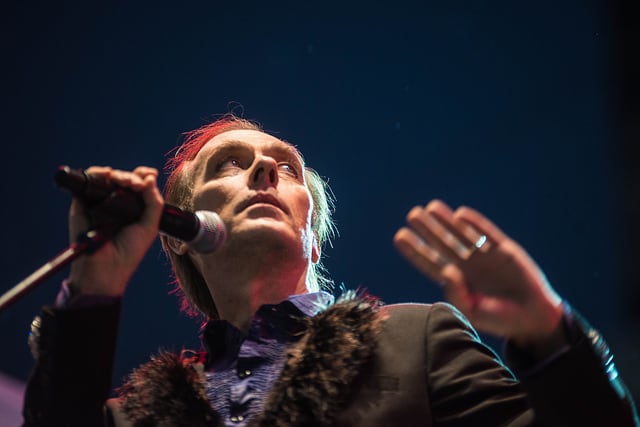 Seeing a show when you’re in your mid-thirties is a vastly different experience than in your twenties. For one, you think you’ve seen it all: the antics, lights and all the elements of a show can sometimes seem contrived and downright boring. While my cynicism sometimes gets the best of me, I will say right now that Peter Murphy’s concert at Portland’s Hawthorne Theatre was not that kind of show. While the venue was incredibly unprofessional, and the sound was absolutely terrible, this concert had all the raw elements of those shows we saw in our twenties that did blow us away. It was about the music and the performance, and Murphy and his band came off as nothing but authentic. I also have to say that Ours was a fine opener, augmenting the professionalism of all of the performers even more.

Opener Mike Shapiro and his band seem to be an ill-fitting opener for an icon of the deathrock movement. The only similarity is their shared penchant for wearing black. The band is uninspiring, strumming on distorted, loud versions of blues-inspired songs. I feel like I’m at a concert in the ‘80s where they didn’t know what to do with our kind, so they just stick whatever band is wearing black on stage first because, whatever, it doesn’t matter. I feel a little like I’m in high school, where everyone thinks that because you wear black, you must like metal. We decide to skip it and jet out to the adjoining bar and patio to savor the fresh air while we can get it.

We return to the venue to see Ours, who open their set with “Pretty Pain,” the lead track on their newest album. Jimmy Gnecco, the lead vocalist and songwriter, is chewing gum like a New Jersey stereotype throughout the performance. Despite the internal heat of the venue, which must be near 100 degrees, Gnecco is clad in a leather jacket for a surprisingly long amount of time (four songs, I think). His vocals are crystal clear and the lead guitar provides a countermelody like an eerie, pretty soprano. The rhythm is plodding and staccato, while everything else sonically swims over the top. Gnecco flawlessly crosses the swagger of the Afghan Whigs with the croon of Journey and the melody of early Radiohead, a ballad that sounds like something from Pablo Honey. This is both emotive and pretty.

The six-piece deftly plays about 10 songs over the course of the next hour or so. They provide a perfect transition to Murphy, especially when they end their set with two epic tracks that seem inspired by Bauhaus. The guitarist plays the same riff throughout the entire song, true to the Gothic format, defying the band’s general ethic. A thunderous, tribal drumbeat helps to not only provide the genre bridge from the rock tunes that they’ve played, but also adds to the experimental ambiance of the stage, prompting my illusory mistake: at times, I almost spy a young Murphy in Gnecco’s thin, sunken cheeks and lanky frame.

Murphy starts on time at 10 p.m., opening with “King Volcano,” a 12-string-laden waltz ballad. While he’s obviously aged from the last time I saw him nearly 15 years ago, I’m surprised at how his presence overwhelms the venue. Murphy still has a lithe, demure attitude, and his growl is excellent. His graceful glide effortlessly moves him across the stage toward the edge at screaming, adoring fans spanning four decades in age. Seriously, they’ve not shut up in the last 10 minutes.

The leather jackets—a sea of black—and mohawks are as prevalent as at a show at the Hammersmith in London circa 1983. Despite the wrinkles in Murphy’s face, his voice is just as powerful, graceful and melodic as it was 30 years ago. I feel as if I’m somewhat transported to the heyday of Goth in the early ‘80s, when Bauhaus was one of the first deathrock bands to come out of the U.K. I’m surrounded by what I consider “my people,” friends of 20-plus years as well as young kids sporting eyeliner, chains and dyed hair.

By the time they break into “Double Dare,” it is obvious that the band is perturbed with all the technical issues imposed by inept venue staff. But they’re pro about it and never miss a note. It makes me a little sad that they even have to deal with this shoddy place. Yet my skepticism is melting away, due to the performance. It looks like Peter Murphy employed Nine Inch Nails as his backup band, which is fitting considering it is my generation that iconizes this music as canon.

“Boys” employs Murphy’s characteristic theatrics: played on a completely darkened stage, Murphy’s light-bulb love affair comes to life as he periodically flicks on a flashlight (now LED) to the double-hits of the bass and drums. I comment to my friend during “In the Flat Field” that, “This is what Goth is! Look, the bassist is playing the lead guitar!“ He responds: “This is good, right?”

“Absolutely. I’m stoked. This is great.”

I am almost driven to tears by, of all songs, “Spy in the Cab.” On the album, it sounds entirely electronic, with a high-pitched, nearly EKG-like beep punctuating a staccato floor-tom/electronic hi-hat combination. My friend muses to me that the electronic drums are “really cool,” and I retort “That’s the bass guitar!” I point to the bassist on his final fret on the high string playing a harmonic. This sort of stuff is why you see a band live. Both our jaws drop.

During “Bela Lugosi’s Dead,” Murphy pulls out a pedal contraption that creates a cacophony of strange, non-musical noises. He dons spectacles in the low light, a reminder of his age. Seeing it live is making me giddy, and I realize that I almost missed out on this due to my indifference. I never thought I would see this song live—this legendary band is playing it right here and now. “Stigmata Martyr” is played flawlessly on a fretless bass, and in the steamy nightclub, the drummer keeps pounding away at the awkward, hooky beat. “In nomine patri et filii et spiriti sanctum!,” screams Murphy exactly as he did 30 years ago. I am blown away at how meticulously tight this band is. The bassist brings all of the music together, while the guitarist shrieks, wails and is completely experimental in true Gothic roots fashion.

By the time the band finishes their second encore with “She’s in Parties,” they’re soaked to the bone with sweat, and I’m completely impressed with their level of musicianship and their stamina. They are by far the best Bauhaus cover band I have seen. Still, the memories I have banked on this would have been worth every penny of the $30 ticket price. “Hollow Hills,” played emotively by the band bathed in green light, will always be a picture that I will not only refer to in my head, but that I have captured on my Instagram feed as the shining example of how splendid this band sounded and looked tonight. While the show started off on the wrong foot, the sound was abysmal and the space was abhorrently hot, I was impressed with Gnecco’s pipes and the instrumentation of his band, Murphy’s absolute authenticity in delivering Bauhaus songs and a really enthusiastic crowd, especially for Portland. Thanks for making a jaded guy want to keep seeing shows, Mr. Murphy.