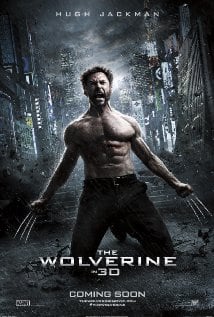 [xrr rating=3.25/5]Hugh Jackman has been playing Wolverine for 13 years now, since he replaced Dougray Scott in Bryan Singer’s first X-Men movie. That’s a long time to be invested in a single character, long enough for it to likely become the defining role of his entire career. Despite the fact that The Wolverine is his sixth turn in the role, Jackman still seems just as invested in the character and frankly, continues to give what could easily be a one-note antihero an actual onscreen depth that few comic book characters receive. Without a doubt, he is the linchpin of James Mangold’s latest installment of the X-Men franchise, and not just because he’s the title character. Whenever the plot, which loosely adapts Chris Claremont and Frank Miller’s brilliant 1982 self-titled miniseries, threatens to get too convoluted, or when a thinly developed side character starts to get too much screen time, Jackman is there to rescue it with his charisma and ability to not look ridiculous in muttonchops and claws.

The Wolverine opens promisingly, with a long panning shot over a placid-looking waterfront city. Then air raid sirens begin to roar and soldiers in WWII-era Japanese uniforms begin to evacuate a POW camp as bombers appear in the sky. A lone Japanese soldier frees the American GIs, and then, after a moment of hesitation, runs to a heavily chained pit in the ground containing a soldier in brutal solitary confinement: Wolverine. While the senior officers commit ritual suicide, Wolverine throws the soldier in the pit and protects him with his self-regenerating body from the immense explosion that follows them. The small city turns out to be Nagasaki. It’s a marvel of storytelling efficiency, a nearly wordless, fast-paced sequence that conveys a huge amount of character development and back story. But after that things get overcomplicated fast.

Living the life of a forest hermit (albeit one stocked with whiskey and a battery-powered radio), Wolverine is persuaded by a young woman named Yukio (Rila Fukushima) to return to Japan to bid farewell to that solider, who turns out to be Yashida (Haruhiko Yamanouchi), now an ancient, dying man and the head of the most powerful corporation in Asia. Yashida attempts to persuade Wolverine to transplant his healing factor into himself, which will allow him to continue protecting his corporation and family; the trade off is supposed to allow Wolverine to age normally and eventually die a peaceful death, presumably free of the burden of memories and the loss of loved ones he has faced over his immense lifespan. Wolverine declines the dubious invitation, but finds himself drawn to Yashida’s granddaughter Mariko (Tao Okamoto) and at odds with his son Shingen (Hiroyuki Sanada). Somewhat confusingly, the mysterious Viper (Svetlana Khodchenkova) surfaces at around the same time, seeming to be involved in the attempt to steal Wolverine’s healing power.

Throughout the course of the film, Wolverine (who is mostly referred to as Logan and never appears in superhero regalia) wakes from a series of dreams in which he talks with the deceased telepath Jean Grey (Famke Janssen). In a nice touch, it’s left mostly ambiguous whether these dreams are simply Wolverine’s tortured psyche unable to forgive itself for her death or her psychic abilities projected into his mind. It also allows Jackman and Mangold the opportunity to show the immense pain that Wolverine feels while allowing him to remain an uncommunicative, borderline-misanthropic loner. It also ties the plot to the events of X-Men: The Last Stand. But by the fifth or sixth time Wolverine hazily wakes up after these visions, the device starts to feel like a bit much.

And that’s the central weakness in The Wolverine. While it’s anchored by a great lead performance (Jackman switches between wry humor and ferocity with ease), the plot frequently feels overstuffed. The nature of the antagonists is so lost in Japanese stereotypes (futuristic corporations! Yakuza! ninjas!) that it seems like Mangold and writers Mark Bomback, Scott Frank and Christopher McQuarrie were trying to cram in every story idea they could. Even with an two hour-plus runtime, there aren’t enough minutes to give every vital character the emotional weight needed to care about them, unless you’re given to feeling sympathy for plot mechanisms. In particular, one ninja leader (Will Yun Lee) is so undeveloped that his quickly switching motivations are mostly baffling; while Viper simply comes off as a throwaway character who does little more than fulfill the script’s need to knock Wolverine’s near-invulnerability down to a more human level.

While the plot has a few too many moving parts, it does handily supply what we all go to a Wolverine movie for: serious claw-slashing action. Several action scenes throughout The Wolverine match anything the X-Men franchise has yet done, including a fight sequence on top of a speeding bullet train. The chemistry between Mariko and Wolverine is well developed, as it is with Yukio; best of all, the movie expands Wolverine’s basic impulses and character without changing his essential nature. As a revitalization of the character after the grotesque debacle of X-Men Origins: Wolverine, The Wolverine is a success. Though it’s hampered by a PG-13 rating (honestly, if he’s got claws, there should be some blood) and an over-convoluted story, it gives back some much needed dignity to an iconic character.