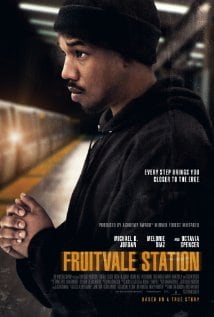 [xrr rating=3.75/5]Fruitvale Station’s release comes at a germane time where the country is embroiled in debate about what constitutes self-defense vs. wanton murder. In telling of the true story of Oscar Grant (Michael B. Jordan), a young African-American who was unarmed and handcuffed when fatally shot by police on New Year’s Day 2009, Fruitvale Station gives voice to yet another unfortunate (such as Trayvon Martin) who was wrongly murdered.

Oscar is just out of prison, following a short stint for drugs. When we meet him, Oscar is still getting by selling marijuana. Fruitvale Station follows Oscar’s fateful day, leading up to his shocking death. In its first section, Fruitvale is a circadian look at Oscar’s life: he argues with his girlfriend Sophina (Melonie Diaz) and then goes to the grocery to buy food for his mother’s (Octavia Spencer) birthday. Director Ryan Coogler injects these early scenes with a lockstep cadence of veracity, giving us time to meet Oscar before his inevitable death.

Fruitvale Station is at its best in these early scenes (save one purple section where Oscar cradles a dying dog) as Coogler gives us the story of a young black man in crisis. Oscar wants to stop selling drugs, but his propensity for tardiness and hot-headedness has undone numerous work opportunities in the past. He lies to his family about being unemployed and yet still must find a way to make rent and take care of his four-year-old daughter. These early scenes are loaded with authentic concerns that Coogler and his actors bring out as tactile and palpable.

Jordan, so good in “The Wire” and the severely underrated television series “Friday Night Lights,” positively sizzles as Oscar. In a star-making turn, the actor convinces us of Oscar’s desperation and his desire to provide for his family. The film’s best scenes come when Oscar visits his mother for her birthday party. Together, they cook up gumbo, sit around and talk. The section crackles with the intimacy that only comes with family, but the scenes are filled with dread because we know that Oscar is slated to die in a just a few scant hours.

Fruitvale Station’s final act is its most problematic, but it’s also the one where Coogler goes into hyper drive with the racial themes that lurked in the film’s prior recesses. Here, his depictions of race actually hinder the film rather than further its message. Following the birthday party, Oscar, Sophina and a group of friends ride the train to San Francisco to see the fireworks. When the train is delayed, an impromptu party breaks out which feels more like a United Colors of Benetton commercial than the same hard truth Coogler has pushed in prior acts. Everyone from white boys to lesbians dance, count down and kiss. It feels joyous, but we also know something bad is about to happen, making the scene out to be more like a buffer than truth.

I’ve always struggled with films based on true stories because movies don’t replicate life. Coogler bookends his film with real footage of Oscar and his family and in some ways, this inclusion undercuts the actual feature. Rather than present a story in filmic terms, I found myself wondering at various junctures throughout the film, “did it really happen like that?” Yes, the themes are there, but none of us have a dramatic soundtrack following our every movement.

If anything keeps Fruitvale Station from being a great film, I would say it needed to make an even bolder statement about the condition of young black men in this country. Oscar’s death is sudden and horrible, but Coogler instead decides to concentrate more on his relationships with his mother and daughter than take a look at the bigger picture at play here. While not as insidious as the odious Crash, Fruitvale Station refuses to look at why we’ve gotten to this point and is simply satisfied showing us the end result via scenes that are both commanding and forced, leading to an uneven film that should have been a tour de force.