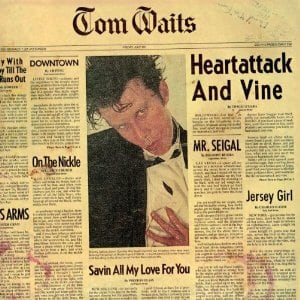 The discography of Tom Waits can generally be divided into two, B.C. and A.D.-type eras — the jazz-folk barroom balladry of his first seven records on the Asylum label and the madman-making-a-carnival-out-of-a-junkyard that followed. To zero in even further, one could make the case that Waits’ oeuvre has no fewer than five distinct periods, but we’ll go with the two broad classifications, for it is the record that serves as the line in the sand between them that is the focus here. Heartattack and Vine, released in September 1980, is something of the bastard middle child in the barking bard’s legacy, not quite fitting into the early camp’s beatnik lounge stylings, not exactly at home with the deranged experimentalism of 1983 onward. Rather, it’s a farewell to the former and a forecast of the latter. Often overlooked, perhaps because of the difficulty to categorize it, and overshadowed by its immediate successors, Heartattack and Vine deserves far more credit than it gets (that bitchin’ cover art alone should garner it some sort of praise). It’s a showcase for an artist undergoing his most significant transition, a werewolf in mid-transformation, and stands as a rusted signpost that Waits’ stylistic shift wasn’t as abrupt and jarring as some might think.

The new element in Waits’ mix that serves to steer Heartattack and Vine away from the tone of the previous Asylum records is the electric guitar. Waits’ first tinkering with the instrument occurred on the album’s immediate predecessor, 1978’s Blue Valentine, but its influence grows from a presence to a dominating force here. What results is a harder-edged, jagged blues sound, a scaffolding Waits would come to build his tableaus around from here on out. Take the lead-off title track for example: a swampy dirge of a tune, building slowly with disjointed guitar licks, clamoring drums and sinister saxophone as Waits grunts in the background like an ogre rising from a delta bog. Waits traded a traditional croon for a belted-out, guttural yowl with his third record, but this marks the first instance where he switches from Louis Armstrong aping to channeling the wayward spirit of Howlin’ Wolf. The song also offers up some of Waits’ finest lyrics up to this point, painting a callous, dog-eat-dog urban scene peopled with grifters, punks, druggies and precocious debutantes who think they’ll hit it big. Full of great one-liners, the song contains one of Waits’ most enduring couplets: “Don’t you know there ain’t no devil/ That’s just God when he’s drunk.”

Exempting the instrumental “In Shades,” which sounds as though it emanates from a humid, smoke-filled afterhours club, the album adheres to a pretty strict paradigm: lurid and rabid blues numbers alternating with piano-led ballads. The former hold up far better than the latter, exhibiting traits Waits honed and perfected in successive releases, while the more somber cuts retain the mawkish elements the songsmith largely abandoned hereafter. Limiting the ballads’ effect, quirkily enough, are the needless orchestral embellishments smattered all over them. “Saving All My Love for You,” “Jersey Girl,” “On the Nickel” and “Ruby’s Arms” are all fine songs composed of moving sentiments and Waits’ devastating lyrics. At the same time, they come across as overwrought and melodramatic at times due to the schmaltzy orchestral violins swelling all around them. In truth, the songs veer dangerously close to being cornball and would be far stronger if stripped of this component and reduced to only Waits’ voice, piano and maybe a little more subtle instrumentation. Thankfully, this approach that had become a vestigial limb was shed by Waits like a reptile’s outgrown skin.

String sections aside, “Jersey Girl” is still one of Waits’ finest compositions. A heartfelt paean to wife Kathleen Brennan, whom Waits married a month before Heartattack and Vine’s release, it builds slowly as Waits details his anticipation of meeting up with his girl tonight. There is a simplicity in the lyrics, a romance that isn’t encumbered with overdone decorations: “Don’t you know all my dreams come true/ When I’m walking down the street with you?” What makes it such an effecting tune is that Waits isn’t in character, but is at his most genuine and vulnerable. For a songwriter who has built most of his career personifying fictitious characters, this is a significant moment.

The dirty blues ditties remain more enjoyable, and are Waits’ first foray into the rock realm as well. “Downtown” is led by a jazzy electric organ and has the funky feel of a strut down skid row, the narrator scoping-out all the reprobate denizens inhabiting the area. “’Til the Money Runs Out” follows suit, a noir narrative straight from a Jim Thompson pulp novel. A shuffling drum pattern carries a paranoid tension as Waits foams at the mouth with seedy visions: “Can’t you hear the thunder?/ Someone stole my watch/ I sold a quart of blood and bought half a pint of scotch.” Then there is “Mr. Siegal,” which opens with some of the most badass lines in music history in “I spent all my money/ In a Mexican whorehouse/ Across the street from a Catholic church/ Then I wiped off my revolver/ And I buttoned up my burgundy shirt.” The song moves with a drunken swagger or hungover stumble, a chorus of bar friends clattering in the background echoing Bob Dylan’s “Rainy Day Women #12 & 35.” That the piece drifts into “Ruby’s Arms,” a pathos-laden tale of regret in the making, is about a perfect comedown closer (or it would be without those damn strings).

With Heartattack and Vine, Waits simultaneously closed the door on his old persona and crafted a new one. It’s telling that the album was his seventh in eight years, which he followed with a three-year drought before unveiling the first of his avant-garde tastes of madness, Swordfishtrombones. Maybe the gap was to allow a farewell of the past and time for the new elements, tantalized on Heartattack and Vine, to mature a bit longer. Regardless, the record remains as a beacon proving Waits’ move toward the macabre and demented, the idiosyncratic and the incomparable, was not as out of nowhere as has been represented.