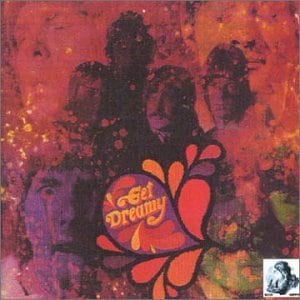 [xrr rating=2.75/5]Norwegian psych-rock pioneers the Dream released exactly one album in their brief career, 1967’s Get Dreamy, and the ever-inquisitive folks over at Shadoks Music have seen fit to release this nugget on CD. Boasting a 16-page booklet crammed with color photos and copious background information on a band that most rockers outside Scandinavia have never even heard of, the album promises to be a platter of rare and tasty nuggets from the fertile minds of some of Norway’s most progressive musicians.

Alas, it’s not quite that. There are a few good songs here, and one masterpiece, but Get Dreamy is, for the most part, unmemorable— proof of the old adage that most obscurities remain obscure because they deserve to.

First the good news: the album’s third track, “Ain’t No Use,” is a blistering squall of feedback, distortion, wah-wah guitar, screeching organ, stoned-out lyrics and nearly-flying-off-the-stage percussion. The fact it staggers on for an unrelenting eight minutes-plus just makes it that much better. Vocals here are provided by Terje Rypdal—three of the four band members contribute vocals on various tracks—and his voice is simultaneously loose and focused. Better yet, he knows when to shut the heck up and let the band jam, and jam it does, veering into some seriously freeform freak-out by the midway mark. At certain points, it sounds like each musician is playing a different song at the same time, but who cares? It all coalesces, somehow, into a mind-numbing fadeout, but it could easily have rattled along for another 10 minutes.

“Ain’t No Use” sets a pretty high bar, and it’s one the band never reaches again. This is too bad, as the listener spends the remainder of the album hoping for something that will match or even surpass it. When it doesn’t happen, the other, perfectly serviceable songs are perhaps thrown into a more negative light than they deserve.

The instrumental “Night of the Lonely Organist and his Mysterious Pals” is a diverting jam, notwithstanding its cringe-inducing title (hey, it was the ’60s), with Christian Reim taking center stage on organ, as you might expect. “Hey Jimi’ is a tribute to Hendrix, who was a hero to the band—a copy of their album was forwarded to him through a mutual friend and was discovered amid Hendrix’s belongings years later. The tune is heavily guitar-centric, aptly enough, and features some nifty layered vocals too.

For all the high points, though, there are any number of forgettable exercises in rock-by-the-numbers. Opener “Green Things (From Outer Space)” brings soulful vocals from Tom Karlsen but not much else, while “Emptiness Gone” is a saccharine downtempo ballad with egregious lyrics. So is “Driftin’.” So is “You.” There is far too much of this sort of thing from a band capable of “Ain’t No Use” or, for that matter, the spontaneous in-studio jam of album closer “Do You Dream.”

A mixed bag, then, but an interesting one for rock hounds who just can’t get enough of these obscure 1960s rarities. It’s wildly inconsistent, but with a roughly 50-50 split between fuzzed-out stoner bliss and radio-friendly dullness, Get Dreamy is a record that will appeal to listeners who tend to see the glass as half full.