February 25, 2021
Home Music Lemuria: The Distance Is So Big 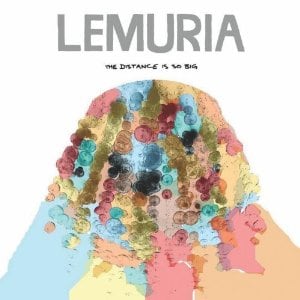 [xrr rating=3.25/5]Lemuria might not have the exotic grandeur or mystery their mythical namesake implies, but with third LP The Distance Is So Big, they prove themselves a capable rock band with just the right amount of quirkiness. What sets them apart is their melding of the sweetest pop elements with aggressive garage rock. Sonically and lyrically, they contrast naïve innocence with cynical experience, in the process creating some borderline anthems for frayed youth.

Guitarist-vocalist Sheena Ozzella is responsible for the pop end of the Buffalo trio’s makeup, her twee voice more inclined toward dream pop, lilting and precocious as it is. One would expect this element to clash with the often ramshackle punk clatter of Lemuria’s instrumentation, when actually her vocals elevate the band as a whole, akin to imbuing rich colors on a concrete-gray canvas. Second to Ozzella’s voice, the most notable component here is Max Gregor’s bass playing. Often dominating the songs, it reverberates as though its strings were struck by a mallet soaked in sludge. Instead of being grating, the discord among Ozzella’s voice and Gregor’s bass is the intriguing ace in the hole for Lemuria.

After the instrumental lead-in of “Michael and Stephen Moon,” the record kicks off properly with “Brilliant Dancer,” swaying initially with a steady drum pattern, piano notes and Ozzella’s cooing before washes of electric guitar come in. At the 1:50 mark, a drastic shift occurs in the time signature, almost to the degree that on first listen, one might think a separate song has emerged as a flurry of percussion battles with steady keyboard plinking. Next track, “Clay Baby,” features drummer Alex Kerns on lead vocals, the surging drive of the piece and the deadpan quality to Kerns’ voice giving it a Dinosaur Jr. feel of earnestness. When Ozzella harmonizes with Kerns on the chorus of “She takes the air out of my world/ I can’t breathe without her,” you’re left wondering whether this couplet is an expression of romantic devotion or dark addiction.

“Paint the Youth,” one of the album’s finest cuts, grinds, shutters and stops irregularly with digital sound effects punctuating the background. As it winds down, a rumbling low end offsets the idealist sentiment of “It’s never too late/ To be what you might have been,” repeated as a mantra from Ozzella and Kerns. The record takes its title from a line in the sun-soaked centerpiece track, “Oahu, Hawaii,” a breezy summer tune. The track builds with subtle grandiosity, its verses dominated by strained cello before breaking into a floating chorus of the two vocalists alternating their recitation of its title. Lemuria lets their ‘80s punk influences reign on “Public Opinion Bath,” two minutes of sneering, speedy ferocity with one of the record’s most memorable refrains: “You started making your own bed/ Doctors said it would make you feel less like a shithead.”

Ozzella evokes pathos in the introspection of “Congratulations Sex.” A bitter break-up resolution, she alternately sounds dryly determined and achingly vulnerable as she addresses a relationship that has grown stale and mundane. The guitar swirls and shuffling drums form a cocoon around her as she calls out her lover’s overstayed welcome, likening his presence to a cinderblock around her neck. The hushed “Survivors’ Guilt” follows, having a Pixies paradigm with Kerns’ whispery vocals and understated musical backing on the verses, then detonating to a greater volume and increased tempo in the verses. Closing track “Ruby” brings back the heavy-hitting percussion and crunchy guitar work, although, like many of the songs on the record, it ends rather abruptly. As such, the album stops on a clunky note, sans much in the way of resolution. That said, The Distance Is So Big is a progression in Lemuria’s artistic growth and all indications are that this trajectory is going to continue.