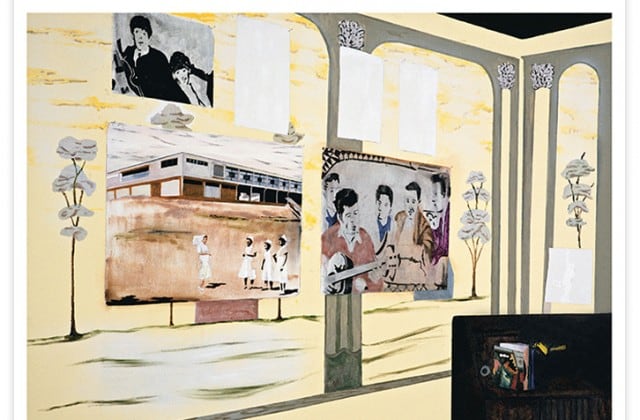 David Lynch has always had a thing for mysterious, alluring women. His film work has long reflected this, but lately so has his music. His second album, The Big Dream, takes a page from his first in aligning Lynch with an enchanting and established female vocalist for one of its singles. Last time around it was Karen O leading off Crazy Clown Time with “Pinky’s Dream,” but recently Lynch promoted his sophomore effort with a far better tune, one featuring the fragile, porcelain doll voice of Lykke Li. While Lynch’s own boyish cadence hits the mark throughout this more cohesive second album, nothing tops Li’s haunting vocals on “I’m Waiting Here,” as this bonus track and lead single—even more so than the rest of Lynch’s musical work— conjures up images of lost highways, white picket fences and slow-motion sequences of the tantalizing and star-crossed Laura Palmer. – Josh Goller

While cherished Minneapolis hip-hop outfit Atmosphere have usually let a few years fall between albums so their official releases can breathe, the boys have always made sure to drop enough material in the meantime to keep fans satiated. Recent years have seen them release a new single song to set off each of their tours, and this year’s featured jam to promote their dates with Slightly Stoopid is the impressive “Bob Seger.” An exploration of how the indie-rap scene has changed over the past decade from rapper Slug’s perspective, “Bob Seger” is both a comforting acknowledgement for the group’s longtime fans as well as a song that creates a context of the group’s journey for newer listeners. Also, “Bob Seger” slyly manages to tuck subtle references to the track’s namesake in several lines, adding a fun bonus to the listening experience for fans that have varying degrees of familiarity with Bob Seger’s catalog. Atmosphere has outlasted several generations of their contemporaries, and their commitment to regularly creating tracks like “Bob Seger” is a shining example why. – Chaz Kangas

You can’t say Beck doesn’t give us choices. Though it’s been some time since an actual LP hit the shelves, and there’s report of a tandem of records due at some point, he’s not exactly sitting idle. In and around sheet music packages and production for the likes of Stephen Malkmus and Charlotte Gainsbourg, there’s been a fairly steady stream of actual Beck releases, be they in the form of genre-bending 7” singles. From the country humor of the Jack White-assisted “I Just Started Hating Some People Today” to the recent electronics of “Defriended,” Beck has been serving up bite-size snapshots of the vaguely familiar with enough regularity to keep loyal fans interested. “I Won’t Be Long” leads off his second 7” in a month, and it finds him further exploring electronic textures, though in more polished, accessible form. With reverb-soaked vocals and a pop groove that would be perfectly at home on a Phoenix record, “I Won’t Be Long” offers hints of what Modern Guilt might sound like if it were recorded in 2013. With nonsensical lyrics that may or may not be a message to patient fans, Beck sings, “I’m counting down the minutes/ From an hourglass full of ice.” At least Beck’s providing the entertainment while we wait. – Mike Randall

Reggae music has its roots in American R&B, so it’s appropriate that modern reggae periodically returns to the source for new trends and inspiration. On his latest single, “Vixen,” Gyptian borrows some Auto-Tune, touches of electronica and a modern pop aesthetic and melds them with his solid reggae sound. The track leads off with an over-amplified dancehall DJ intro and quickly slips into a gently swaying roots groove. He’s joined by singer-songwriter Angela Hunte in some sexy interplay, showing that she’s just as comfortable with Jamaican stars as she is with rappers like Jay-Z and Snoop Lion.

The track is an early taste of Gyptian’s upcoming Sex, Love & Reggae, which is targeted for a late October release. – Jester Jay Goldman

The latest from Auxiliary—the small label which began as a brand for the chilled out, emotionally rich work of ASC and a few of his like-minded peers—is Machine Love EP under the collaborative moniker Veil. “Planet X” orbits soothing chords, rapid chipped beats fire off campfire sparks that fade into angel-sigh synth notes. Melody shows up intermittently just to keep the track on course while the big player, not surprisingly, is the low hum of rolling bass that cushions six minutes of calm reprieve—a timeless and easy break from the summer formula of breakneck drops and thumpers. This is downtime for the star-lit ride home from the beach party. – Darryl G. Wright

There is a moment about two minutes into Suede’s “Sabotage” where the song opens up and Richard Oakes’ guitar soars into the stratosphere. For those familiar with Suede’s ‘90s work, that transcendent moment is a gut-punch of desire (“Her will is done”), all spacey flange and shimmering harmonics.

And it feels good to have the band back. If Damon Albarn is Britpop’s Wordsworth and Liam Gallagher Coleridge, Brett Anderson is its Lord Byron. While many find Suede’s music too theatrical and yearning, songs such as “Sabotage” should win them over with its operatic reach. After a 10 year hiatus, Suede has returned and with determined songs like this one, let’s hope they are here to stay. – David Harris