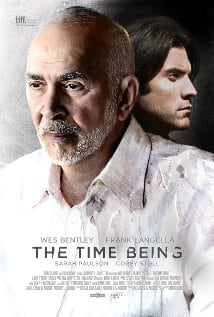 [xrr rating=1.75/5]Daniel (Wes Bentley) is a struggling artist and his own worst enemy, a perpetually cranky and combative man who sabotages the sales of his own paintings. He slacks off at his part-time day job, neglects his wife and young son, and always looks to everyone else to solve his problems. Lucky for him, a potential solution arrives in the form of a mysterious patron, Warner Dax (Frank Langella), who hires Daniel to film short scenes of children at a playground and a sunrise over the ocean. Soon Daniel learns that Warner has been grooming him for an assignment to spy on people the rich patron was once close to.

The Time Being, Nenad Cicin-Sain’s directorial debut, is wholly consumed by this contrived scenario and its tired stereotypes of moody artists. In an attempt to leave room for ambiguity in the characters’ motivations, Warner Dax’s intentions remain so ill-defined that disturbing questions cannot be avoided. How much spying has Warner done on these people, and who has helped him with this project before Daniel arrived? The Time Being dubiously presents Warner’s care for those he surreptitiously monitors as a valid excuse for his violations of their privacy, his entitled behavior excused by his own artistic temperament.

Daniel’s paintings are stark black and white abstract affairs which all too pointedly mimic his allegedly troubled soul. Yet for all his disaffection, the guy must be doing something right; he lives in a gorgeous, well-appointed home, despite being unable to sell his paintings and having to work part time as a paint mixer down at the local hardware store. It’s impossible to get a bead on him as a character, in part because the script calls for him to be an idiot at some moments, a genius at others, financially strapped in one scene, but with outward signs of success in the next. Further complicating matters is Bentley’s dire performance. He walks through the role deploying his well-practiced sourpuss face and little more, and when the film calls for him to crack a smile, he can only bare his teeth and grimace.

Cinematographer Mihai Malamaire, Jr.’s visuals are uniformly lovely, as one would expect from the director of photography of last year’s The Master. The compositions are heavily calculated, with interiors composed of meticulously-placed furniture and light sources, often lit in Vermeer-like chiaroscuro; exteriors are framed in perfect 2/3 – 1/3 ratios with the requisite foreground piece tying it all together. It’s beautiful to look at, but the self-conscious construction of every scene as a painterly landscape forces the audience to view the story through the eyes of the artists in the film. Unfortunately, The Time Being undermines this by failing to flesh out the characters, only weakly implying any positive traits that might allow us to warm up to them. The result is a series of delightful visuals that become nothing more than a cold and impersonal cinematic conceit.

Daniel and Warner are broken men whose myriad problems hurt the women in their lives. Though the script occasionally moves toward exploring the issue of women being relegated to nothing more than props or muses, the film itself indulges in what it intends to condemn by treating its actresses in exactly this way. Angelica (Gina Gallego), Warner’s assistant, is first introduced in shadow, literally faceless. She’s nameless for much of the film, but as both Daniel and Warner learn how problematic their actions are, she isn’t allowed to become more visible. By the finale, the character has been all but forgotten, appearing in scenes for no reason other than to be part of the artistic composition of the frame.

The women of The Time Being exist only to provide supporting dialogue and reactions to the men, or to be thankful for moments when the complicated men learn important life lessons. When Daniel’s wife Olivia (Ahna O’Reilly) notes that she was essentially invisible in his life, it’s an empty observation, because the film treats the character as invisible, too. The barely hinted at lives of the film’s female characters are intriguing, yet end up as just so much wasted potential, the focus instead going to two guys who scowl a lot and treat people like props, who have no redeeming qualities except, perhaps, what they manage to produce on canvas.