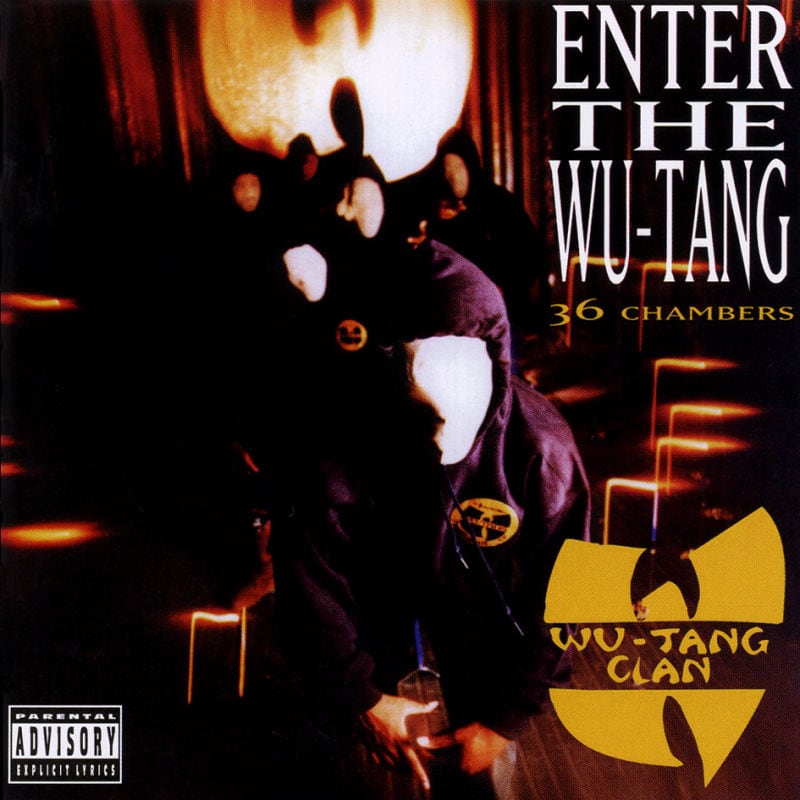 In January of 2013, the Wu-Tang Clan officially announced work on a new album, their first since 8 Diagrams. Although there has never been any dearth of Wu-related releases across the entirety of their career, what with solo albums, instrumentals, Wu-Affiliate Killa Bee albums and other assorted rap jetsam, it will be the first proper group effort since 2007. While it’s never been a good idea to take the comments of the contentious crew at face value (they’re more given to infighting than your average rap group), it seems extremely likely that the forthcoming A Better Tomorrow will be the Clan’s last album, the various members having grown too far apart to be as cohesive as they once were. And what better time, then, to look back at the album that started it all, 20 years ago?

Enter the Wu-Tang (36 Chambers) is a rare album in two ways. It is a debut album that sounds fully formed, as though it simply appeared from nowhere, ready to cause a ruckus. Of course, that’s merely good hype. The early label struggles of RZA and GZA are well documented (not least by themselves, particularly on the latter’s monumental diss “Labels”), not to mention the group’s mythos. But for those of us who didn’t grow up in New York City and were fortunate to be privy to its legendary hip hop scene, the nine members of Wu-Tang seemed to simply pop into existence with established personalities and styles, like Bizarro World superheroes complete with origin stories and an oblique language of self-invented slang. Viewing it in retrospect, it makes complete sense as a form of personal branding and as an extension of RZA’s paradigm shifting business acumen. While pop groups presenting manufactured personae for popular consumption is nothing new, dating back to the Beatles and the Monkees (at least most successfully) and would continue then and now, it had never been seen to the same sharply self-directed degree as immediately presented on Enter the Wu-Tang.

It’s no exaggeration to say that the album is specifically constructed to imprint its members’ personae on a listener. While the album contains narrative storytelling like “Can It Be All So Simple” and “C.R.E.A.M.” and star turns by its polar members Method Man and GZA in the former’s self-titled track and “Clan In da Front,” a huge amount of the album is devoted to impress upon one exactly who you are listening to. From the epochal opening challenge to all comers of “Bring da Ruckus” and the brutal rallying cry of “Wu-Tang Clan Ain’t Nuthing ta Fuck Wit,” Enter the Wu-Tang is designed to showcase its members. The inclusion of an extended snippet of interview in which Method and Raekwon break down their compatriots’ personalities into perverse sound bites alone demonstrates how focused RZA was to create maximum awareness of the product being presented.

And it’s not a diss to describe the music on Enter the Wu-Tang as product. RZA’s master scheme for the Clan was just as much a business plan as it was an artistic ethos, combining elements of corporate franchising with feudal dictatorship. For all that the album was clearly posited as the initial step to dominance in a hip hop marketplace that had increasingly marginalized its NYC roots in favor of West Coast G-Funk, it does not feel mercenary or manufactured. Almost unique in the history of popular music, the album presented the rawest, most unvarnished version of a genre and found itself being rewarded with immense popularity. While punk music conceptualized the same stripped down sound as an antidote to the overly-produced pop music of its time, it never achieved popular success in the way that Wu-Tang did with a sound that was just as aggressively opposite the dominant market appeal.

The other way in which Enter the Wu-Tang is such a rare album, particularly when seen through the lens of 20 years on, is how fresh it sounds while still being exactly of its place and time. The 12 tracks on the album are as primal and potent as they were in 1993, but could never be mistaken for anything that would be released today. In part, this has to do with the massive technological changes that have altered the music industry. While the album is a marvel of RZA’s old school approach to production, masterminded by single-minded focus and a massive vinyl collection, even the most underground, one-man hip hop releases these days tend to be the result of Pro Tools and digital distortion. And while the production level is the most gritty that RZA would ever oversee (largely by necessity, judging by the increasingly glossy sounds of Wu-Tang Forever and its larger budget), it’s easily matched by the other members of the crew. RZA himself would never again sound as aggressive as he does on his verses, while Ol’ Dirty Bastard would soon succumb to his own demons and lose some of the free associative energy that ties so much of the album together. Raekwon, perhaps the most prolific of the nine MCs, is the most eager to prove himself here, his first pairing with Ghostface Killah the seed of one of the most fruitful partnerships in rap history.

But while the unique brand of kung fu samples, comic book references, streetwise storytelling and gutter humor as spouted by the nine MCs is the message of the album, as always the medium is just as important. Enter the Wu-Tang sounds just as remarkable 20 years on, not because it belongs in the same world as Yeezus or even Ghostface’s brilliant Twelve Reasons to Die. It sounds brilliant because of the ferocity and simplicity of its contents, but also for the unparalleled architecture in its presentation, which gave listeners an ability to quickly sink into an abrasive, theoretically unwelcoming world. It’s as much a bill of sale as it is an album, and it’s all the more for that.