September 23, 2020
Home Music The Microphones: It Was Hot, We Stayed in the Water (Reissue) 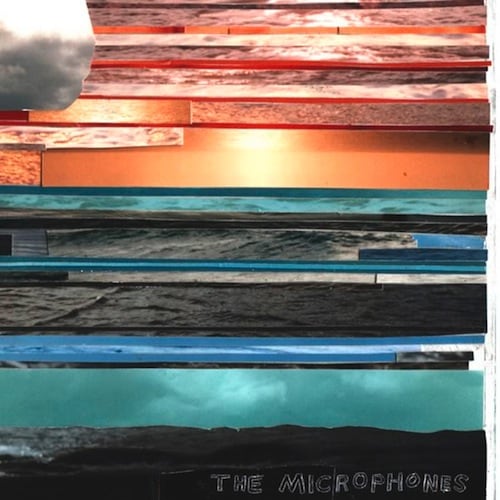 [xrr rating=4.0/5]As if Washington’s native noise-folk son weren’t admirably prolific already, now resurfacing is a characteristically ephemeral Microphones release from more than a decade ago (their progenitor, Phil Elverum, currently styled Mount Eerie) – 2000’s It Was Hot, We Stayed in the Water. Last year saw the staggered issue of the “Clear Moon/Ocean Roar” duo of LPs, and this fall yields the next Mount Eerie release, Pre-Human Ideas. The comparatively understated second Microphones LP It Was Hot was given little chance to sit with listeners in 2000 before it was followed by the cacophonic, seminal The Glow, Pt. 2 a year later. The immediate attention drawn by a better known sibling, an absolute cataclysm of a record that still receives solid comparison to the best in lo-fi and rock’s noisome fringes (and at times hangs like a cloud over the rest of the Elverum catalog), leapfrogged any enthusiasm lingering around It Was Hot. Shuffled among the still vigorously growing Microphones/Mount Eerie catalog, it remains largely overlooked. Up until now, that is. The re-release of It Was Hot in 2013 represents the third recent effort to resurrect stellar early Microphones material on vinyl. (2003 Microphones LP and namesake for the later Elverum moniker Mount Eerie’s vinyl reissue is around the corner – August 20.)

The resurrection of It Was Hot} is a faithful one – to be expected, as Elverum himself is responsible for putting out the reissue. Fully preserved is every nuance and niche set to tape by him for the record. And things like the fragile-voiced pop of “Sand (Eric’s Trip)” alone make the revisit worth it. Elverum’s hazardly ventured verses (“I know I am weak/ I know that I’m sad”) are captured again like voices from far upwind for the sandy-haired “Something.” “Deafened by the sound of foggy waves,” Elverum’s reedy timbre comes haltingly out in “foggy breath.” A howling wind, blasts and crashes of cymbal, buzz and reverb grind and unfold pleasurably in the track’s back end nooks. “Ice” further embodies a lighter end of It Was Hot, with resonance and hop prefiguring The Glow, Pt. 2’s gentler leanings, soundscapes which still occasionally surface as on recent Mount Eerie cuts “Ocean Roar” and “Through The Trees pt. 2.” Then to complete the mood there’s the too-brief, vaguely psychedelic respite in “The Pull” (“Nobody noticed my misty escape/ And I ended up floating like water in the air”).

Despite what the name sequencing would suggest, “The Glow” is in most ways dwarfed by the full force of its successor, LP The Glow, Pt. 2, even standing at 11 minutes. The 20-track cycle Elverum pushed out the following year, which expanded upon the overall promise contained in It Was Hot – up to and including “The Glow” – was at its core a cut-up of fleeting moods and landscapes, save for equally lengthy closer “My Warm Blood.” It’s a fair corollary to “The Glow” in size but not shape. The latter hovers closer at its start to the fragile, beach pop harmonies of some of The Glow, Pt. 2’s wistful departures, such as “I’ll Not Contain You” and the gentle perfection of “I Felt Your Shape.” Misleadingly, the first impulse in “My Warm Blood” is similarly in the direction of stripped down strum, with Elverum’s whisper-sing at the delicate center and effervescent samples of “I Want the Wind to Blow” (another The Glow, Pt. 2 track) drifting in and out amid bellowing, echoing tones like ships’ horns in a foggy bay. That’s largely where the comparisons with “The Glow” end. While “My Warm Blood” peddles timidity as the conclusion to the The Glow, Pt. 2 tumult, the back half of “The Glow” nibbles at riffs and noisy jams reminiscent of Yo La Tengo’s headier space-outs or Neutral Milk Hotel’s On Avery Island. Then quiescent pulses of organ and bursts of running water finish out It Was Hot’s miniature epic. Unsurprisingly, in that sense “The Glow” is not a far, plaintive cry from the ragged edges of The Glow, Pt. 2’s title track. The basic thrust of both, and the direction of Elverum’s energies in the mix on both “The Glow” and the album that built on it the following year, is toward crashing, disastrous ends.

This is no less true on It Was Hot’s “Organs,” where multi-tracked, deep throated tones on keys build to almost overwhelming volumes while a thick snake of electric feedback snarls itself around the monolithic chorus. Its summary cut to silence and the end of the record also feels an indelible part of the experience by the time the rest of it has been endured. But like with “The Glow,” the trend is toward dismantling things. A breeze adorns the opening moments of It Was Hot on “The Pull.” The track in moments teeters like someone accidentally leaning too far for their own comfort over the railing of a pier, snaps back in background sighs and fluid acoustic, but then catapults over the railing in cascades of incendiary fuzz. The calm/storm paradigm is further chased after centerpiece “The Glow,” especially with the brief invocation of standard “Blue Moon” leading into the ‘50s bop Elverum effortlessly conjures on “Karl Blau.” This track, which expires within the two minute mark, is matched with the literal “Drums” – a song whose explosive stereo fury sounds imaginably close to the percussive track for the Clear Moon/Ocean Roar (condensed versions) experiment. Then “The Gleam” buzzes in indolent alt-rock gutters like a lost cassette B-side prior to transitioning to short lived choral blooms.

An Elverum LP that thrives on chaos, quiet and in juxtaposing the two? That was hardly novel in It Was Hot’s time. And also nothing, judging by the course set by recent Mount Eerie records Ocean Roar and Clear Moon, likely to change anytime soon about the overall Elverum discography. But it’s fantastic to see It Was Hot, We Stayed in the Water, particularly in the format of a vinyl/digital download combo, refreshed and hauled out for another errant drift down its many jetties and rapids.