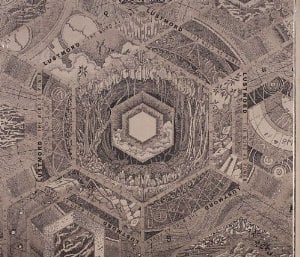 [xrr rating=4.0/5]Stalker, Lustmord’s 1995 tribute to Andrei Tarkovsky’s movie of the same name, mirrors the film’s journey into the darker parts of the human psyche complete with tangible landmarks and scenic landscapes. Listening to Stalker is very much like visiting and exploring a place, both imaginary and corporeal. But, as a Lustmord record, the key to Stalker is its collaborative nature, here with Robert Rich. While 1994’s The Place Where the Black Stars Hang is 80 minutes of pitch subterranean blackness, moving with the weight and scale of cosmic, primordial architecture, Stalker is a sigh of relief by comparison – a coming down to earth. Rich’s presence added some much needed light and life to Lustmord’s burnt tectonic designs. The pleasures of much of Lustmord’s solo work are subconscious, allusive and featureless, the artist searching out the depths of lizard-brained recognition, where Stalker is something you can almost touch.

Lustmord’s latest, The Word as Power, is the Englishman’s first outing with vocal accompaniment. The concept is tantalizing and the execution is stunning. The vocals gracefully add that tangible dimension and it grounds what is otherwise an extremely Lustmord-ian Lustmord album. It also arrives by way of British experimental label Blackest Ever Black, which, alongside other recent blackened, industrial-toned releases from the likes of Prurient and Raime, is a perfect fit for Williams. The goal of The Word as Power’s use of vocals isn’t simply for novelty’s sake, though they do offer that to a certain degree.

Lustmord is asking many of the same questions he has for most of his career, exploring realms beyond human comprehension that only the metaphysical venue of ambient music can reach. Only now he’s literalizing those questions to some degree, exploring “that which exists beyond the reach of language” by using the human voice as a tool. It’s undogmatic ritual music, as the album puts it, primed for transcendence. The stable of vocal collaborators Lustmord has assembled include ex-Swans vocalist Jarboe, Aina Skinnes Olsen, Maynard James Keenan of Tool fame, and Tuvan throat singer Soriah. It’s easy enough to imagine Lustmord doing his thing while each player just improvises over it, but there’s a meticulousness to the music here and it’s obvious Williams’ mixture of sub-bass rumbles, thickened drones and distant field recordings are very conscious of the vocals and vice versa – in regard to both the structure and intensity of these tracks.

The 14-minute, Soriah-featuring “Grigori” is especially purposeful. Soriah’s singing technique is such that it requires the least amount of treatment where the rest of the album doles out healthy helpings of reverb. Lustmord is careful with silence and volume throughout “Grigori,” letting the vocalist take point most of the way, but the vocals themselves highlight the changes in the soundscape at their back. It’s emblematic of the whole record, but “Grigori” might be a highpoint. Halfway through the track, everything falls still only for Soriah’s vibrating vocals to return two-fold. The moment almost qualifies as climatic.

Opener, “Babel” plays like a flattened Dead Can Dance, Olsen’s voice rolling like gusts of wind across a desolate, ravaged plane, distant volcanic booms emanating from far below. The track is equal parts terror and wonder, a toothy-drone building beneath a tumultuous chorus of Olsen’s voice until the whole world is filled with spectral sound and smothered earthen noise. Jarboe takes over for Olsen on “Goetia,” the music plunging immediately into candlelit darkness before going widescreen again on the 17-minute mechanical behemoth, “Chorazin.”

The Word as Power is full of mystery and awe. It’s music that attempts to chart cosmic distances like much of Lustmord’s work, but the inclusion of vocals offers an immediate, human smallness that’s never really been a part of the British artist’s output. It’s no surprise though, that that smallness is almost immediately transcended, pointing toward something vast and unspeakable. Lustmord generates whole worlds with his music, immersive and infinite, and The Word as Power is no exception.