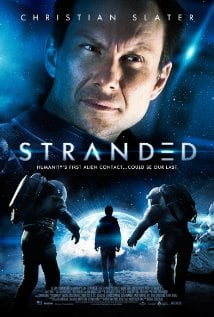 [xrr rating=1.25/5]Minimum word counts so rarely prove a hindrance: even the most mediocre films have enough in them to support a baseline level of discussion. Stranded may prove to best me in this respect, however, as a search through several thesauri has yielded far too few synonyms for the word “murky” to adequately pad out and describe the film’s aesthetic sensibility. Set on an already-nondescript US government moonbase, Stranded finds an excuse to cut that base’s power within the first few minutes, plunging the station into darkness in a move to create tension for its resultant alien horror. But the splotchy, dim emptiness of the frames that follow do not set a tone of eerie entrapment so much as they resemble a high school production of Alien filmed by a parent who forgot to take the cap off the lens.

Stranded’s base personnel are an assortment of faceless actors culled from network television and basic cable. Their leader, by virtue of having been, improbably, a star at some point, is Christian Slater, whose Col. Brauchman warns of carbon dioxide build-up as oxygen levels fail in a tone so flat that it suggests the air is already being cut off from his brain. As further evidence of his slipping mental faculties, Brauchman repeatedly refers to carbon dioxide as carbon monoxide.

As if Brauchman’s crew did not have enough on their hands with a commander unfamiliar with the difference between gaseous compounds, soon they find themselves forced to contend with the alien that hitched a ride on a recently crashed meteor. Ava (Amy Matysio) cuts her finger while handling a sample of the spore-ridden meteorite and soon becomes pregnant, which leads one to the uncomfortable inference that the filmmakers are ripping off not Alien but Prometheus, which is like ripping off Carnosaur instead of Jurassic Park. The rest of the crew notices Ava’s rapidly ballooning stomach, but her terror at seeing the alien spawn is casually dismissed as a hallucination brought on from exposure to carbon gases of ambiguously numbered oxygen bonds.

Stranded is so dim that it took me a while to realize the film is presented in a ‘Scope aspect ratio, perhaps as an aesthetic nod to John Carpenter, whose The Thing becomes the dominant reference point of the film’s second half. Would that the use of Carpenter’s aspect ratio have contained any of the signs of Carpenter’s skill: where The Thing used its wide frame to draw in the sense of isolation, of the cramped borders that provided small shelter from the outside tundra and yet no safety from the monster within, Stranded has no sense of place or relation. I’ve long considered jump scares to be the cheapest and easiest way to thrill an audience, but the telegraphed and clumsily executed jolts here prove jumps are not as easy as they seem.

This film debuts straight to video, which is not necessarily the sign of bad quality such a designation connotes, but if it did happen to play in a theater an audience might justifiably believe that the picture had gone out and the sound was from the next screen over. One cannot even say this marks a low point for director Roger Christian, for the man also directed Battlefield Earth. That the latter still seems so much worse than Stranded implies one of two things: that Battlefield Earth is still so resonantly awful than anything looks good in comparison, or that the likes of Stranded may be the best Christian can do. If that’s the case, maybe it’s a blessing 80 percent of this movie is not visible.