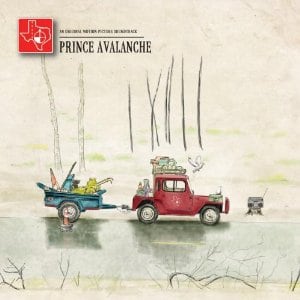 [xrr rating=3.75/5]The typical Explosions in the Sky song is a journey. Each track seems like one of those simulated rides where you fly over the landscape, occasionally skimming gentle streams or brushing up against a mountain before the bottom drops out and you’re freefalling off a cliff. There’s no straight line, and even though so much happens, it often feels like nothing is happening. It’s as if you can drop in at any point and still catch some of the story.

Which is exactly what makes them so perfect for TV and film. Instrumentals of soaring crescendos that build from ash provide ample opportunity to illustrate drama, serenity, sadness and hope, often within the same tune. As such, they’re now almost as associated with “Friday Night Lights” as Texas high school football, and their latest score for David Gordon Green’s Prince Avalanche will likely make them even more in demand in Hollywood.

Prince Avalanche marks a sharp and welcome turn for Explosions in the Sky. Subtlety and restraint are words never before associated with the band, but here they craft delicate, mostly down-tempo sound clouds that are a hell of a lot closer to classical music than post-rock. These songs feel stationary, and are clearly intended to capture a singular moment, as opposed to exposing you to many of them. Each note has a clear and distinct purpose, combining acoustic and piano instrumentation with the occasional flourish of brass and woodwind.

Soundtrack vet David Wingo joins Explosions here, and he might just be the difference maker. He’s scored a handful of Green’s films, and is the most obvious catalyst for propelling the band deep inside an offbeat script about the relationship between two men painting highway lines in the middle of nowhere. Rainy piano droplets erratically hover above intricate nylon-stringed guitar arpeggios during the film’s main theme, instrumentation that forms the basis for many of the record’s best tracks. If you came for sprawling electric guitar jams, this is not the place.

“Hello, Is This Your House?” is a surefire highlight, as single piano notes are pulled out one by one as a classical guitar is plucked until both instruments meet in harmony on top of a rhythm that sounds like a distant cousin to Wilco’s “How to Fight Loneliness.” Though the effectiveness here revolves more around pace than texture, little flourishes make things real interesting, especially during the drifting woodwind of “Dear Madison” and the beautiful “Dear Alvin.” These moody sketches are littered with tension, which seems to be released during the record’s two more uptempo tracks: the steady pendulum of “Alone Time” and the triumphant closer, “Send Off.” There are a few brief moments (“The Lines On The Road That Lead You Back Home,” “Join Me On My Avalanche”) where the familiar Explosions in the Sky sound vaguely appears, but in the context of the soundtrack these moments feel out of place.

Prior to Prince Avalanche’s release, it has already been announced that Explosions in the Sky and David Wingo will be scoring David Gordon Green’s next film, Manglehorn, which happens to star none other than Al Pacino. It might seem as if they’re being pigeonholed to a format, but if Prince Avalanche proves anything, it’s that they can walk into a familiar format and unexpectedly morph into whatever the script calls for. They’re like actors in that sense, playing different characters along the way beneath the guise of a musical mask. For this band from Texas, that’s quite a Hollywood story.