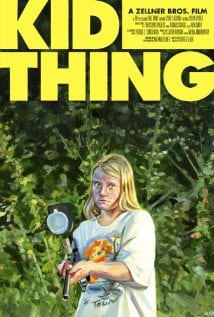 [xrr rating=2.75/5]Though maybe it shouldn’t be, it remains pretty nervy to build an entire film around a thoroughly unlikable protagonist. Make that protagonist a little girl—golden-haired, freckle-faced and with enough baby fat on her that her scowling face is shaped roughly like a thumbprint—and the necessary nerve increases exponentially. So, we need to talk about Annie (Sydney Aguirre), the lead character in David Zellner’s Kid-Thing. Perhaps the film’s most emblematic moment, the act of pointless cruelty so pronounced that its downright comical, comes when Annie is face-to-face with a young girl in a wheelchair who’s been waiting alone outside her home for her parents to return to the saddest birthday party in the history of humanity. Without a word, Annie demolishes the birthday cake with a sledgehammer swing of her aluminum baseball bat before stealing one of the girl’s presents, reducing the outlay of gifts by 50 percent. This isn’t the worst thing Annie does, not by a long shot.

Zellner’s slender movie is a procession of misery, as Annie destroys everything she encounters, whether that means blandly knocking piles of books and toys off a closet shelf or shredding off the rotting wood of a felled tree in the nearby forest. She lives with her father, Marvin (Nathan Zellner, also the producer and cinematographer), who’s so oblivious to her needs, activities and very existence that he doesn’t know she’s on a soccer team until her hears an answering machine message warning that she’s one more red card away from being cut from the squad. Shot in Texas, the film is filled with downtrodden, crumple-souled individuals, going about tired, uneventful lives. It’s packed with details that emphasize Annie’s ill surroundings: scratch-off lottery tickets, camo pants, broken-down equipment and many other symbols of dirtbag kitsch. It’s not hard to discern where Annie’s disagreeable nature comes from. She’s a dejected, lonely little girl acting out in an emotional void.

After an extended stretch establishes the mood—which Zellner creates with an aching patience—the plot emerges when Annie discovers an open shaft in the woods, probably no more than three feet by three feet, a black square leading to unseen depths. From the bottom of the abandoned well come the cries of Esther (Susan Tyrrell), an elderly woman who says that she fell in days earlier. She begs Annie to go get help from an adult, but the best the girl will do is drop down homemade PB&Js and shoplifted Capri Suns. As time passes, Esther grows more desperate and angry with Annie, but the girl is determined to help only on her own terms. She’s also scared by the situation, occasionally accusing Esther, with a child’s honest fearfulness, of being the devil trying to trick her.

Kid-Thing is an interesting enough mood piece, but it’s sometimes too understated and monotone for its own good. Aguirre performs admirably as Annie, but other characters are mere ciphers, present either as set dressing or opportunities for easy mockery. Too much of the film doesn’t quite lock into place. Even Tyrell, long an intriguing force of nature who has utterly bamboozled Hollywood, occasionally missteps in her voicework as the trapped Esther, pushing her rage to a place that seems more suited to a howling villain in one of Sam Raimi’s cartoonishly vivid horror flicks. The issues aren’t disastrous, but they significantly undercut what works well in the film, especially the heartbreaking portrait of Annie. The character may be unappealing in her temperament, but that’s what makes her fascinating, all the way to the stark, strangely lovely final shot.