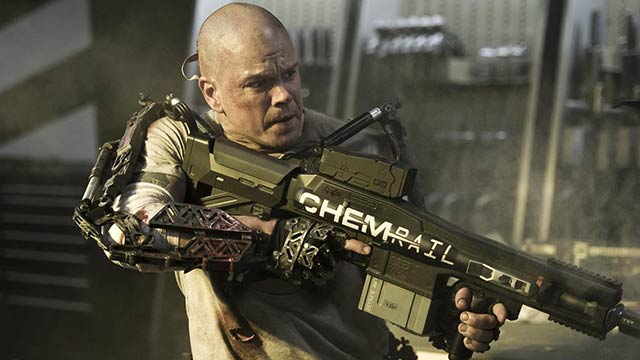 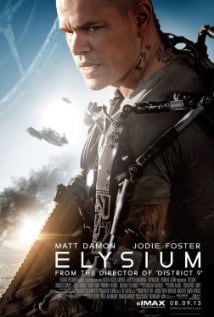 Quick, tell me which science fiction film I’m describing: it’s the not-too-distant future. Human beings have destroyed the Earth and only an elite few have access to all the wealth. The teeming multitudes want the same rights, but repressive resistance from the rich keeps them at bay. I could be describing the plot to many films, including Neill Blomkamp’s debut feature District 9. But I’m not. I’m describing the basis of Blomkamp’s sophomore film, Elysium.

“Elysium” refers to a spaceship colony that hovers over the Earth. It’s the 22nd century and the rich have fled the planet to preserve their “way of life.” Not only do they live in mansions and luxuriate in pools, drinking champagne, they also now have eternal life thanks to advances in technology. Meanwhile, Earth has become a battlefield where the poor dream of escaping to Elysium but spend their drudging lives working for a pittance for the corporations manned by the folks drifting nearby in space.

After an extended prologue, we meet Max (Matt Damon) a paroled car thief who is trying to make an honest living in a factory. Before long, Max is involved in a horrible accident and given only a few days to live. Desperate for a cure, he falls back in with his old crowd, agreeing to take on a dangerous assignment in exchange for passage to Elysium. However, in order to successfully complete the job, Max is fitted with an external robot suit that gives him tremendous powers.

Just like with District 9, Blomkamp has created a bloody parable about what happens when people are suppressed for too long. Even though he throws in a plot where an evil politician (Jodie Foster) tries to overthrow the current president, Blomkamp’s script is more concerned with the people stuck down on Earth. We learn it has always been Max’s dream to escape to Elysium, a not-so-veiled metaphor for our own elusive American Dream. We can’t exactly call Blomkamp the most subtle of filmmakers, at least not after his first two films. While District 9 tackles South African apartheid, Elysium comments on the discrimination Mexicans face here in the United States. Unfortunately, some extreme overacting from supporting characters and the wafer-thin characterizations of the villains undermine any sort of gravitas Blomkamp hoped to achieve.

There is one villain who breaks out of the mold, however. Kruger (Sharlto Copley) is a bounty hunter out to put one serious dent in Max’s ambitions to go to Elysium. Copley plays Kruger like Warren Ellis at his most deranged, or maybe just playing a Dirty Three concert; he’s one of the brashest villains to hit the screen since the ’80s, and easily overshadows Foster and her cronies.

Elysium starts out well, but Max’s quest for a cure soon becomes secondary to helping a little girl with leukemia. Blomkamp keeps the film flowing and the action coming, but this sudden injection of schmaltz threatens to derail the tough science fiction that unspooled for us during the film’s first hour. Max’s fight becomes more than a selfish one and frankly this addition feels like a cop-out. Blomkamp definitely hankers to follow in the footsteps of Paul Verhoeven, John Carpenter and David Cronenberg. Who he should really take a lesson from is his own creation, Kruger: for his next film, ditch the touchy feely shit and take no prisoners.