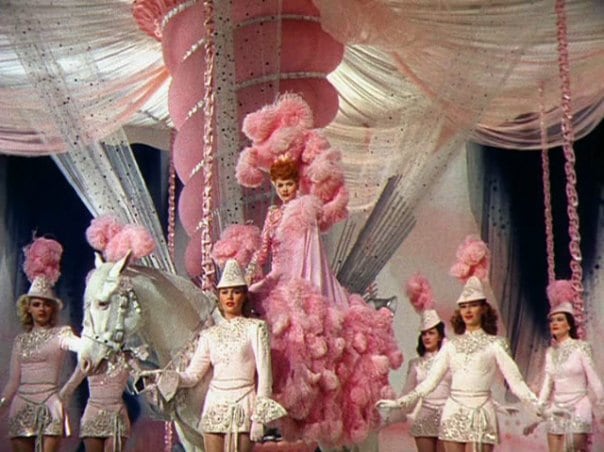 Fans of the George and Ira Gershwin songbook may not be familiar with the song “The Babbitt and the Bromide.” The forgotten number was originally a Broadway showcase for Fred Astaire and the woman considered his best dancing partner, his sister Adele. The song was revived, if that’s the word, for the MGM spectacular Ziegfeld Follies, begun in 1944 but not released until two years later. The routine was the only onscreen collaboration between two iconic dancers: Astaire and Gene Kelly. But despite typically great production design from MGM’s Freed Unit, the routine falls flat. The choreography is uninspiring, and doesn’t play to either dancer’s strengths. And you’ve never heard of this dreary song for good reason: it has none of the melodic or lyrical grace and wit of the Gershwin standards passed on from our forefathers. With all that legendary talent assembled, the bit does not quite work as comedy, dance or cinema. Sadly, this is typical of Vincente Minnelli’s Ziegfeld Follies, which takes some of Hollywood’s grandest silk purses and makes a bunch of sow’s ears.

Ziegfeld Follies was a box office success at the time, with wall-to-wall stars in a big screen variety show meant to evoke the grand showmanship of Broadway producer Florenz Ziegfeld. William Powell reprises his role from the 1938 version of Ziegfeld Follies, the grey-haired patriarch watching over then-contemporary stars from a cloudy perch in the celestial firmament. It was a natural assignment for Minnelli, but it was also the kind of assignment that supports claims that the director was all style over substance.

MGM producer Freed had a reputation for taking the best Broadway talent and giving them free rein in Hollywood. Minnelli flourished in what was known as the Freed Unit, which led to some of his best-loved films, like Meet Me In St. Louis. The day after shooting wrapped on that picture, Minnelli got the assignment to take over Ziegfeld Follies from George Sidney.

Several of Sidney’s numbers remain in the movie, including the eye-popping production number, “Here’s to the Girls,” a showcase for Astaire and Lucille Ball, whose expression at one point looks like a bitter cry for an agent who knew what to do with her looks and talent. If there’s any coherence in Ziegfeld Follies at all, it’s thanks to the production standards of the Freed Unit. But this was a case where all-star talent didn’t all add up. 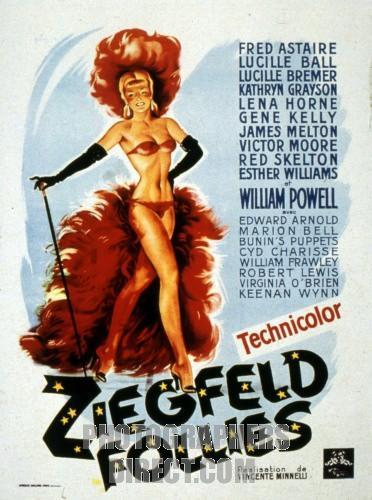 Most of the sets and cinematography are stunning. In a climate where Grown Ups 2 tops the box office, you can appreciate the success of this inconsequential candy box. Who would not ooh and ahh over the colors and extravagance on screen when viewed in cavernous movie palaces whose silver screens rose 40 feet and higher? But the best talent can’t save second-rate songs, and even the great Astaire ends up phoning in a performance.

“The Babbitt and the Bromide” may have been a failure, but it was an up-tempo number suitable to the talents, if not styles, of two great dancers. Astaire’s two numbers with Lucille Bremer are another matter.

Bremer was a liability in Minnelli’s Yolanda and the Thief. She was reportedly hired because producer Arthur Freed longed for talents she could not legally display onscreen. In the elegant “This Heart of Mine,” Astaire can clearly be seen guiding the less accomplished Bremer, practically pushing her out of his way at one point. The gorgeous set design is like a Technicolor Joseph Cornell box made into a musical. Jewel thief Astaire stands outside a fancy ball, looking fondly through French doors at all the potential baubles just out of reach. This kind of sumptuous alienation was a specialty for Minnelli. Astaire works his way into the ball and singles out Bremer for her magnificent jewels. Minnelli seems aware of Bremer’s lackluster toes, placing her on a moving platform that gives her the artificial appearance of gliding, an effect that that fans of Jacques Tati and Spike Lee will recognize. Bremer needed the help, but the slow tempo of the number, combined with the production design and the typically elegant Astaire, at least makes this segment watchable.

The sluggish “Limehouse Blues” is less successful. Again, it looks impressive, set in a grimy London Chinatown that explodes into a Technicolor nightmare of Chinoiserie. Astaire is plastered in slant-eyed makeup, but that is the least of the indignities. Of the team Bremer and Astaire, whom do you want to see most? Freed begged to differ, and Bremer spends much of the routine blocking Astaire from the camera. This number seems slowed down to accommodate Bremer’s weak chops, and there comes a point in this nightmare sequence where you can see Astaire just give up.

Minnelli is credited with two more production numbers in Ziegfeld Follies. They do not get any better. “A Great Lady Has an Interview” was intended for Greer Garson, but went instead to Judy Garland, who at the time of shooting had just ended her relationship with the director. The breakup would not last, but the musical number, with Garland in an embarrassing send-up of Hollywood arrogance, lasts too long. Since the routine was meant for Garson, Garland does not even sing.

The Follies close on a Kathryn Grayson showcase called “There’s Beauty Ev’rywhere,” a fantasia that manages to out-kitsch all that went before it. It’s kind of awesome, but it’s too little too late. They don’t make them like Ziegfeld Follies anymore. Those who long for the days of Hollywood stagecraft may find visual pleasures in its candy-colored images, but here’s proof that glitter did not always equal gold.