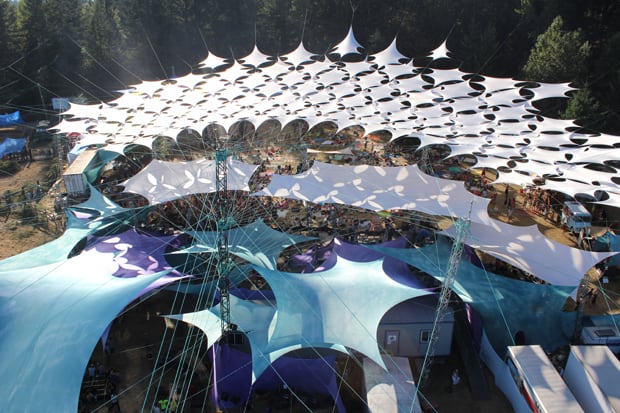 Portland, Oregon’s 15th annual Pickathon Indie Roots Musical Festival unofficially kicked off Thursday, August 1st. This year’s early opening was overcast with an accent of light showers. Compared to the pervasive 90-degree heat opening 2012’s festivities, the cloudiness was a serious relief to campers, staff and volunteers trying to stake out spots for the weekend of good music, local food and craft beer. Catching the smattering of early arrival festivities, including sets on the Café stage and during the late night in the Galaxy Barn (pictured above) were made much more manageable by the mild temperatures.

Catching Vieux Farka Touré on the Wood Stage early Friday evening was a distinct pleasure. The Malian vocalist-guitarist, making a Pickathon 2013 appearance off the back of a last minute 2012 cancellation, led his minimalistic backing band through most of The Secret amid epic staging in the Pendarvis Farm forest. Compared to the previous year’s Bombino, meant to replace him, his elegant, overabundant picking style, reminiscent of his late father’s, eagerly filled the shoes he inadvertently left unfilled the year before.

Yellowbirds performed their punchiest of the weekend’s sets early Saturday in the Galaxy Barn. Onto a packed-tight crowd they unleashed the fury of their nervy indie rock noodling and ever present charm.

Saturday’s Gospel/soul outfit the Relatives were among the earliest acts to bring the audience in the main stage area to their feet. In a raucous set, they electrified the early afternoon crowd eagerly awaiting King Tuff, Lady and Vieux Farka Touré on the Fir Meadows and Mountain View stages. 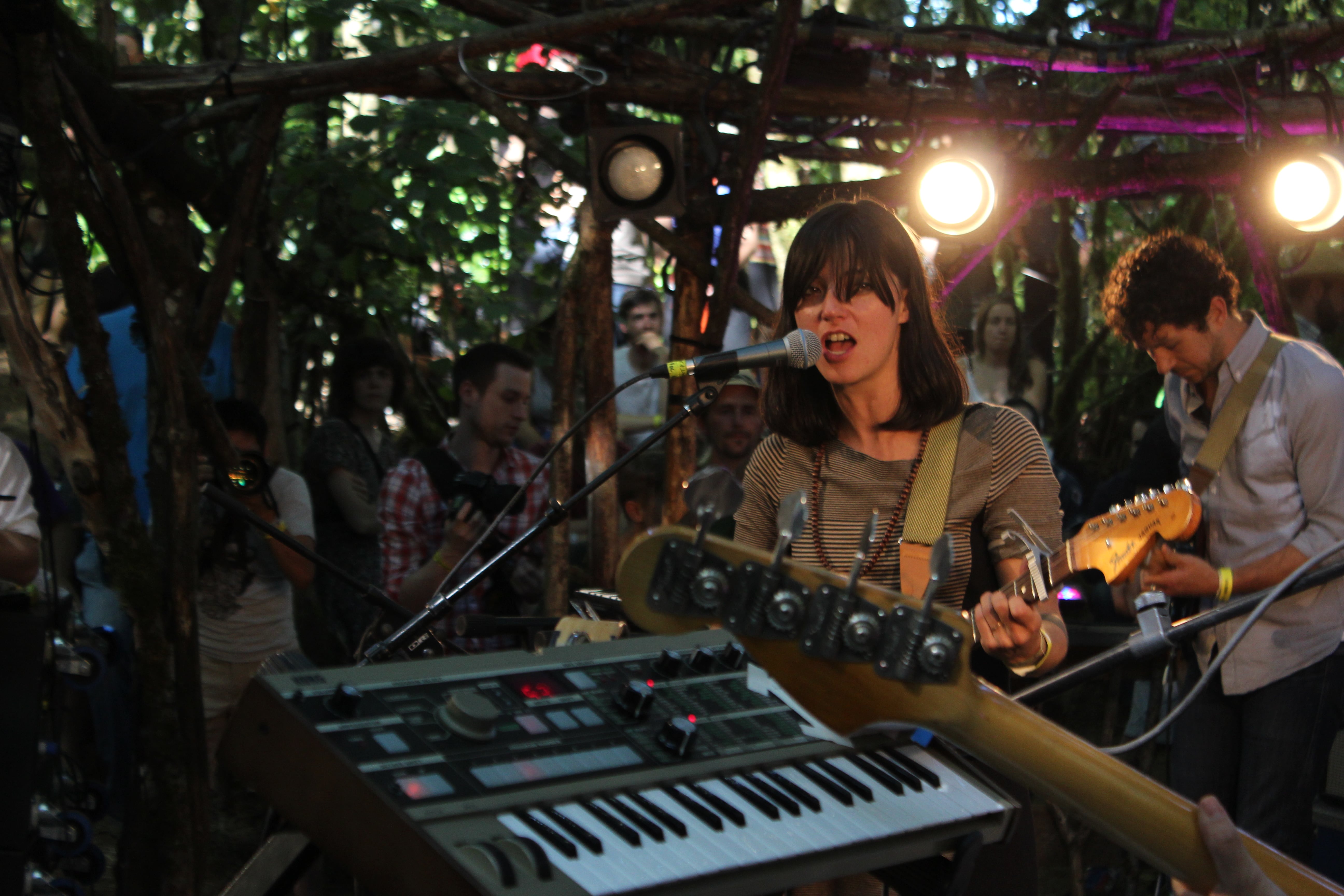 The tail end of Sharon Van Etten’s 18-month Tramp tour happened to land on the Pickathon weekend. Her stellar 2012 LP, figuring high in critics’ and fans’ end of year lists, was rendered all the more raw and powerful by her well honed backing band, with whom Pickathon’s were the last two shows. Overcoming sound difficulties and itinerant awkwardness on the Wood stage, Van Etten, drummer Zeke Hutchins, guitarist Doug Keith and basisst/keyboardist Heather Woods-Broderick powered through the hardest hitting Tramp ballads including “In Line,” “I’m Wrong” and even Epic’s “Don’t Do It.” Their powerful, emotional renditions were among the festival’s highlights.

The Spoon/Wolf Parade/Handsome Furs mashup supergroup Divine Fits was tasked with closing both of Pickathon’s latter two nights. While the show Sunday in the Galaxy Barn was unsurprisingly packed, Saturday’s set on the main stages gave the band’s Britt Daniels and Dan Boeckner an opportunity to accentuate their respective styles. Everything from A Thing Called Divine Fits from the Handsome Furs-esque “My Love is Real” to the dreamy Daniels-centric “Salton Sea” to the lackluster “Civilian Stripes” was wheeled out. Even a cover of Tom Petty’s “You Got Lucky” made it in, to significant audience appreciation. 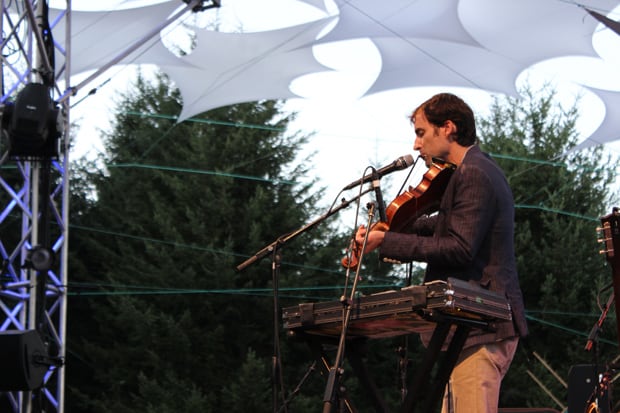 Making dual appearances consecutive nights on both the Wood and Mountain View stages Friday and Saturday evenings, neither of Andrew Bird’s performances disappointed. Each had a distinct feel; in the woods he played up the intimate, close-quarters nature of the given venue – and listeners packed in as close as humanly possible. On the main stage the sound was more buoyant, expansive and the set selections mirrored that.

Pickathon’s resident architects, Guildworks, certainly went over the top with this year’s set up. Fittingly, artisans for the organization asked media photographers if they’d be interested in going up on the giant 80’ booms they use to assemble the festival’s elegant shade structures and venue wraps. The view from so far up affords a perspective on the festivities that’s simply unmatched. 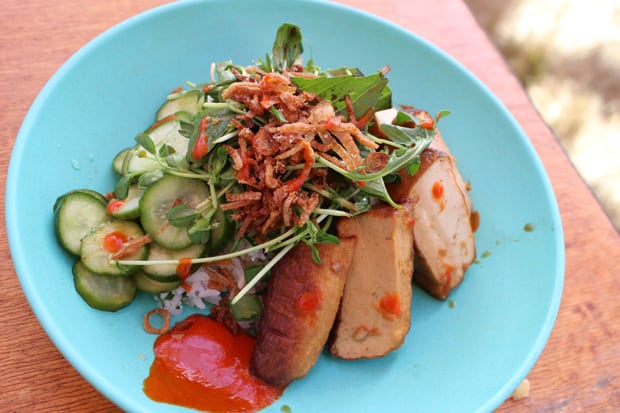 The food at Pickathon, as in previous years, was a serious draw. This year the festival’s organizers clearly went an extra mile with the offerings. 2013 saw a doubling of the festival’s vegan and vegetarian offerings, as well as the opening of a new food stand anchor over in the Pickathon Café. Portland mainstays such as Pine State Biscuits, Thai Noon and Bunk Sandwiches were joined by Boke Bowl (whose tofu Breakfast Bowl is pictured above), Bend’s The Grove burrito stand and Eugene’s Viva Vegetarian.

New Jersey’s Marco Benevento were a surprise, late night Sunday delight. The three piece outfit closed out the Wood stage into early Monday morning with a frenetic, jammy set to a severely limited crowd eager for dancing on hay bales (and averse to Feist’s main stage show). Following the high energy brought to bear in support of their Tiger Face, attendees either huddled into the Galaxy Barn to catch Lady and Divine Fits or retreated to the tents they’d called home the last three days (like the set up in our camp, “The Citadel,” on the ridge) in preparation for the return trip the next day.