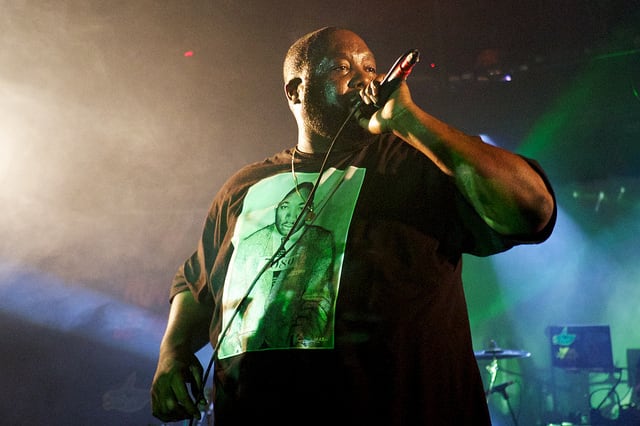 When we imagine the private lives of rappers we think of bouncing cars with golden rims, wads of cash spread out like discarded fast food detritus and girls oozing sexuality, equipped with thongs, busting out all over the place. Although the excess of the rap game may have ebbed in recent years, we need to look away from mainstream hip hop for a more realistic picture.

Case in point: as I approached the Hawthorne Theatre for El-P and Killer Mike’s Run the Jewels tour, I passed by the tour bus parked out back. There were no members of the El-Producto posse milling about outside. Instead, El-P (aka Jaime Meline) sat next to the bus in a lawn chair, reading a book. Next to him, someone grilled some hot dogs over a makeshift fire pit. This is how these guys roll. Forget the gold chains they show off during the performance. This is straight up real shit.

The concert was a sampler for fans of all iterations. Following the openers, Killer Mike did his own set, then El-P and then finally a double dose of Run the Jewels, which featured both MCs together. Riding the wave of last year’s R.A.P. Music, Killer Mike turned a powerful set in front of a packed house of enthusiastic fans who jumped up and down, pumped their fists and spit Mike’s lyrics back him. “Big Beast” rumbled like a chugging juggernaut, “Southern Fried” resurrected the ghosts of OutKast and “Reagan” was a venomous memento mori to our ex-Commander in Chief. Mike, clearly moved by the crowd’s enthusiastic response, used his articulate interstitial monologues to advocate a libertarian bent, imploring us to prevent police intimidation and live how we want.

After Mike’s killer set, El-P took the stage for a blast of heavier rap. Though not as rousing as Mike’s music, El-P’s material is harder hitting, from “The Full Retard” to “Drones Over Bklyn,” creating a sound somewhere between hip hop and hard rock. Backed by a three-piece band, El-P’s songs pushed the sweaty crowd into paroxysms of hard rock ecstasy and soon people were crowd surfing. The Hawthorne typically has poor ventilation and as the crowd’s furor increased, the hotter the club became.

Then Killer Mike returned and out came the 36-inch gold chains, the heavy symbols from the duo’s Run the Jewels record they released for free earlier this summer. While the new songs haven’t had the same time to permeate and circulate as the ones from El-P and Killer Mike’s records from last year, the audience still responded, singing along to “Sea Legs” and pumping their fists to “Banana Clipper.” The two rappers obviously share a strong mutual respect and together they lit up the stage with bumping new beats. While many other hip hop artists get bogged down in bullshit like slathered-on production, materialistic desire and overeager entourages, El-P and Killer Mike kick that shit to the curb. These guys could be the best in the game right now. It’s amazing they don’t sell out stadiums.