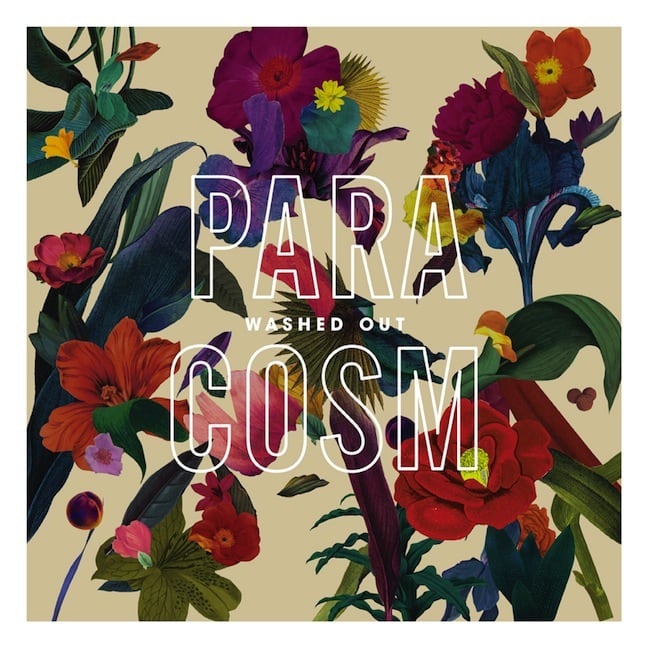 [xrr rating=4.0/5]After the obligatory sonic throat-clearing of “Entrance,” Paracosm, the new album from Washed Out, goes straight into “It All Feels Right,” which approaches chillwave self-parody, at least initially. There’s a burble of twinkly tones, a beat like the samba demo on a Casio turned to its slowest setting and even a brief hint of something that sounds like a sampled birdsong. Then, about 25 seconds in, the song opens up, the slow beat punctuated by like flares of drum machine hits and a lush melody asserting itself. It goes from yet another invitation to turn up the headphones and close out the world, the music equivalent of a sensory deprivation tank, to something far richer and more interesting, recalling a less anxious busy version of a Flaming Lips song. Ernest Greene seemingly acknowledges the departure, singing, “Leaving heading eastbound/ Weekend’s almost here now/ It’s getting warmer outside/ It all feels right.”

Greene’s debut full-length using the Washed Out name, Within and Without (2011), was one of those internet sensations that actually translated all the digital excitement to real world success. Bolstered by preceding EPs that were very well-received and the high-profile adoption of “Feel It All Around” as the opening theme to IFC’s “Portlandia,” Within and Without largely managed to inspire every more enthusiasm among the growing fan base instead of fomenting the dreaded rapid-fire backlash. In some respects, then, Greene had a lot of incentive to maintain the course with his follow-up. To his credit, he’s instead made something that unmistakably sounds like Washed Out, but is clearly moving forward. Within and Without, for all the evident skill on it, could get a little monotone and dull. As if recognizing that, Greene has expanded his sonic palette, nicely avoiding creative stasis.

I suppose some might characterize it as some sort of crass grab for more commercial success, and there are certainly song on her I can imagine reaching unlikely ears, such as the soaring, casually anthemic “All I Know” and the cheerily pleading single “Don’t Give Up” (“Even though that we’re far apart/ We’ve come so close and it feels so right/ Don’t give up”). To me, it comes across as more of a welcome redrawing of genre borders, bringing different dynamics, nuance and, yes, catchiness to the sloping intoxication of chillwave. Greene has made a point of letting people know he experimented with a lot of different instrumentation on the album, drawing in a small fleet of retro keyboards, for example. It’s not just him manipulating sounds in a computer. He wants the listener to know there’s genuine musicianship at play on the record, something that’s clear from the subtle, engrossing complexities of “Great Escape” or the New Order fullness of “Falling Back.”

The album generally has a lightness about it that sets it apart from prior Washed Out efforts, which could stall out on their own mild dourness. “Falling Back” starts so tingly sweet that I half-expected a time-traveling Sandy Denny or Jackie DeShannon to pop in to handle lead vocal duties, perhaps referring to someone as “starshine” along the way. Greene may not be as chipper as that (the song is called “Falling Back,” after all), but there is a warmth and fullness to his voice—and a greater willingness to bring it to the forefront—that helps maintain the strength and positive energy of the clicking, stirring music. Even album closer “All Over Now,” its title suggesting a downbeat ending, announcing, “fear is at an end here,” before sending Paracosm floating off into a dusky sky that’s somehow comforting instead of foreboding. This is partially attributable to the confidence Greene brings to the endeavor. If his previous work hinted that the success of Washed Out was sometimes slightly outpacing his ability to keep up with sufficiently interesting material, Paracosm announces that Greene is now completely in command.