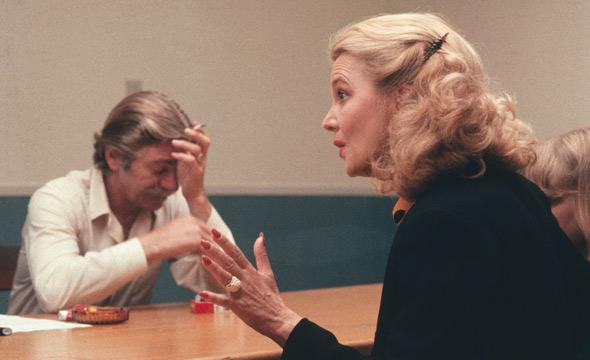 Despite his reputation as a staunch humanist, an actor’s director and an inveterate improviser generally uncomfortable with underlying symbolic significance, John Cassavetes was never above reducing his characters to representative types. This never led to the diminishments of stereotyping, and however axiomatic they may have been at their cores – designed to signify specific modes of behavior – these characters were always complemented with layers and layers of individual shading and personal foiblage. The three men in Husbands, each with his own style of harried desperation; the family in Shadows, their personal experiences defined by their placement on a chromatic/racial scale; the lovers in Minnie and Moskowitz, a mismatched pair who nonetheless bond over their matching brokenness. The classic Cassavetes formula is a process of personal alchemy that occurs via the blending of differing standards of conduct, something accomplished through torrents of furious shouting, waving and wringing of hands, by which these people impart bits of themselves in others, attaining, at least in his happier films, some rough level of balance.

In Love Streams, the last proper Cassavetes movie and in many ways the best, the core schematic figures are two siblings, each with a different outlook on and approach to life, each plagued by some level of emotional imbalance. Cassavetes plays Robert Harmon, a Norman Mailer type who’s all about romance, specifically of the down-and-dirty masculine variety. He styles himself as a roughneck lothario, embarking on transparent research missions that find him doggedly pursuing uninterested beauties, or simply stocking his house full of hookers with hearts of gold. His sister Sarah (Gena Rowlands) is a mirrored opposite, a woman who claims that the sexual side of her is dead, yet remains overflowing with jittery emotional energy. She unloads this manic vigor by making visits to the homes of the sick and dying, bringing along her young daughter, the sort of inappropriate parental activity that causes the girl to defect when Sarah and her estranged husband finalize divorce proceedings.

So at the film’s heart are two basic types. One has too much love to give, one has too little. Sarah helplessly projects outward, attempting to balance an overabundance of emotion by venting sputtering affection upon the elderly, children and small animals. Robert is a sponge who soaks up unhappiness, feelings which allow him to sustain his misery while technically synthesizing it into something productive. He seems determined to suffer for his art, at one point going out of his way to get himself punched in the face. In documenting the minimal progress of these two characters, as they make more of the same mistakes they’ve been making all their lives, Cassavetes also charts the course of love as it enters and exits their lives. Love travels, as noted in a repeated line of dialogue referenced by the title, in streams, without ending or beginning. 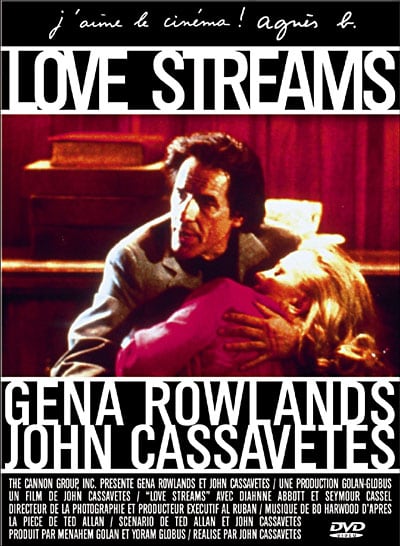 This indicates eternal connection, in some sense, to the things and people we choose to love, but also unpredictability. Like the film’s climactic rain storm, the streams of love run with wild abandon, coursing through lives with destructive force, not always in the most convenient direction. Robert shows a deep affection for his sister, and a different sort of affection for the women who fill his house and bed, but he has no connection to his son, who shows up abruptly in the middle of the film, dropped off by a mother desperate for a last-minute babysitter. Robert carries the boy around like a toy he can’t figure out how to operate, subjecting him to his creepy Hugh Hefner-ish lifestyle, plying him with beer and eventually leaving him discarded in a Las Vegas hotel room. It’s a reminder of how children have always acted as emotional barometers in the director’s movies (the young boy in Gloria, the doomed fan in Opening Night). Stand-ins for the unruliness of the world, the protagonists’ inability to deal with them mirrors their own inability to face the vagaries of reality.

This is a common theme for Cassavetes, who’s always digging for truth within a welter of shambolic emotional wreckage, and the film feels most familiar in the way it works doggedly to the heart of interconnected dysfunctional relationships. Yet the biggest breakthroughs in Love Streams are formal, not emotional. Working off a steady narrative foundation, adapted from a play by Ted Allan, Cassavettes takes a much more controlled approach to presenting all this disorder, eschewing the usual practice of gritty handheld shots for composed, controlled ones that ground the madness within neater frames. This keeps the film on an even keel as it progresses, even as it grows more baroque, with narrative development determined via absurd events rather than verbal revelations, the last forty minutes devoted to a quasi-surrealist fugue that incorporates the aforementioned thunderstorm, some prowling animals and elaborate dream-sequence hallucinations.

Dotted with references to themes and subject matter from previous films, most noticeably the setting (Cassavetes’ own house, previously featured in Faces), actors (mostly members of the director’s stock company), and images, Love Streams serves as a culmination and capstone of his career. These elements come together in a blossoming outburst of feelings and ideas, with the rich visual and narrative text contributing to a last act full of moments which skirt the edges of reality while still feeling insistently real. These include a scene where Sarah brings home an entire menagerie of animals, hoping to jumpstart Robert’s creaky heart with some cute creatures, to the operatic hallucination scenes, to the brief moment where Robert has a vision of his new dog as a naked, bearded man. Like that helpless, naked creature, unwisely gifted to a miserly emotional cripple by a borderline lunatic, love isn’t something we decide upon rationally. Cassavettes holds that it’s a throbbing, primal force, one that, with enough care, attention and practice, can be guided to a place of relatively placid happiness.